The following paragraphs present the different ways of how teenagers in a broken family cope with their problems. It is first summarized after the divorce of the child’s parent followed by its effect on the child until it reaches its youth days.

After the Divorce of the Child’s parents

According to Green (2014), after divorce, children of all ages may experience deficits in emotional development and may seem tearful or depressed, and that can last several years after a child’s parents’ have separated.

Turn in your highest-quality paper
Get a qualified writer to help you with
“ Broken Families and Social Problems: Effects and Coping styles ”
Get high-quality paper
NEW! AI matching with writer

Some older children may show very little emotional reaction to their parents’ because they are actually bottling up their negative feelings inside. This emotional suppression makes it difficult for parents, teachers and therapists to help the process her feelings in developmentally appropriate ways. In school most of the children with broken families end up having poor academic and change of lifestyles. This poor academic progress can stem from a number of factors, including instability in the home environment, inadequate financial resources and inconsistent routines.

Divorce affects children’s social relationships for several ways. Some children act out their distress about their broken family by acting aggressive and by engaging in bullying behaviour, some may experience anxiety and can make it difficult for them to join co-curricular activities, and develop a cynical attitude towards relationship, harbour feelings of mistrust towards both parents and potential romantic partners. At home their lifestyle will change, more chores, heavier responsibilities, and the older sibling may have to act a parental-type role when interacting with younger siblings.

Children of divorce tend to fall in their academics and in their social life. Children are already affected when the divorce is on the process, not before.

Effects on the child to its youth days

Children are most likely to move or change school after divorce and can’t catch up with making friends and their academics. Most of the children who don’t know how to cope with their situation ended up having low self-esteem, anxiety, and trust issue. (Mann, 2011) And there is a higher suicide rate for children of divorce than for children of normal families. There is no correlation found between the death of a parent and suicide of a child. The suicide seems to be triggered by being rejected by a parent. (Larson, 1990) In general, children of divorce feel emotionally unsafe as a child. Most of them don’t feel any attention and are 6 times more likely to feel alone as a child. When in need of comfort they do not go to their parents. (Marquardt, 2005), they are mostly unhappy, behave impulsive and irritable. They are socially withdrawn and as a result, they feel lonelier, insecure, anxious, and are less obedient to their divorced parents. (Wallerstein, 1991)

The so called “sleeper effect” kicks in on children of divorce on a later age. Most Young boys tend to express their emotions and frustrations freely. Their emotions fade out. Young girls however, keep their emotions internally more often. They do not deal with them. Their emotions stay within and they surface when they mature. Usually, this occurs in a period in which they make essential decisions for their lives for many years to come. They are unconsciously influenced by the anxiety and fear resulting from the divorce of their parents long ago. (Wallerstein & Blakeslee, n.d.) If children are confused with different things going on in the family or at school and they have feelings of frustration, more disagreements may occur. Behaviour problems tend to increase for boys when a step-father is introduced to the family (Muzi, 2000).

It is said that half of the world’s community is plagued by broken families and crime. Over the past few decades, marriage has become less important and that is the cause of the problem. Better parenting and stronger families is the key to mending the broken society. (Problem of the Broken Family, 2014) In single family homes, children develop greater autonomy where they tend to spend more time alone or with peers. It was found that sons are more likely to resist directives and rules, where as daughters typically have a closer relationship to their mother (Freeman, 2002).

However, if mothers inappropriately discuss financial matters with their children or express a negative feeling toward their ex-spouse, it can decrease the desire for the child to spend time with the parent due to increase confusion about the whole situation (Bigner, 2002). Adjusting issues that children may have include academic problems, internalizing and externalizing problems, low self esteem, and early engagement in sexual activities (Anderson 1999)

It is said that half of the world’s community is plagued by broken families and crime. Over the past few decades, marriage has become less important and that is the cause of the problem. Better parenting and stronger families is the key to mending the broken society. (Problem of the Broken Family, 2014) Families are the core of society. When families fall apart, society falls into social and cultural decline. Ultimately the breakdown of the world’s family is at the root of nearly every other social problem and pathology. Most children grew up in intact, two-parent families. Today, children who do so are a minority. Illegitimacy, divorce, and other lifestyle choices have radically changed almost every family, and thus have changed the social landscape. “There is a mountain of scientific evidence showing that when families disintegrate, children often end up with intellectual, physical and emotional scars that persist for life.”

He continues, “We talk about the drug crisis, the education crisis, and the problem of teen pregnancy and juvenile crime. But all these ills trace back predominantly to one source: broken families. (Zinsmeister, n.d.) Broken homes and broken hearts are not only the reason for so many social problems. They are also the reason for the incumbent economic difficulties we face as a culture. The moral foundation of society erodes as children learn the savage values of the street rather than the civilized values of culture. And government inevitably expands to intervene in family and social crises brought about by the breakdown of the family. Sociologist Daniel Yankelovich puts it this way: people suspect that the nation’s economic difficulties are rooted not in technical economic forces (for example, exchange rates or capital formation) but in fundamental moral causes.

There exists a deeply intuitive sense that the success of a market-based economy depends on a highly developed social morality–trustworthiness, honesty, concern for future generations, an ethic of service to others, a humane society that takes care of those in need, frugality instead of greed, high standards of quality and concern for community. These economically desirable social values, in turn, are seen as rooted in family values. Thus the link in public thinking between a healthy family and a robust economy, though indirect, is clear and firm. (Anderson, 1994) 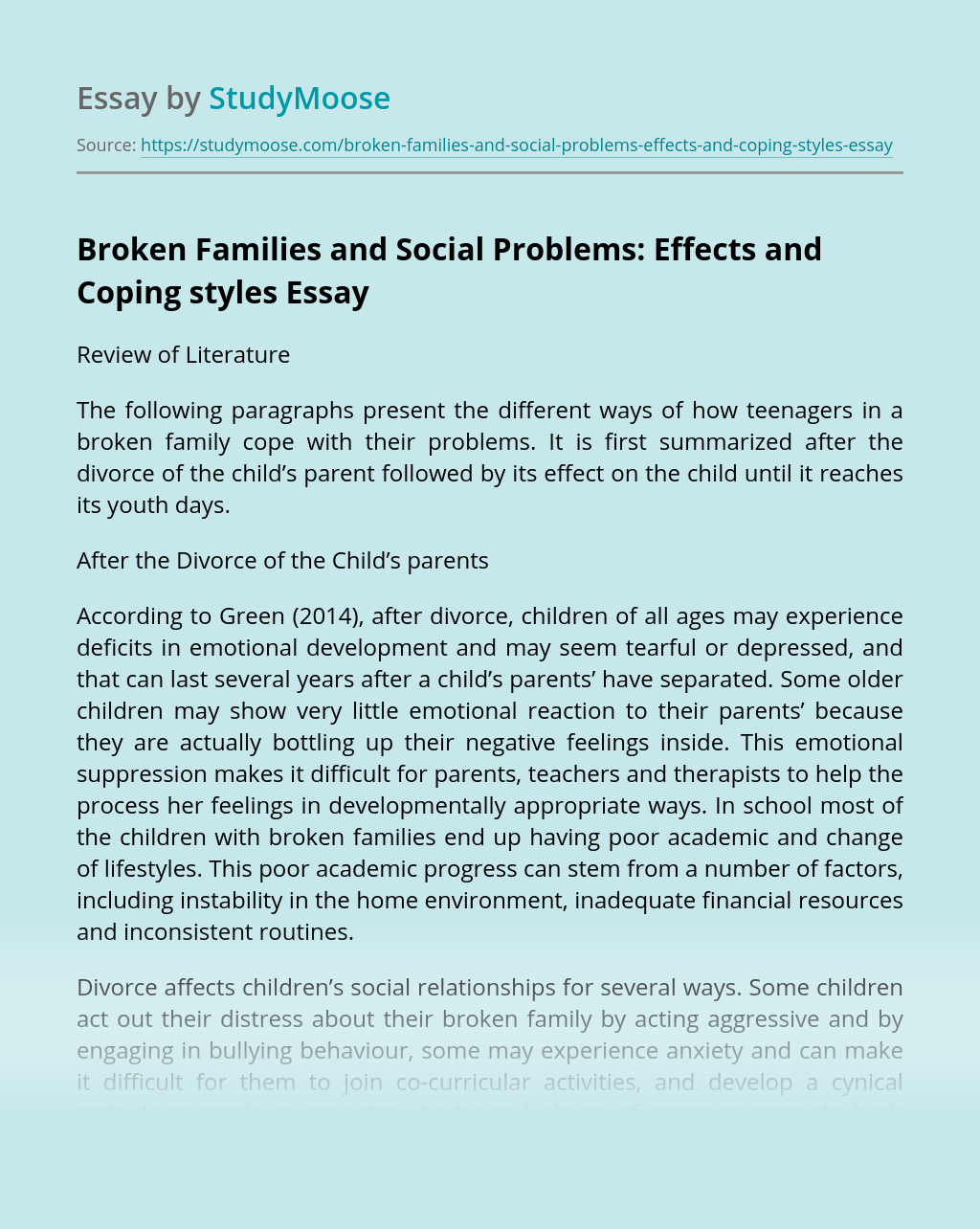 Turn in your highest-quality paper
Get a qualified writer to help you with
“ Broken Families and Social Problems: Effects and Coping styles ”
Get high-quality paper
Helping students since 2015
Stay Safe, Stay Original