The fabric of any society is held together by the standards of morality that we maintain and practice. Values are our personal set of beliefs about what is important, unimportant, right, wrong, good and bad. When we are confronted by choices, options, or moral dilemmas, the decisions we make will indicate what values we hold. Human values give worthiness and respect to life. The foundation of human values are based on · Dignity of human life · Respect and consideration for the “other” · The importance of integrity and service · An attitude of non-violence · The individual and collective quest for peace and happiness.

In other words, values are a kind of a map in our minds of how things are or should be. Values are only our perception of the principles of nature that govern our lives or the universe, and not these principles themselves. People think that there should be a specific set of principles protecting and governing all human beings. However, others believe that values can be accepted in one culture and rejected in another culture.

This idea is based on the belief that moral principles differ across cultures.

Our moral values are our beliefs about what is important in life. Some values refer to how one should act (be honest, altruistic, self-disciplined) while other values refer to what one wants to accomplish or obtain in life (a lot of money, fame, a family, friendships, world peace). Because a person cannot “have it all” or “be all things,” priorities must be set and choices made.

Setting your priorities often leads to value conflicts. We may want to be successful in your career, but we may also want a more relaxing lifestyle and more time to spend with friends and family. Here, the value of success may come into conflict with the value of family. Some examples of moral values are: integrity, respect, caring, justice, civic virtue, and openness.

Anyway I am worried about the fact that our society is in moral decline. Morality is a very broad and complicated topic due to the fact that it is based primarily on individual opinions. Moral values constantly change with the generations. However, most people would agree that today’s moral values are more tolerant of behaviour that, a generation ago, would have been considered obscene and immoral. For example, sex on television is accepted by today’s public as normal, but until the 1980s one could hardly say the word “sex” on television without being condemned. Yes, our society is currently in a rapid decline of moral values. Judging by current statistics, all that once was immoral is now considered moral. It seems as though people have lost their conscience and are now controlled by their surroundings.

The majority of youth all over the world know very little about Moral Values. Very often the behaviour of children in society proves that moral values are hardly even a subject of importance. Today, the violence and crimes often occur when a troubled teen or a fragile child cannot handle the pressure and stress of reality. The influential factor of violence spreads so easily; a child finds this influence simply by turning the television set on. In fact, any news channel unfortunately shows the actions of teenagers committing the violent act of murder without any remorse. All of this animosity and chaos within children begin with not knowing the difference between the right and the wrong. But something should be done.

The positive influence of religion, education, and peers greatly effect a child’s manner and behaviour. Traditional values and important lessons from these sources certainly help a child to understand the distinction between right and wrong choices in life. An important value for children to be aware of is the benefit of religion. The church teaches children to accept the existence of a being higher than man and gives a child the possibility to learn the moral values the way the Bible presents them. By understanding the responsibility of choice making, young people learn to think about the consequences or aftermath of their decision. Religion serves as a foundation for knowing the difference between the right and the wrong. The involvement of religion better prepares children for certain difficulties in life.

The value of education is an important tool that induces the growth of young people to a more sophisticated level. Education builds knowledge and integrity into the minds of children. School also guides children away from trouble; with essays and math problems, a child has no time for trouble. Parents must emphasize the importance of education to their children. Education strengthens the capabilities of the youth. A child becomes a better individual when he experiences the goodness of church, education, and friendship; that is the relevancy of values and lessons. In order for the nation to minimize crime, the children of this generation must reevaluate their choices and responsibilities in life.

They also need the assistance of parents and teachers for guidance through the tough reality of today’s decision making. The aim should be to produce morally viable, responsible individuals and not scholars. Sadly today the virtues like honesty, integrity and respect are considered old fashioned. There has been gradual erosion in these values. The growing crime rate among the children in the developed nations is a good instance of lack of moral values.

Whenever and wherever preference is given to materialism over moral values, it leads to total chaos. No one can be at peace, be it an individual, a community, a nation, or the whole world. Moral education is not something that can be imposed on someone from outside; rather it is a way of life.

Fast changing society has its special problem – old social structures go away and replaced by new ones. Hence the old moral values get into the clash with the new ones, and this is not a clash of different social groups, this is a clash inside one person. Market based society, which by its nature breaks boundaries between individuals, creating more opportunities, creates moral problems. As a result – there are two sets of contradicting moral values in the person’s mind and there is no balance. These are the examples – changing relationship between sexes, between employer and employee leading to the internal conflict of moral values.

It is matter of great concern and regret that today upbringing means providing good food, clothes and luxuries of life only. Moral values are no longer an integral part of a child’s rearing up. Some years back, grand parents provided moral education to grand children in the form of bedtime stories.

There is no more powerful creature for a child than parents. The system of learning and adaptation to the life and society in particular is based on hungry absorption by kids of behavioural patterns and ideas from parents. Parents share subconsciously and freely with their kids all they know up to the point, when kids get problems. Actually it is very hard to limit voluntarily parental control, even harder to find the right balance. At least subconsciously, adults perceive their kids as a continuation of themselves. This perception produces protective and controlling behaviour, which kids need to survive and learn. However there is an important kid’s need which adults do not perceive – the need to learn how to make decisions and the need to make them. I mean real decisions, which carry serious consequences, decisions which adults make all the time, which no adult can avoid, and which adults do not want to avoid, because they are the essence of the life.

Drugs and crime endanger the survival potential of youth and parents as well as educators. They endanger children’s future and threaten the very fabric of society. Drugs inevitably lead to ruined lives. Harmful actions and criminal behaviour bring unhappiness, and not just for the victim but the perpetrator as well.

In today’s world, teaching youth the difference between right and wrong is not just a good idea, it is a vital action that directly relates to the survival potential and happiness of children and society. As an educator and one who truly cares about the well-being and future of our children parents really have an opportunity to help young people steer away and stay away from lives of drugs and crime.

A little reflection will show that most of great men were great because they were more humane than the rest of us. With total chaos and dwindling moral values, and a mad rush for material comforts, it has become clear that it is only moral education that can bring solace to the otherwise tormented soul. 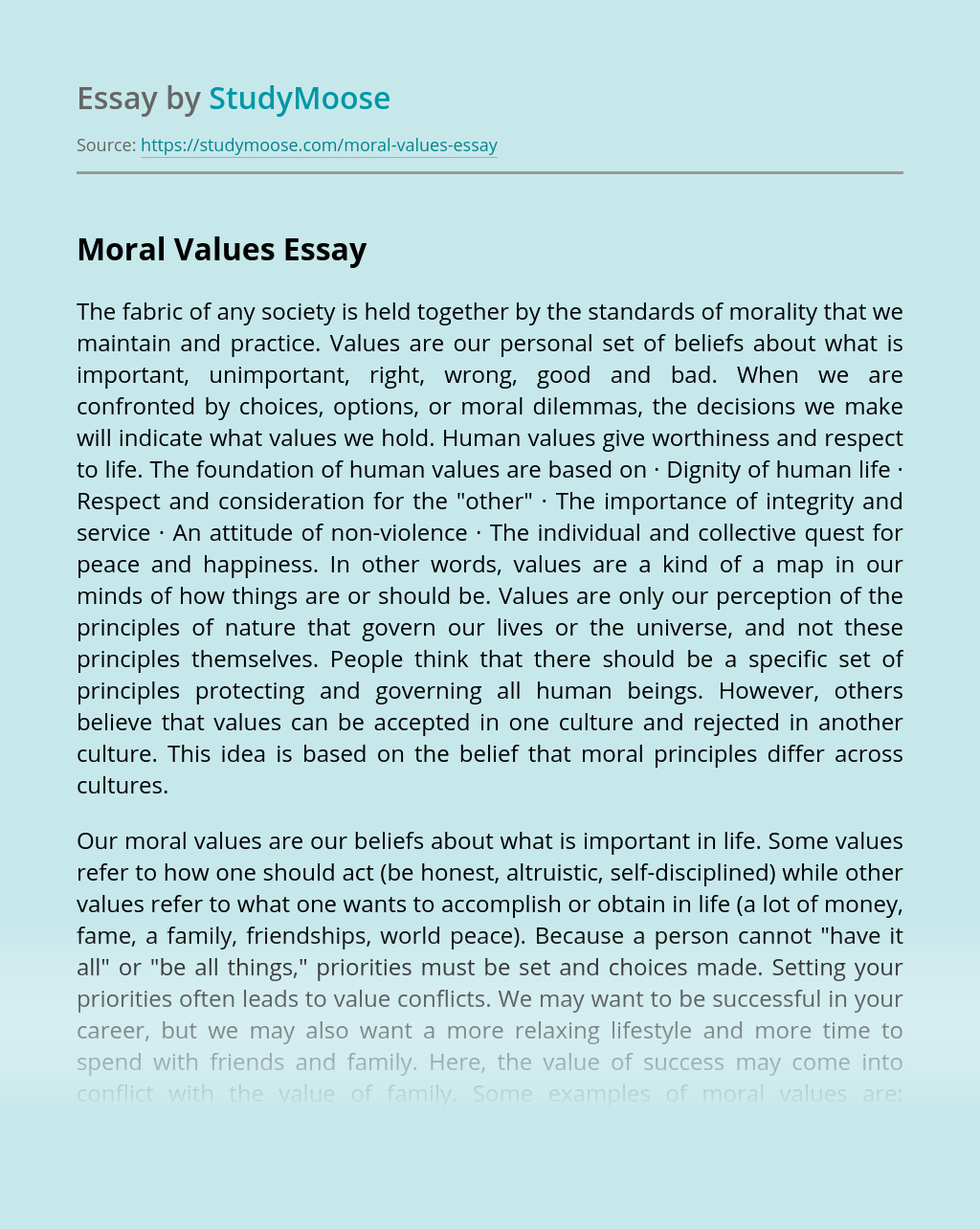