Setting is the factor that influences characters actions and can overall, alter their cultural morals and values. Those who come to embrace their culture will more likely be successful. In Joseph Boyden’s novel Three Day Road he demonstrates that when an individual is placed in an environment that differs from their origins, they will need to adapt which results in them diverging from their own values, compromising them in the process.

In the heart of World War I, Xavier and Elijah experience the hardships of war and get dragged deep into battle, while hiding under enemy lines, fighting for survival.

Don't use plagiarized sources. Get your custom essay on
“ Three Day Road ”
Get custom paper
NEW! smart matching with writer

The main difference between the two characters is that they cope and internalize what they witness and experience in entirely different ways; one in a positive manner and the other in a negative fashion. The entire story revolves around the war, which makes setting an essential part.

Moreover, since the setting does shift back and forth, it adds a different aspect to the story; flashbacks.

Residential schools are designed to help cree children, but in reality it harms them beyond repair.

They are isolated, their culture is belittled, removed from their homes and parents, separated from some of their siblings and in most cases forbidden to speak their own language (Miller 4). Xavier and Elijah both went to residential schools as children.

Elijah, unlike Xavier has a gift for language which he welcomes and embraces to an extent where he begins to disregard his own culture and morals. This is evident in the fact when Elijah calls Xavier a “heathen” for not knowing what the Abitibi River is (Boyden 163). This also goes back to the fact where the nuns originally teach Elijah that the Cree are “heathens” and that they “anger God”( Boyden 56). This is where Elijah’s morals and values are shaken, forgetting his true identity.

In contrast, Xavier also has his share of memories during his time in residential schools. The only difference is that Xavier’s morals and values were not shaken as he held tight to his cultural beliefs. Throughout the novel Niska seeks Xavier and says this: “ I came to ask you if you would prefer leaving here and and going into the forest to live with me. You did not hesitate… ‘Yes Auntie’ ” ( Boyden 218). The fact that Xavier did not hesitate once when asked clearly illustrates his desire to hold on to his culture.

This also proves the fact that his time back there was nothing but torture, awaiting to be free. Going back to live with Niska gave him a chance to learn more about his ancestors way of life. Xavier and Elijah share similar experiences in residential schools, the only difference is one begins to assimilate while the other stayed true to his values which resulted Xavier being much more successful.

Xavier and Elijah’s experiences in World War 1 can also remind an individual that circumstances can smudge the line from what is morally correct to morally incorrect. Though most people are taught the inalienable right to life and respect for the lives of others, soldiers who once killed for necessity can become caught up in the glory of the battlefield. Xavier’s childhood friend, Elijah becomes known as the famous sniper with most kills.

This is where he begins to view killing as a game. His desire for killing is shown when he begins to collect the scalps of men in which he considers as trophies. Elijah not only strives for the desire of killing but also the desire to gain recognition from the French hunters. “And what will collecting these trophies do for me?” Elijah Asks. “They will buy you honor among us” Francis says. “And we are honorable men”(Boyden 204).

This is where Elijah’s desire for killing grows bigger. Because of Because of these certain influences his hunger for praise makes him do things that are unimaginable in hopes of gaining the praise to be someone bigger, stronger and much more powerful. Initialyy, Xavier is much more revolted by the sight of death soon after he witnessess a death devestating a german, saying. 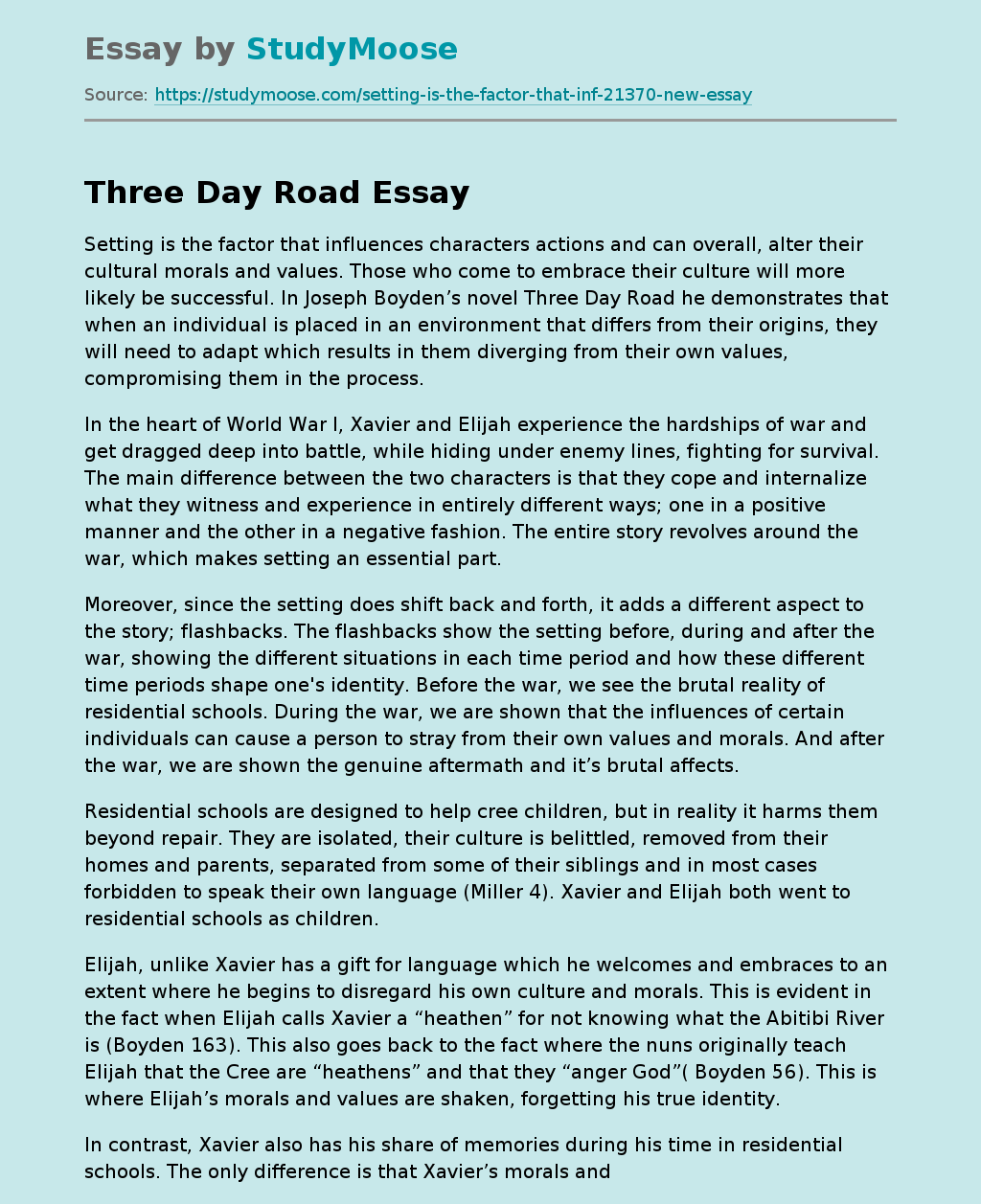