“Think positive. ” This is a suggestion that people often make to those who are worried or troubled by certain things. People who are diagnosed with serious or terminal illnesses are encouraged to maintain a positive outlook. They are encouraged to fight their illness by thinking that they will be cured. The rationale behind these is the principle or theory that positive thoughts lead to better health or well-being. In other words, optimism and better health go hand in hand. The relationship between optimism and health has been greatly explored by psychologists and other behavioral scientists.

Don't use plagiarized sources. Get your custom essay on
“ Think positive ”
Get custom paper
NEW! smart matching with writer

Numerous students have been conducted to determine whether a positive relationship does indeed exist between the two factors. Other studies have looked at other factors that affect positive thinking and its relation to health as well. A study conducted by Suzanne Segerstrom (2007) aimed to determine how optimism and the availability of resources affect each other. At the same time, part of the study’s goal was to show the effects of both factors on the health and well-being of an individual.

The study was conducted over a 10 year span.

The study’s sample was composed of former law students. Segerstrom (2007) focused on dispositional optimism and its relation to both resources and physical and mental health. The main findings of the study may be summarized as follows: “More optimistic first-year law students made more money 10 years later, but income did not predict later optimism. More optimistic students did not have larger social networks 10 years later, but increases in social network size predicted increased optimism.

These changes predicted mental and physical health. (Segerstrom, 2007) Furthermore, Segerstrom (2007) found that physical health was more affected by the absence of pessimism rather than the presence of optimism. What this finding suggests is that negative thoughts are what hinder better health. In essence, Segerstrom’s study only shows that optimism cannot influence physical health in such a way that it will make it worse. The study does not show that optimism can indeed lead to better health. The validity of Segerstrom’s study may be questionable due to its limited scope.

The study only considers former law students. Thus, people in other careers or professions may have different experiences. Thus, the study cannot be taken as a clear indication of the relationship between the two elements. In another research, Tugade et al (2004) studied how positive emotions affect or influence coping and health. The focus of this study was on the mental health of individuals particularly those who are in the process of recovering from negative events in their lives.

The main problem with studies concerning these two elements is that there is no clear way to quantify and measure optimism. Since optimism is basically a frame of mind, it is difficult to measure it. Its effect on health cannot properly be determined without a way of measuring one’s level of optimism. As such, just as the two studies have shown, other elements must be taken into consideration as well. When this problem is properly dealt with, it is indeed clear that optimism can lead to better health both in the physical and mental aspect. 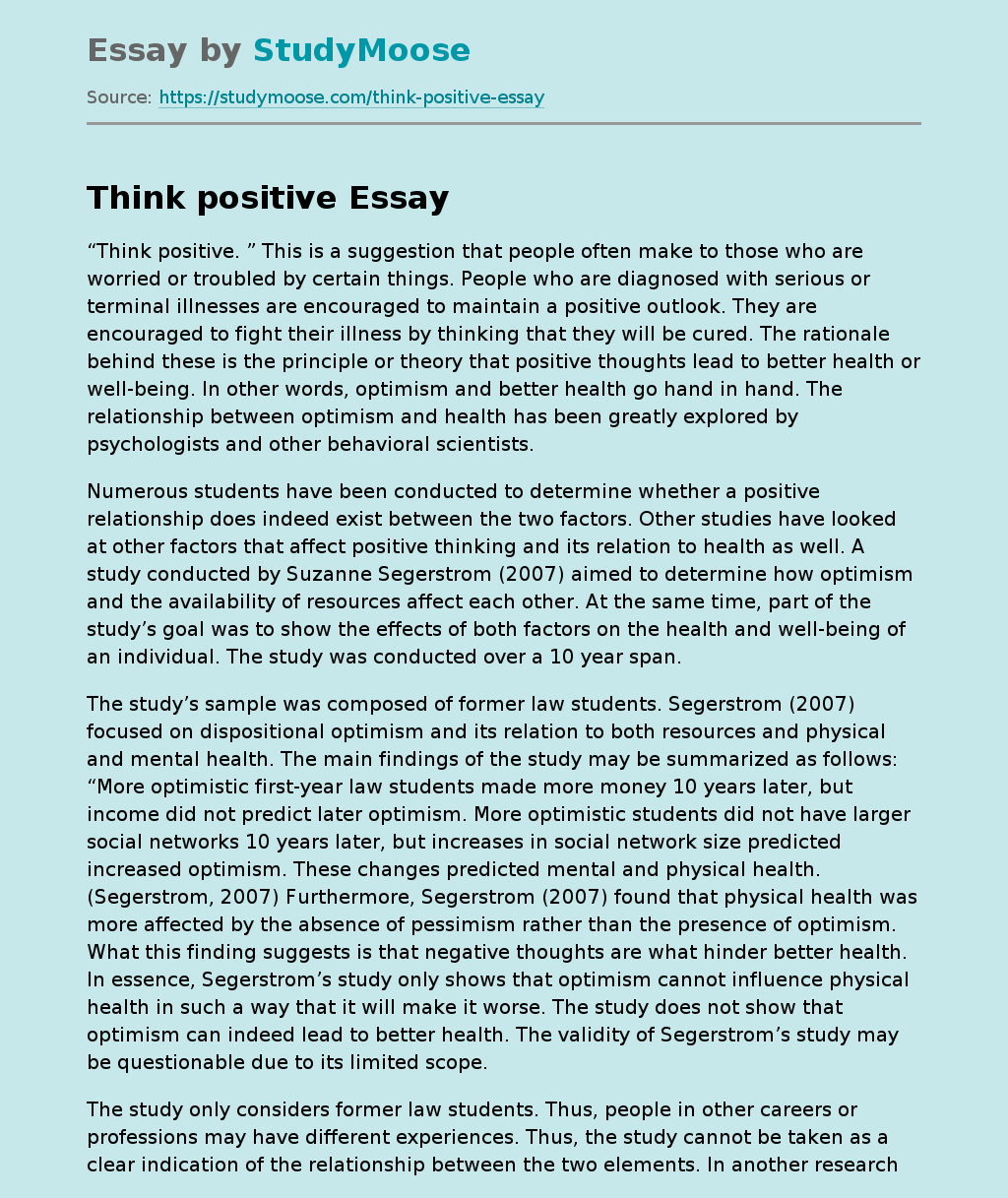