Speech on Mandatory Yearly Driving Tests for Those Over 65

Today I will be talking to you about elderly drivers and mandatory yearly driving tests for those over 65. Have you ever been driving to work or school and get stuck behind an older person going 10 miles below the speed limit? Or an elderly driver that merges into your lane without looking? Many elderly drivers are not in the proper state to be driving on their own. I have experienced this first hand. My car was sideswiped in my very own neighborhood by my elderly neighbor.

Don't use plagiarized sources. Get your custom essay on
“ Speech on Mandatory Yearly Driving Tests for Those Over 65 ”
Get custom paper
NEW! smart matching with writer

She was driving down the road and saw another car coming, she moved to the opposite side of the road and hit my parked car. After denting the entire passenger side of my car she said that she hadn’t been driving in 25 years and didn’t see my car parked there. If she had taken a driving test before getting behind the wheel after 25 years than this entire incident could have been avoided. These elderly drivers should not be allowed behind the wheel of a car until they have proven that they are capable of driving or taken a driving test.

They have many health problems that negatively affect our traffic safety and these mandatory tests can reduce that risk.

Elderly people are potentially dangerous drivers. One of the major causes of elderly accidents are due to vision loss. After the age of 65 the risk of blindness and vision loss raises significantly. Driving on the road when you have a vision impairment is extremely dangerous.

Although this is true, this does not stop many elderly people from driving. According to a visual impairment project in Australia, one in three elderly people have vision less than the legal driving requirements. As you get older it is more difficult for your eyes to adjust to changes in light, this makes it more dangerous to be driving at night and early morning. Certain eye diseases are huge contributors to car accidents within the elderly community. Diseases such as cataracts and glaucoma, which are very common in those over 65, makes it harder to read signs and see colors. This can result in someone running a red light or running through a stop sign. As you get older your reaction times become slower making multi-tasking harder and sometimes overwhelming to those over 65. They cannot process information as quickly so they may see a car stop short in front of them but because their reaction time is slower they are not able to break in time. They also may not be able to judge the gaps in traffic and are not able to make turns and merge in traffic as effectively. With old age comes different health problems which could be potentially dangerous while driving. Arthritis causes the joints to stiffen making it harder and more painful for them to grab the steering wheel and make turns. Parkinson’s disease causes the person to shake which affects their ability to make turns and hit the gas pedal. This may result in them hitting the gas instead of the break.

With the increasing amount of elderly people in our community, especially here in south Florida during the winter season, it is taking a toll on our traffic safety. Drivers over 65 have the highest accident rates per miles driven. In a 1997 NHTSA study 9% of the population were elders but accounted for 14% of all traffic fatalities. And this number is continuing to grow more and more every day. It is predicted that by the year 2050 the number or elderly drivers will triple to around 67 million.

A solution to this issue is requiring all people over 65 to take a mandatory yearly driving test. In 2004 a Florida law made it mandatory that elderly drivers must pass a vision test before getting their licenses renewed. This cut the death rate among elderly drivers by 17%.But just simply having them take a vision test is not enough. These issues are not solely focused on vision. As you get older it effects your hearing, remembrance, and physical well-being. If the death rate could be reduced that much by just having them take a vision test imagine what it would be if we had them take a full driving test, which includes hearing, physical capability, mental state, as well as basic road rules knowledge.

In conclusion, those over the age of 65 should have to take mandatory yearly driving tests to assure that they are capable of driving. The fact is that, as you get older you can’t see as well, your reaction times slows down, and you develop health problems that are too dangerous to be operating a motor vehicle. These health risks effect today’s traffic safety. By taking these driving tests we can help reduce the amount of traffic accidents and fatalities.

Speech on Mandatory Yearly Driving Tests for Those Over 65. (2016, Feb 26). Retrieved from https://studymoose.com/speech-on-mandatory-yearly-driving-tests-for-those-over-65-essay 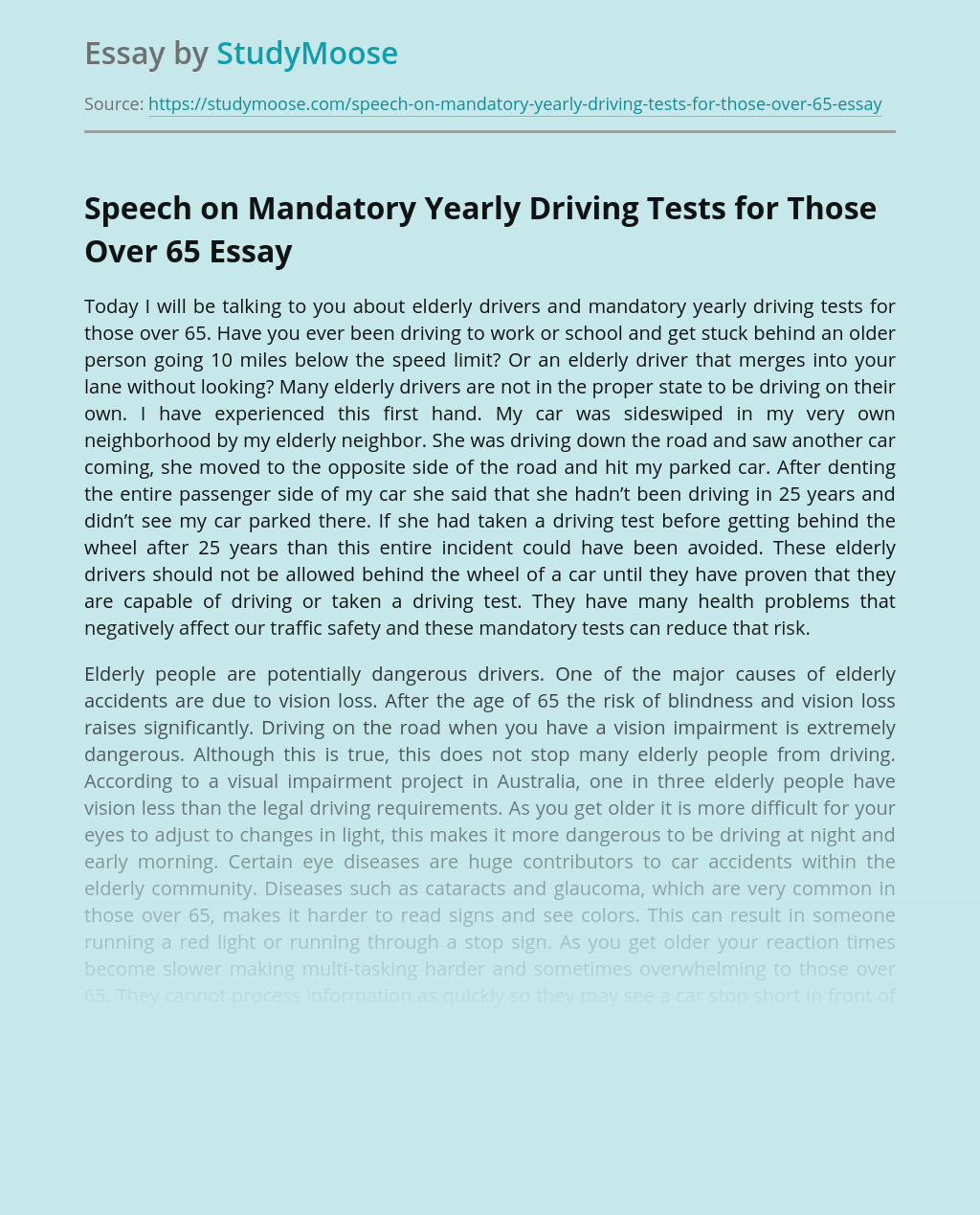