The Pros and Cons of Mandatory Military service

All over the world there are countries debating whether or not they should enforce a Mandatory Military Service for citizens who are at least 18 years old. This could affect the countries in two different ways. It could strengthen the country, or it could weaken it. The question is, which of the two is a more prominent outcome?

A mandatory military service would mean that a country is prepared for the worst. If, say, a war did break out, it would mean that they would not have to spend as much time recruiting because they would already have trained soldiers there, allowing them to have a head start in the battle side of war.

Turn in your highest-quality paper
Get a qualified writer to help you with
“ The Pros and Cons of Mandatory Military service ”
Get high-quality paper
NEW! AI matching with writer

It would also mean that they would never have a shortage of soldiers. There are often times in war, where voluntary sign up to the army has proven unreliable and that the patriotic surge at the beginnings often runs out within a year or so. “Conscription during peacetime would mean that the country was prepared for emergencies” (‘Dabatepedia’, dbp.

idebate.org, ‘Debate: Mandatory Military Service’). Having this constant replenishment of soldiers would definitely give the country an advantage.

An advantage in war is all well and good, but having to join the army against their will, even for a small amount of time, can cause bad attitudes towards authority in young people. This can cause them to be reluctant to learn new skills and to build on character, which are two things that are supposed to seen as perks to the service.

The debatepedia website says: “If young people are forced to go into the armed forces …. it will foster resentment against authority”.

The perks of mandatory military service could definitely appeal to young people who are recent school leavers. There are many cases of people who leave school and are unsure of what to do from then on, but the military service provides a temporary place to go while still in this period of insecurity and can be seen as a sort of save haven for people in this situation. It would also lessen some of society’s problems, such as teenage pregnancy and crime rates. “Would you like to see crime, teenage pregnancy and substance abuse rates decline? … this is an argument for mandatory military service” (Armstrong Williams, “Mandatory Military Service Would Benefit the US”, News Max. June 19th 2006).

Although the Military can prove to be a place to go for those in need, it can be argued that forcing youth into service deprives them of their ‘freedom of choice’ (debate.org, “should military service be mandatory?”). This deprivation is, of course, a deprivation of a human right, making mandatory military service immoral.

In conclusion, Mandatory Military Service can both benefit a country and hinder it. The outcome of the system, good or bad, depends on how the individual country carries it out. For example, the general conscription could mean a respectful nation with low crime rates, or a rebellious nation, with bad thoughts on authority figures. Overall, Mandatory Military Service is neither good nor bad.

The Pros and Cons of Mandatory Military service. (2016, Mar 09). Retrieved from https://studymoose.com/the-pros-and-cons-of-mandatory-military-service-essay 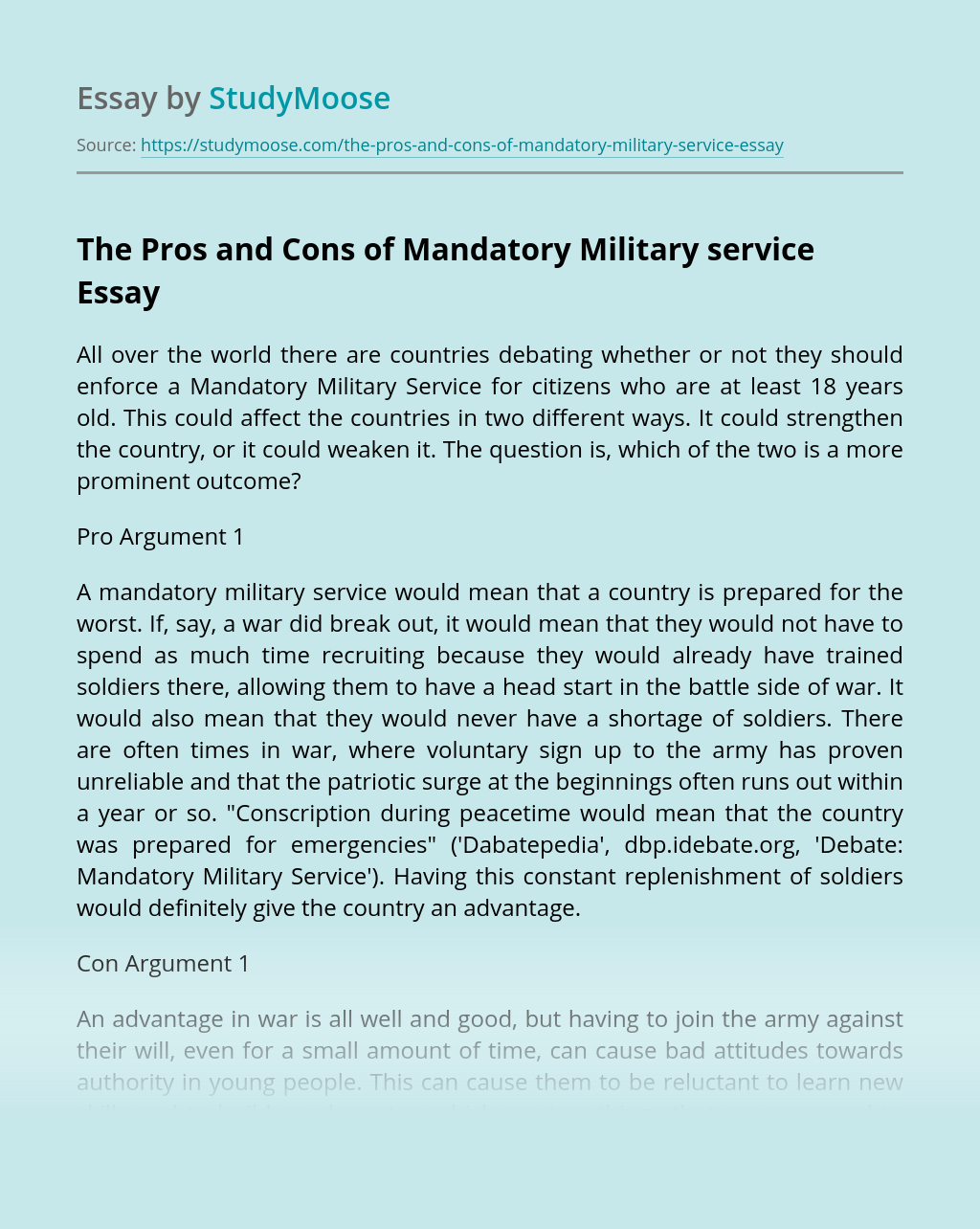 Turn in your highest-quality paper
Get a qualified writer to help you with
“ The Pros and Cons of Mandatory Military service ”
Get high-quality paper
Helping students since 2015
Stay Safe, Stay Original