Cause and Effects of Texting While Driving

Texting while driving is a major issue affecting today’s society. Texting has grown to be one of the biggest forms of communication among people, despite the fact that some of these messages might be sent from behind the wheel of a moving vehicle. As a result, distracted driving often occurs removing the main objective a driver should be focusing on; the road ahead. Texting-related vehicular accidents and fatalities have caused a majority of states to establish texting bans, making this act illegal while driving.

With texting-related accidents increasing, new approaches and resources are being developed to eliminate this epidemic problem. It is imperative to express awareness that performing the illegal act of texting while driving is a dangerous behavior that not only causes distracted driving but also impairs the driver’s ability to lose focus on the road with the possibility of severe consequences.

Text messaging is becoming the commonly used method in our connected society today. People of all ages can be seen using modern day devices such as cell phones and tablets.

“Six billion SMS (short message service) messages are sent every day, while 2.2 trillion are sent a year within the United States and 8.6 trillion text messages are sent globally each year” (CNN.com). These devices allow its users the mobility and immediate accessibility to communicate with each other. With this in mind, some of these outgoing messages are sent while driving.

The reasons can vary upon why a person would text and drive but, one possibility can be linked to its convenience.

It is not uncommon to see a person fully indulged in their device; checking texts and emails or social media platforms such as Facebook, Instagram and, Twitter. With the progression of text messaging being the method of choice to communicate in this society, people have become so fixated on their devices that it is becoming a daily occurrence to incorporate it in their everyday routines, including driving.

Sending a text out while driving can have numerous effects, which includes distracted driving. Distracted driving is anything that can divert the driver’s main attention that is critical to driving safely such as texting, talking on the cell phone, eating, conversing with passengers, and so forth. Texting while driving is the worst of all driver distractions because it simultaneously uses cognitive, visual, and manual recognition. The U.S. Department of Transportation’s (DOT) National Highway Traffic Safety Administration (NHTSA) estimates that at least 3,000 deaths occur annually from driver distracted accidents (NHTSA 2012). Furthermore, studies have also shown that novice drivers (i.e. teenagers) tend to be at a higher risk at distracted driving than experienced drivers (i.e. adults). For the most part, texting is the worst distraction for anyone driving because both tasks require concentration which ultimately, the driving suffers due to the lack of attention from the driver’s ability to entirely focus on the road.

The effects of texting while driving also can cause extremely hazardous driving conditions that compromise the safety of the driver and their passengers along with other drivers sharing the roads and highways. Because texting requires at least one hand on the device and the driver’s eyes away from the road, the focus of the driver is not fully devoted to controlling the vehicle. This often leads to lane deviation that could possibly result in potentially dangerous situations. “Most drivers take their eyes off the road a minimum of five seconds to perform any task and if the driver is travelling at a speed of 55 mph, it is equivalent to covering the distance of an entire football field while blindfolded” (Harmon 10).

Moreover, the ability to stop quickly is also compromised in the event that the driver approaches nearby hazards. For example, a driver might inadvertently turn the wheel suddenly due to the fact that their focus was on their device. This could lead to missed opportunities to stay straight ahead on the road, swerve into another lane and/or vehicle, or possibly worse, into an innocent pedestrian walking along the road. With all things considered, texting is a dangerous behavior while driving that could impact not only their safety, but the safety of their passengers, other drivers and their passengers, bicyclists, and pedestrians.

Drivers are aware not to text while driving, but many still do despite the fact that it is illegal in many states. Currently, 45 states ban text messaging while driving (NCSL 2015). Of those states, 39 enforce laws with primary restrictions (an officer may pull a driver over for texting) and only 5 enforce it as a secondary offense (an officer can only ticket a driver committing a primary offense [e.g. speeding] first and not just for texting). A study performed by the University of Alabama at Birmingham School of Public Health looked into the effects of the different texting bans on vehicular fatalities from 48 states from 2000-2010 (Harman 10).

Their study found that states with primary enforced laws detected a 3% (an average of 19 deaths per year) reduction of fatalities in all age groups whereas; states that enforced secondary restrictions had no significant decline. The greatest impact shown was texting bans that affected young drivers (aged 15-21) with an 11% reduction in deaths. Given these points, hard evidence concludes that these states implementing and enforcing these texting bans are also saving the lives of many people.

As a result of texting-related accidents and fatalities increasing, new approaches and resources are being developed to eliminate this problem. One of the simplest methods a person can apply while driving—one that can possibly save a life—would be to turn their cell phone off. If an incoming message is that important, the driver can simply pull on the side of the road to read and/or send an outgoing message. Furthermore, several apps such as AT&T DriveMode and Live2Txt, are now available for users to download on their cell phones to prevent any incoming calls and text messages from appearing while inside of a moving vehicle. In addition, in March 2010 AT&T—now supported by Verizon, Sprint, T-Mobile, as well as more than 200 other organizations—has launched their “It Can Wait” campaign with the efforts to end texting while driving (Mlot 2013).

Their multi-million dollar awareness campaign includes a texting-while-driving simulator and an outreach program geared towards teens emphasizing the threat and dangers of texting behind the wheel. The DOT has also launched several distracted driving enforcement and advertising campaigns using the phrase “U Drive. U Text. U Pay.” to combat and crackdown on distracted driving. In brief, accidents related to texting while driving can easily be avoided if drivers heed the warnings of these awareness campaigns or by simply switching off their phones; which could perhaps save a life.

Taking everything into consideration, texting has enhanced the lives of many people with the ease and mobility to communicate with one another however; applying this method while driving is a dangerous behavior that is not only illegal in many states, but also has serious consequences if the driver is not focused behind the main priority of driving safely. Awareness campaigns have been designed to emphasize the extreme importance on how texting and driving can and has impacted many lives. Everyone can do their part to eliminate this problematic issue by simply taking one step and make the roads a little safer by easily turning off their phones while driving. Ultimately, drivers should be aware that there is no message or text that could be of greater importance than the life of another person.

Cause and Effects of Texting While Driving. (2016, Sep 23). Retrieved from https://studymoose.com/cause-and-effects-of-texting-while-driving-essay 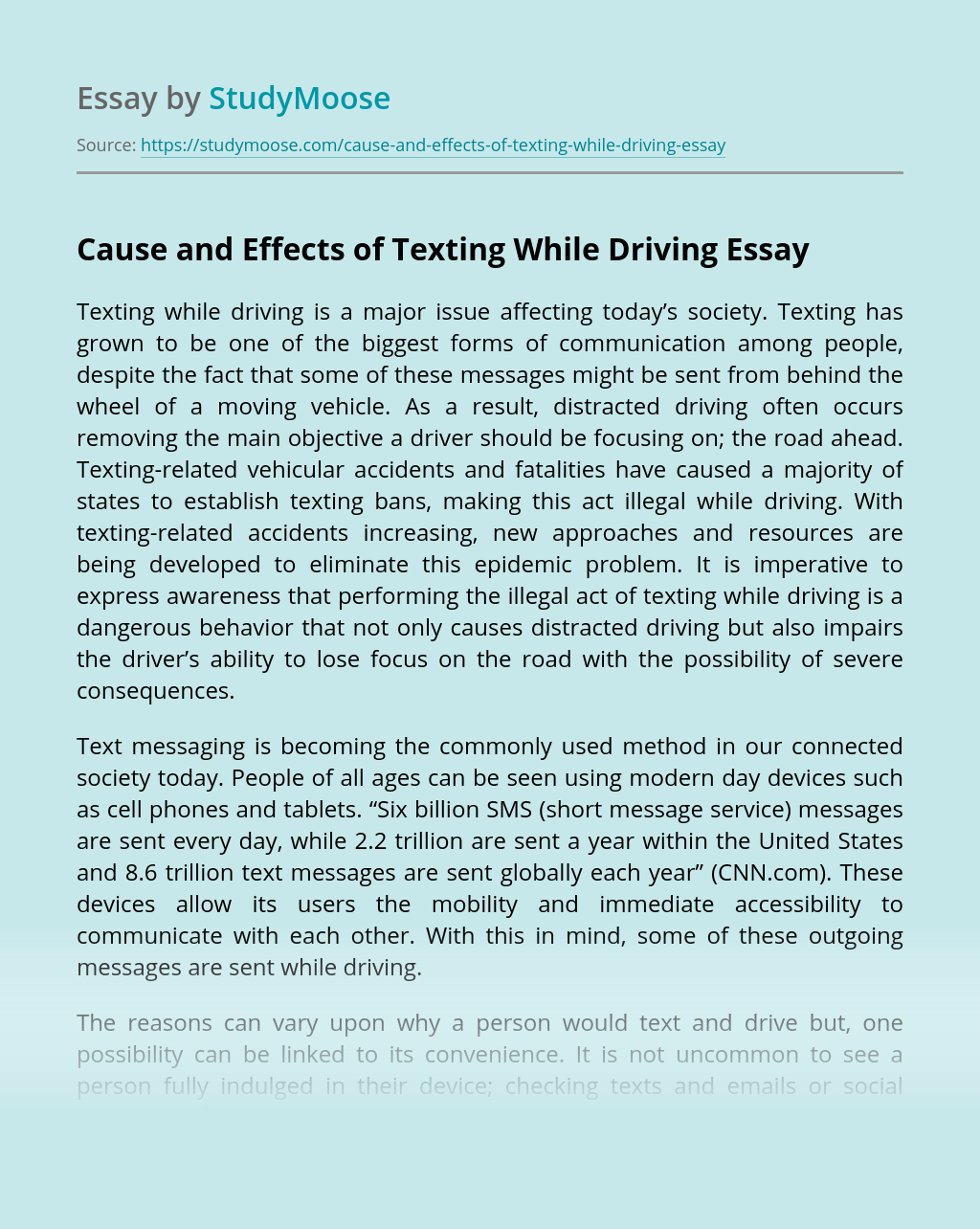 Texting while driving didn’t become a global problem overnight, however rapidly, one fatality after the next, resulted in alarming statistics that can not continue to go overlooked, and while some households are requesting for justice, that could never ever replace the liked ones they have actually lost. Others are requiring a solution to the growing...

Texting while driving: Issues it creates

Is it really that important to stay connected during every hour of the day? Many drivers today have such busy lives and never have time to complete the things they need to do in one day’s time. This leaves them to get things done while on the road. Checking texts and social media is a...

Get Essay
Why texting while and driving should be forbidden

How would you feel if someone that you held dear to your heart was severely injured or robbed of his or her life over a simple text message? What would be your choice of action if you received a text message while driving? Texting while driving is a dangerous habit that drivers have developed due...

The consequences of using a phone while driving

How Texting Affects Literacy in Teenagers

Thesis statement: In this paper, I will discuss how the frequent use of text messaging by teens today negatively affects literacy and I will offer suggestions that parents and teachers can implement and teach in order to raise reading, writing, and vocabulary skills. Since the technological phenomenon towards the end of the 20th century, text...

How Texting Affects Our Life

There is no denying that instant text messaging is very important in our live. Most of us could not even imagine our daily life without texting. This is the quickest and easiest method of communication, most popular among young people. Several years ago to suddenly organize with friends was quite difficult, especially when our friends...

Compare and Contrast Texting vs Calling

What would we do without cell phones? Have you ever tried to leave your phone at home just to see how much it’s really needed in your everyday life? I have and it’s a lot harder than you think. Technology has grown so much in the past ten years then you would ever know. From...