What Are the Dangers of Texting While Driving?

Don't use plagiarized sources. Get your custom essay on
“ What Are the Dangers of Texting While Driving? ”
Get custom paper
NEW! smart matching with writer

This is a problem and it should be illegal because it distracts drivers from the road. It also endangers others who are driving as well. When people are paying attention to the road and the road only they are being very observant of there surroundings. The danger of texting is the cause of thousands of people to die. Fifty states have put laws in to a place that prohibits texting while driving. This law is not being reinforced by the lawmakers as it should.

On thirty-five states have completely banned texting for all the people who drive. One in ten people is killed by distracted drivers. People who text while driving pay more attention to the activity that is going on within the phone and forget that they are driving. With this choice, it is a chance that the driver will lose control of the vehicle. This causes an accident or could risk the lives of others. People who text while driving are likely to crash or almost crash when it comes to choices like this.

Many states have tried to enforce some laws that will order drivers to stop texting. None of these laws will be effective if we as people do not see that texting and driving is a problem and you can not do it. You should always think about your life and other people’s lives. Texting while driving takes the driver’s eye off the road for an average of 3.6 seconds.

Texting and driving have become more popular than drinking and driving. Over 3,000 teens die each year in crashes caused by texting and driving, cellphones are involved in 2.6 million crashes each year. Using a cellphone while driving distracts the driver from the road and it puts their life and other lives in danger. People often drive while children are in the car. Children look up to people who are older than them and whatever you do they think that it is okay since you are doing it and it is not. Texting and driving while children are in the car is dangerous and you should not want them to think that texting while driving is okay. In today’s society technology has increased. People use their cellphones more than anything and that has become a major problem. People mostly use their devices throughout the day especially while driving. Texting and driving have become the leading cause of fatal accidents. Young drivers think that is okay to text while driving they have seen others do it, and maybe even their parents. Adults can help state reasons why texting and driving are dangerous. Texting and other cell-phone related to distracted driving is the cause of thousands of collisions each year. But studies examined by the specific cell phone reading and writing activities of drivers are limited. The objective of this study was to describe the frequency of cell-phone related to distracted driving behaviors.

A representative of the United States drivers was recruited in 2015 to complete the DistractedDriving Survey an 11 questionnaire examining cell phone reading and writing activities and at what speeds they occur. Higher scores reflect more distractions. Scores were analyzed by data and self-reported crash rates. 60% of responders reported a cell phone reading or activity within the 30 days, reading texts (48%), texting (33%) viewing maps (43%) reported. Distraction is associated with crash rates and occurs across all age groups, but is higher in younger drivers. Distracted driving is a concern among young drivers. According to the 2012 National Highway Traffic Safety Administration survey, the greatest distraction is drivers who are within the 16–19 and 20–24 age groups. One relatively new distraction is texting while driving. Texting and driving increase the number of time drivers spend looking away from the road, slows down reaction times, and increases the risk of an accident. To stop this behavior many distracted driving associations focus on the risks and danger of distracted driving however, the evidence says that youth and young adults continue to engage in texting and driving despite the risks. Previous studies have examined constructs from the theory of planned behavior as predictors of texting and driving. Understanding the full range of factors that may influence this behavior can inform the development of evidence-based public awareness campaigns and related interventions.

Purpose: The purpose of this paper was to examine predictors of texting and driving behavior among youth and young adults.

We examined constructs from the theory of planned behavior in addition to the role played by skills, experience with collisions due to texting and driving, descriptive norms and risk perceptions. Methods: An online survey was administered to 2001 Ontario youth and young adults examining potential predictors of TWD behavior. Regression models were used to examine which key variables were associated with TWD (both reading and sending behavior) among participants.

Results: Overall, regression models had good predictability for reading and sending behaviors. Perceived TWD driving skills and ‘ almost getting in a collision due to TWD’ were positively associated with TWD behavior in the past week (both reading and sending behaviors). Descriptive norms were positively associated with sending text messages while driving in the past week but were not significant for reading. In contrast, risk perceptions were positively associated with reading text messages in the past week but not sending. Discussion and conclusion: The results from this study highlight constructs that can be used to design interventions to deter young drivers from engaging in TWD. Interventions targeting perceived TWD driving skills and descriptive norms have the potential to be more effective than interventions emphasizing risk perceptions. Future studies are needed to better understand the relationships between these predictors and TWD behavior among this population.

What Are the Dangers of Texting While Driving?. (2020, Sep 10). Retrieved from https://studymoose.com/what-are-the-dangers-of-texting-while-driving-essay 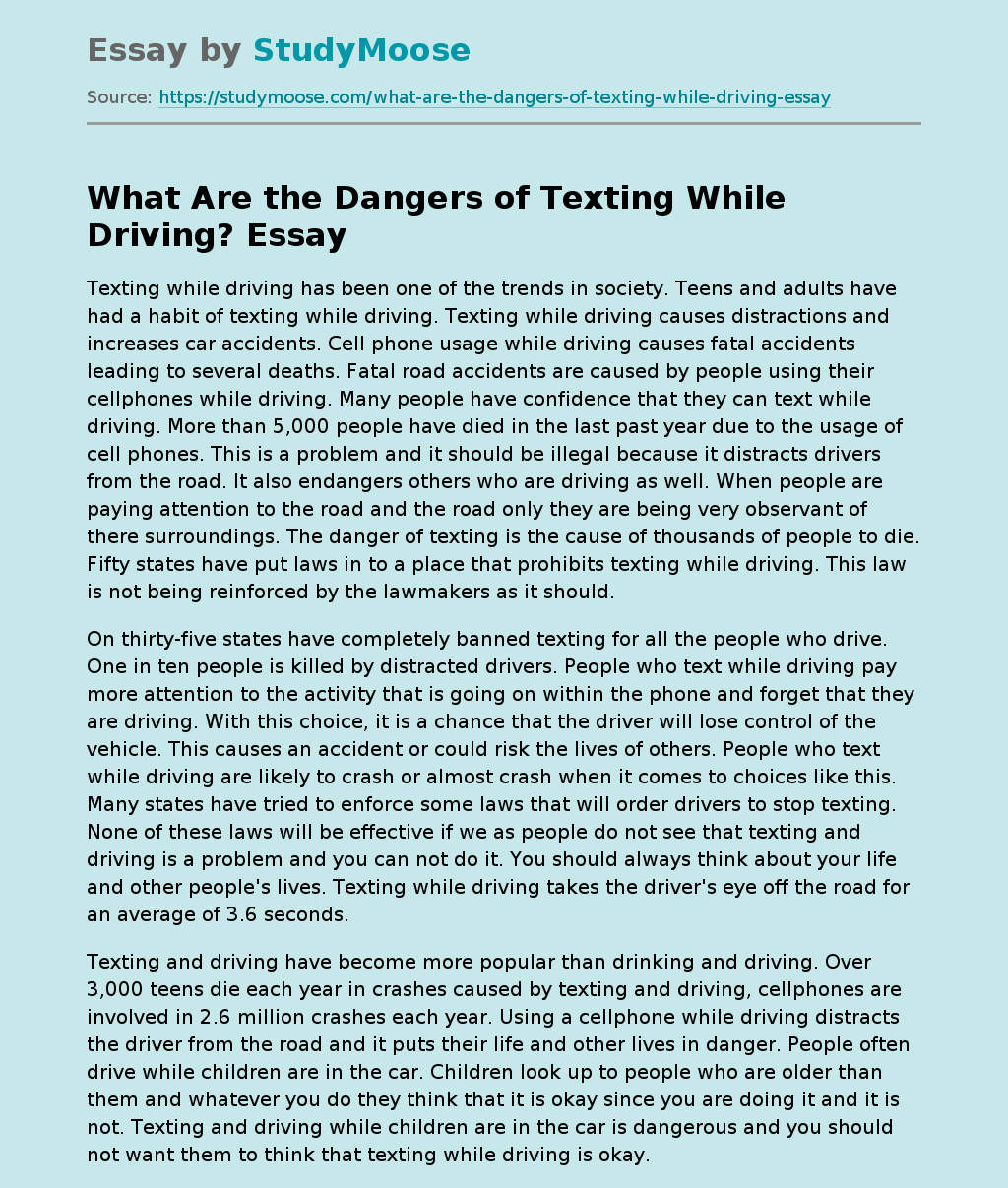