The short story "The Test"

The short stories “The Test”, by Angelica Gibbs, and “The Water Was Dark And It Went Forever Down”, by Tim Winton, explore interesting views on life. “The Test” deals with racism and how one black woman called Marian is failed on her driving test simply because the evaluator is racist. “The Water Was Dark and Went Forever Down” is not about racism, but challenges thoughts on living life in the same way as “The Test”. The author’s use challenging narratives to force the readers to think about what they would do when put in the same situation as the characters of the stories.

Don't use plagiarized sources. Get your custom essay on
“ The short story “The Test” ”
Get custom paper
NEW! smart matching with writer

As mentioned, “The Test” deals with racism as Marian is failed on her driving assessment for no reason other than the fact that the evaluator is racist. He pays no attention to Marians driving throughout the assessment and only fails her after Marian explodes with anger at the comments being thrown her way by the evaluator.

The evaluator then proceeds to put crosses on Marians marking sheet at random so she fails.

Marian has been put through this sort of experience before in exactly the same situation and could not handle the strains anymore. Angelica Gibbs writes this short story very well and makes the reader think strongly about how they would react if it were them in Marians position. Would they explode as she did, or could they handle it? It also makes readers think more closely about how they treat people of other nationalities. After reading “The Test” myself, I believe that I would do as Marian did.

Having people continuously mock you and tease you about your appearance or nationality would be very hard to handle, especially if you were missing out on important things (eg drivers license) because of it.

“The Water Was Dark And It Went Forever Down” also challenges readers’ thoughts on life. It is about a young girl on holidays who walks along the beach one day pondering her life at the moment and what her life would be like if her mother wasn’t so secretive and negative about a lot of things in their lives. Eg. Her father. Her love of swimming leads her to jump in the ocean and just swim to escape her thoughts and life back on the mainland.

Like Angelica Gibbs, Tim Winton wants readers to think about how they would handle it if they were in the girls position but also think about how they escape their problems and whether the “escaping” is really escaping or just putting them off temporarily. When I read this story, at first I didn’t understand what it was trying to tell me. But after reading it again, I really understood the challenge that Winton puts out. I put myself in the girls position and it became clear how much I rely on my mother and how hard it would be for this girl to go through many years of her life without having her mother do everything that most mothers do for their children. I also realised that you can’t escape your problems so running doesn’t help. The only way to get over them is to confront them and do something about them.

Both these authors challenge readers in similar ways, but they use completely different approaches. One uses the issue of racism, the other family life. Each made readers, including myself, ponder the same issues amongst themselves and their community. This helped me relate closer with the characters in the stories and get a better idea of what the story was about.

The short story "The Test". (2020, Jun 02). Retrieved from https://studymoose.com/short-story-test-new-essay 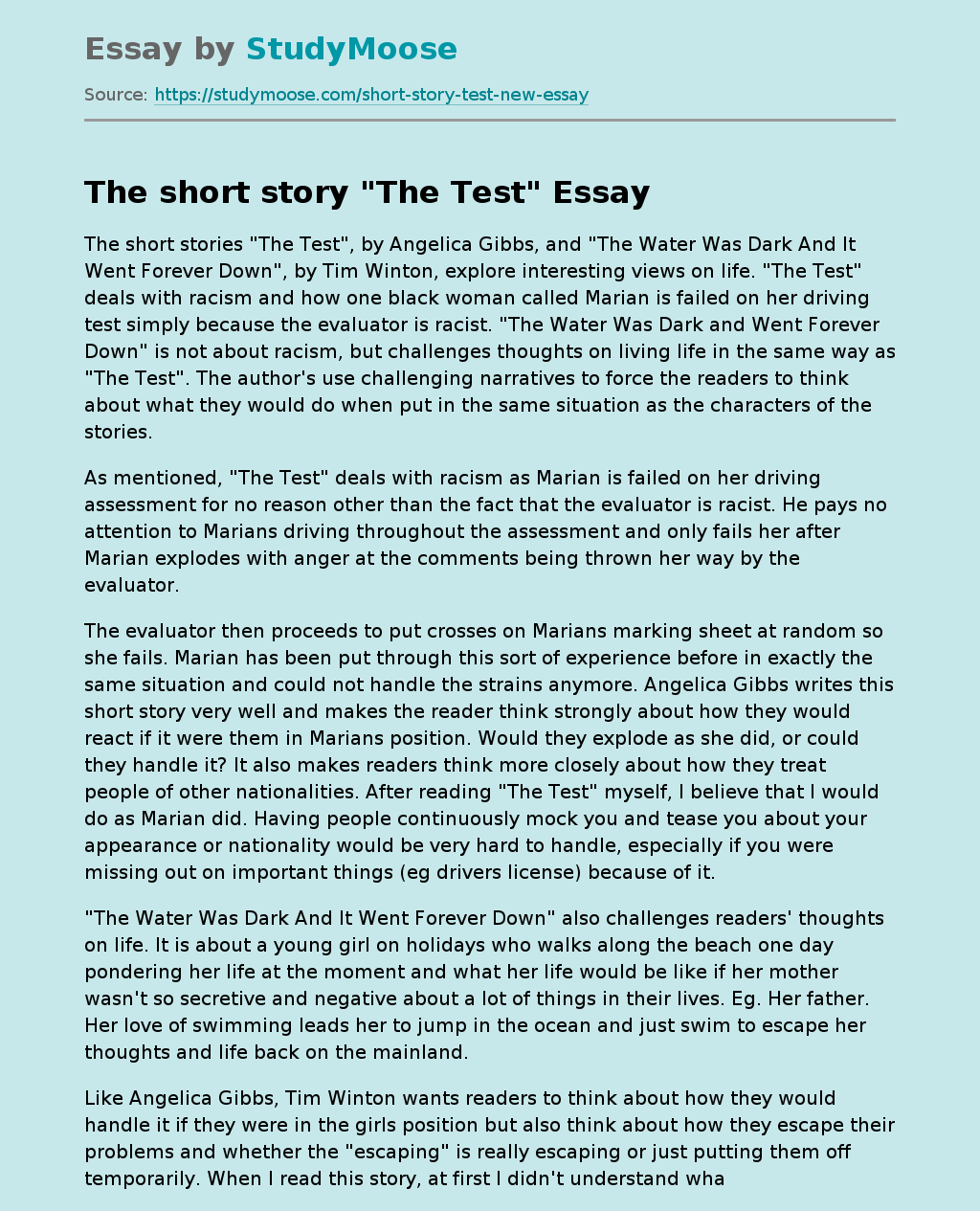