Gender Roles in Sports Ever since the beginning of the Olympics Games in Greece in 776 B. C. , women have always been put on the back burner when it comes to sports. To this day there are very noticeable differences in women’s sports compared the nature of men’s sports. Women and men alike experience their inequalities in sports. For example, of you were to ask a group of people what they would rather watch: women’s basketball or men’s basketball; generally speaking the majority of the group would favor watching men’s basketball.

Don't use plagiarized sources. Get your custom essay on
“ Gender Roles in Sports ”
Get custom paper
NEW! smart matching with writer

The reason they set up the Olympics Games like they did in 776 B.

C. , by not allowing to participate or even watch, is because the spectators wanted to only have the strongest, fastest, and most durable to play and even witness the games. The games were a tribute to the Greek God Zeus. The people of Greece wanted to show Zeus the best of the best in their society. People don’t want to watch women play sports just like they don’t want to watch dumb people play chess or jeopardy. It’s logic, not sexism. When you watch the WNBA the most exciting thing you see is a backwards layup or a no look pass.

When you watch the NBA, you see a man doing three hundred sixty degree slam dunks and all kinds of other cool tricks that naturally appease the like of their fans. The dynamic presence of men doing what women can’t inevitably draw’s a bigger crowd. Contact sports especially have a really addictive and enticing nature about them that women’s sports simply don’t have. All these aspects of contact driven sports are masculine, testosterone driven traits that are unlike the nature of women.

This is the main reason their participation is absent and men dominate the sports fan’s wants. Gender inequality in sports has always been a growing problem up until June 23, 1973 when President Nixon signed Title IX. This law was a huge victory for women in the fight for equality in sports. “The law prohibits sex discrimination in any education program or activity within any institution any type of Federal financial assistance,” according to Duffy. This was women’s first chance to gain legal equality in sports.

Women didn’t just get equality from this law, but they also got opportunity for equality. This law addressed the historical discrimination women have faced ever since the beginning of the Olympics first came about in 776 B. C. There is no women’s professional football team or any kind of football league for women. Men are not interested in watching women play the types of sports that men are always going to be better at. The only exception is women’s football where they play wearing lingerie; it’s sick how society works like that.

The NBA is in a lock out as this paper is being typed. You can see the progress on the news every day. If the WNBA were to be in a lockout, the chances of it being on the news every day is highly unlikely. There are in fact sports that women are becoming more popular in like golf, gymnastics, figure skating, volleyball, and tennis. These sports complement the shape of a woman’s body. Also, figure skating, volleyball, and gymnastics are sports the women are especially better at due to their elegant figures and different bone structure.

The stars of these sports are portrayed as sexy, curvy, graceful, and radiant. Men who are famous with sports like basketball, football, baseball, and soccer are known to be strong, dominant, and masculine. “The thought was that if women participated in strenuous activity that they would damage their reproductive organs, which would ultimately not fulfill an absurd belief that the primary role of women in society was to have children and care for the men,” heard from the thoughts of Murphy. Women in society in general are the face of modeling and sexy images.

Commercials, advertisements, and every day television programs have sexy women posing with whatever it is they are trying to sell. This works the same way with them in sports. Sports Illustrated Swimsuit Edition has a whole lot of sexy women posing in skimpy swimwear. That goes the same for the sports they’re involved in that are popular. For these reasons, women dominate those sports which lead to their popularity when it came to people watching them. There’s always the stereotype that women are lesbians or dikes for playing sports that require adequate physical strength and endurance.

For instance, bodybuilding has always been a man’s sport. Women are always thought to be feminine and when you see a woman who is at least twice your size; judgments go through the roof not only with the judges, but with the audience as well. In Jennifer Banas topic of Women Athletes in Male Dominated Sports, she speaks her mind when saying, “Now, the contestants should be judged on muscle tone of the body right. Wrong. In order to define which women has the best and most well defined body, the judges feel compelled to define “body” in relation to “women. Recalling a time there was a girl at my old high school that graduated and went on to join a volleyball team at a college. After her first visit home, she was utterly disappointed to find her peers had started a rumor about her that she was a lesbian and that’s why she joined the team in the first place. It broke her heart to get that type of support, or lack thereof, from the people she grew up with who fully knew she was never a lesbian. Football is another example of this. If a woman decides she wants to become a football player, she should not have to worry about what her peers are going to say or think about her.

She shouldn’t have to worry about being called those names like lesbian and dike if she wants to be a football player. When it comes to being in these competitions with lady football players, the judgments are a bit skewed and distorted due to the fact that men are typically associated with strong and large muscles. So when spectators have to look at a female figure, that has the typical aspects of a male’s figure, it can be a little confusing. The assumptions and discrimination still goes on to this day even if there is a law prohibiting it.

It has been an issue since sports were first celebrated on a large scale in Greece 776 B. C. Although society is slowly but surely progressing towards a more open-minded view when it comes to sports, there is always going to be a gap when it comes to overall crowd appeal. Men’s sports are more interesting to watch simply due to the fact that they are better, faster, stronger, and intense. It all boils down to the money, and men’s sports generate more money. For these reasons gender inequality will always be a persisting problem in sports. Work Citied Page Duffy, Felice M. (2000). Twenty-seven years post title ix. 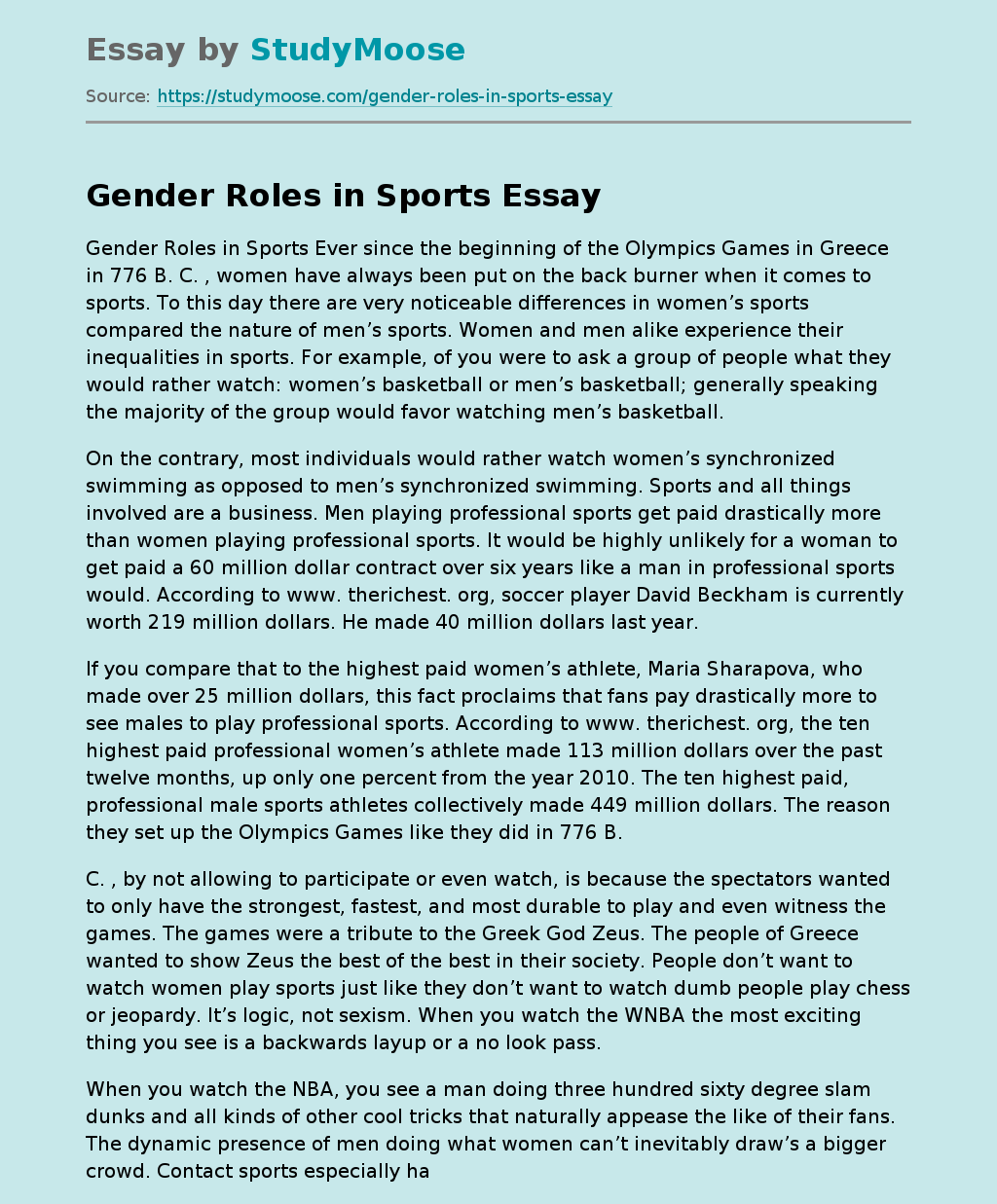