Describe and Explain Variations Between New and Old Social Movements

Bagguley argues that Old Social Movements are mainly influenced by class and economic factors. Many OSMs take the form of Trade Unions. For example, there are several teachers unions in the UK, such as NASUWT and NUT. Because of this the social base of OSMs is largely working or lower middle class.

Don't use plagiarized sources. Get your custom essay on
“ Describe and Explain Variations Between New and Old Social Movements ”
Get custom paper
NEW! smart matching with writer

In comparison to this, Hallsworth describes New Social Movements as groups which challenge the established political and cultural order in society. NSMs deal with issues that have arisen in western society since the 60s, such as feminism, environmentalism, gay rights and anti-racist groups. And as these issues effect people from all walks of life, New Social Movements attract people from all classes. In addition to this, NSMs often have global appeal as they transcend not only social class but race and nationality too.

For example, LGBT parades and protests happen across the world as the movement is one that can unite people globally.

A further difference is that Old Social Movements tend to be insider groups whilst NSMs are considered outsider. OSMs are viewed as expert and professional, often having links with those in powerful positions. For instance, Trade Unions sometimes have links to Labour politics, with TULO (The Trade Union & Labour Party Liaison Organisation) coordinating the activities of trade unions that affiliate with the Labour party.

This means that many Old Social Movements have the power to influence important decision and law makers.

On the other hand, outsider groups are those that have little to no access to decision makers, and these tend to be New Social Movements. These movements have little access to powerful people as they’re viewed as too extreme or go against the aims of those in power. One extreme example of an outsider group is the IRA. The organisation seeks a united Ireland but has been considered an illegitimate organisation by the British government due to its violent methods that are unacceptable in a democratic country. However, the status of groups can alter. For example, in the 70s many environmental NMS were considered outsider groups and yet today political parties often seek their advice.

Despite these differences, however, NSMs and OSMs do share some similarities. Both types of organisation aim to bring together and unite people with common goals and interests. In addition to this, the way in which they try to achieve their aims are often similar. Teachers Unions like NASUWT and NUT have staged several strikes over the last few years due to issues with teacher’s pensions, pay and working conditions. Their tactics are peaceful and civil and, with the exception of a few extreme cases, the same can be applied to New Social Movements.

In conclusion, therefore, differences between Social Movements include their social base, their ability to influence those in power and their global appeal. However, it can often be difficult to pinpoint exact differences between the two kinds due to shifts and changes in public and political opinion over time. It is clear, however, that the majority of both NSMs and OSMs have one main goal: to unite people and bring about change to help increase equality in society. 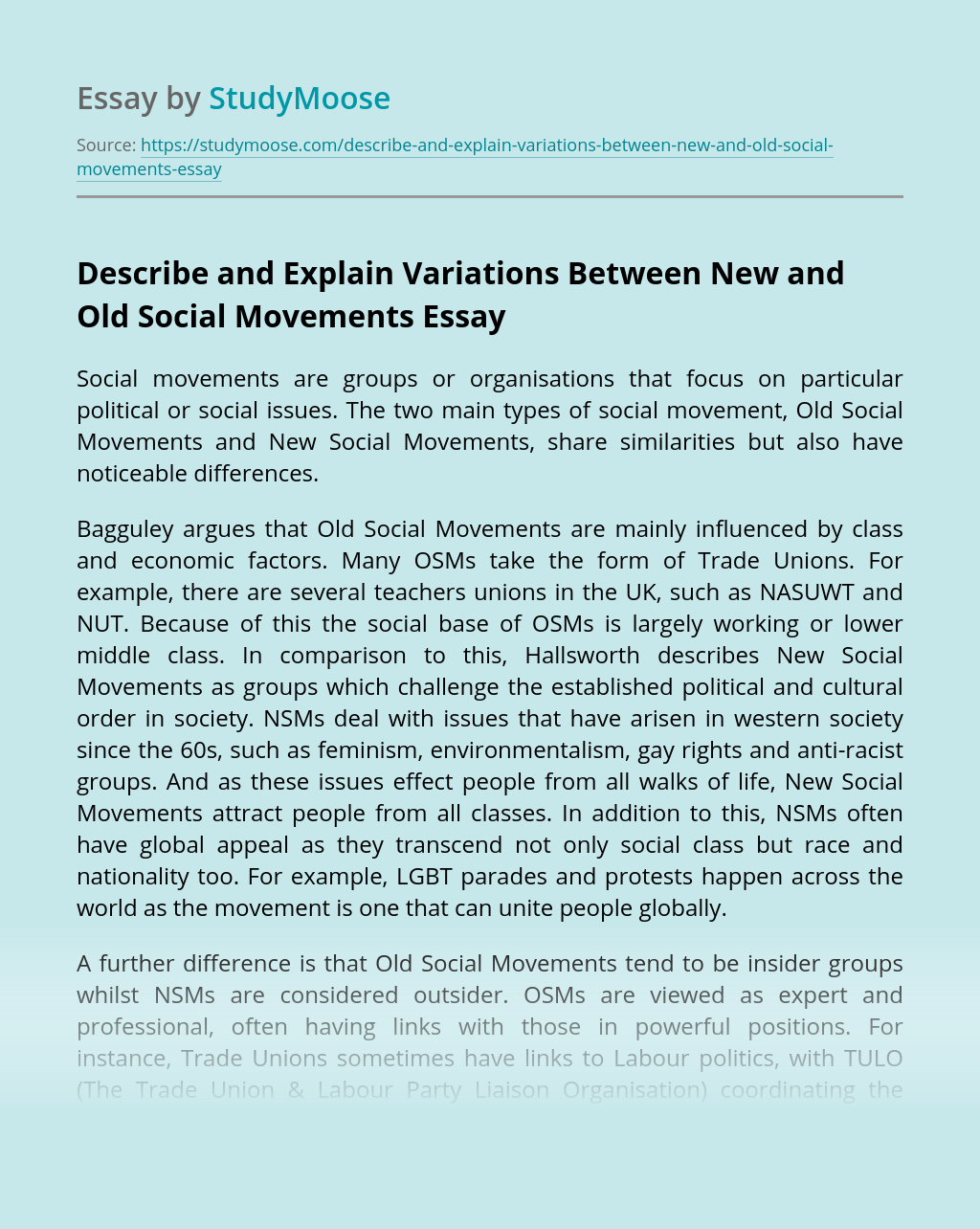