Turn in your highest-quality paper
Get a qualified writer to help you with
“ Transcendentalism and Romanticism ”
Get high-quality paper
NEW! AI matching with writer

According to them, fulfilling the search for knowledge came when one gained an awareness of beauty and truth, and communicated with nature to find union with the ? Over-Soul? , a term used by Emerson in place of God. When this occurred, one was cleansed of materialistic goals, and was left with a sense of self-reliance and purity. Leaders of this movement include Ralph Waldo Emerson, Margaret Fuller, Theodore Parker, Bronson Alcott, William Ellery Channing, and Henry David Thoreau.

These people were all transcendentalists.

Transcendentalists can be seen as a generation of well educated people who lived in the decades before the American Civil War. (Lewis, ? What is Transcendentalism?? ) Transcendentalists deliberately went about creating literature, essays, novels, philosophy, poetry, and other writing that was clearly different from anything from England, France, Germany, or any other European Nation. The concept of transcendentalism is clearly expressed in the essay “Nature”, by Ralph Waldo Emerson. His essay “Nature” tells of how one can gain insight and spiritual cleansing simply from experiencing nature.

Emerson tells of how “in the woods is perpetual youth” and “in the woods we return to reason and faith. ” These lines show the whole concept of transcendentalism. In the following lines, Emerson remarks: “Standing on the bare ground- my head bathed by the blithe air and uplifted into infinite space- all mean egotism vanishes. I become a transparent eyeball: I am nothing; I see all; the currents of the Universal Being circulate through me; I am part or parcel of God. “(Emerson, ? Nature? ).

These lines display the transcendentalist belief that purity and knowledge can be obtained from a union with and understanding of nature. Emerson also relates the concept of transcendentalism to human life in his essay, “Self-Reliance. ” In this essay, Emerson talks about another part of transcendentalism, the issue of “self-reliance. ” He sees mankind as somewhat of a coward and that people never express their true selves. Emerson claims that humans are afraid to fail and no matter what success may come to them, they will never be happy, they always want more. He expresses transcendentalist ideals by saying that a true person would be a non-conformist.

Emerson puts this belief into words in the following lines: “There is a time in every man? s education when he arrives at the conviction that envy is ignorance; that imitation is suicide; that he must take himself for better, for worse, as his portion, no kernel of nourishing corn can come to him but through his toil. ” These words pretty much sum up the idea of transcendentalism, that one must celebrate the individual in order to find himself one with the universe. Another significant contribution to the idea of transcendentalism was by the author Henry David Thoreau.

Thoreau lived in the same home as Emerson. His most honored and enjoyed work was the story, “Walden”. In “Walden”, Thoreau explains why he chose the woods: “I went to the woods because I wished to live deliberately, to front only the essential facts of life, and see if I could not learn what it had to teach, and not, when I came to die, discover that I had not lived. I did not wish to live what was not life, living is so dear; nor did I wish to practice resignation, unless it was quite necessary.

” Thoreau chose to live in seclusion because he believed solitude was the best companion in order to know one? s true self. In the essay, he felt that mankind was too caught up in material possessions. Thoreau gave transcendentalism three key ideas, individualism, knowledge of nature, and the disposal of material belongings. Transcendentalism was one of the most important movements of the 19th century. This movement allowed for one to understand the importance of learning more about oneself.

If a person could connect their individual soul with the universe, they could fulfill their potential in life. Romanticism is an artistic and intellectual movement that originated in the late 18th century and stressed strong emotion, imagination, freedom from classical correctness in art forms, and rebellion against social conventions. Romanticism also is an attitude or intellectual orientation that characterized many works of literature, painting, music, architecture, criticism, and historiography in Western civilization over a period from the late 18th to the mid 19th century.

Romanticism can be seen as a rejection of the precepts of order, calm, harmony, balance, idealization, and late 18th century Neoclassicism. (WebMuseum: Romanticism) It was also to some extent a reaction against the Enlightenment and against 18th century rationalism and physical materialism. Romanticism emphasized the individual, the subjective, the irrational, the imaginative, the personal, the spontaneous, the emotional, the visionary, and the transcendental.

Among the characteristic attitudes of Romanticism were the following: a deepened appreciation of the beauties of nature; a general exaltation of emotion over reason and of the senses over intellect; a turning in upon the self and a heightened examination of human personality and its moods and mental potentialities; a preoccupation with the genius, the hero, and the exceptional figure in general, and a focus on his passions and inner struggles; a new view of the artist as a supremely individual creator, whose creative spirit is more important than strict adherence to formal rules and traditional procedures;

An emphasis upon imagination as a gateway to transcendent experience and spiritual truth; an obsessive interest in folk culture, national and ethnic cultural origins, and the medieval era; and a predilection for the exotic, the remote, the mysterious, the weird, the occult, the monstrous, the diseased, and even the satanic. (WebMuseum: Romanticism).

Some of the authors of this movement include Jean Jacques Rousseau, Johann Wolfgang von Goethe, Johann Gottfried von Herder, and Justus Moser. Rousseau established the idea of the individual and championed the freedom of the human spirit. One of his most famous quotes were ? I felt before I thought?. Goethe, Herder, and Moser worked together on a group of essays entitled Von deutscher Art und Kunst. In this work the authors celebrated the romantic spirit as manifested in German Folk songs, Gothic architecture, and the plays of William Shakespeare.

Goethe wanted to imitate Shakespeare? s free style in hit Gotz von Berlichingen, a historical drama about a 16th century robber night. This play justified revolt against political authority. One of the great influential documents of romanticism was Goethe? s Sorrows of Young Werther. This work praises sentiment, even to the extent of justifying committing suicide as a result of love.

These were just some of the many works that characterized the ideals of Romanticism. Without the transcendental and romanticism movements American literature would not be what it is today. These movements have shaped the way today? s authors approach writing. Also these movements have allowed for one to expand his or her mind to new ideas and new ways of approaching life. 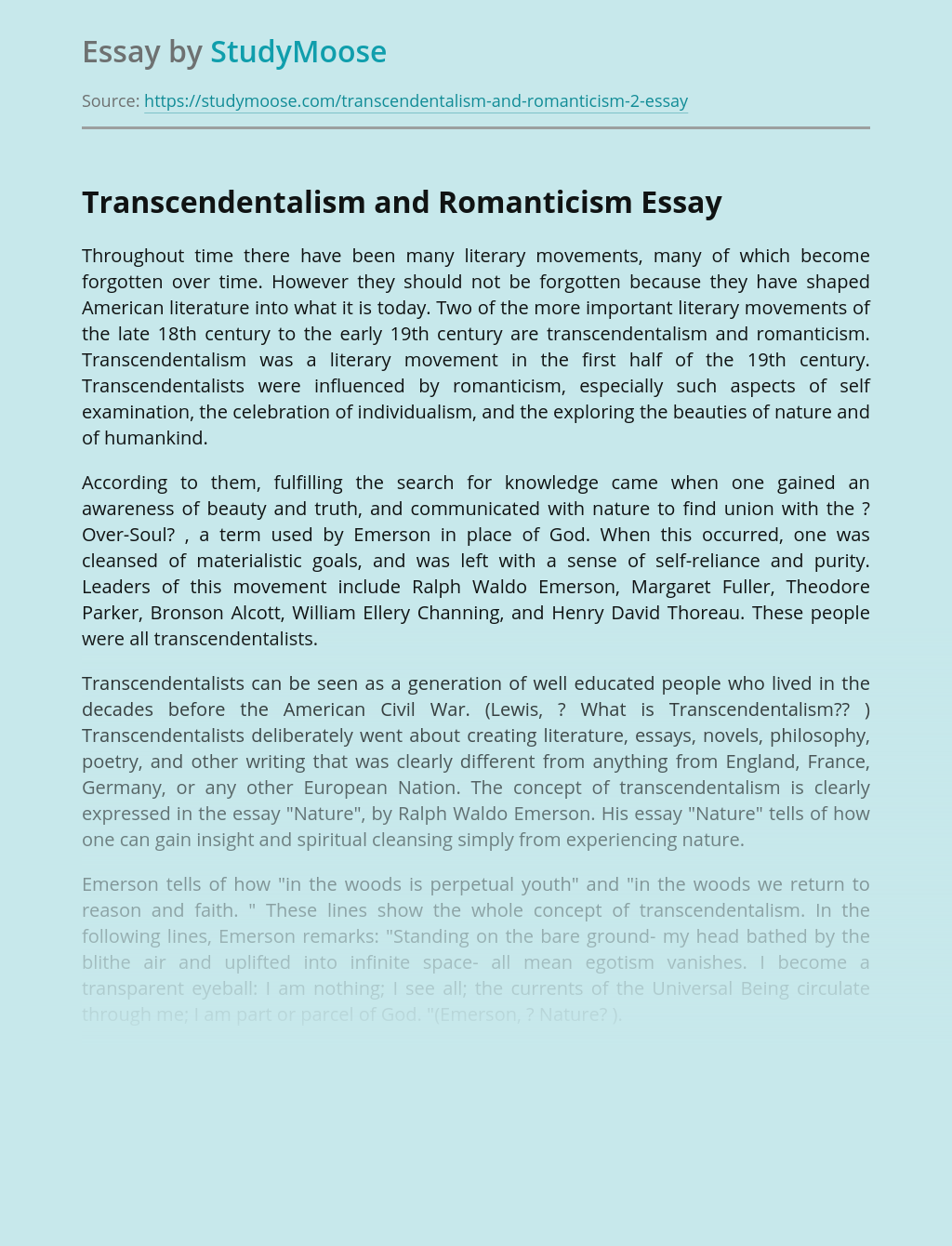 Turn in your highest-quality paper
Get a qualified writer to help you with
“ Transcendentalism and Romanticism ”
Get high-quality paper
Helping students since 2015
Stay Safe, Stay Original