The nineteenth century gave readers a plethora of literary genius. Perhaps the most recognized literary movement was Transcendentalism. This literary concept was based on a group of new ideas in religion, culture, and philosophy. Transcendentalism paved the way for many subgenres, it’s most significantly opposite; however was the emergence of Dark Romanticism. The Romantics had a tendency to value emotion and intuition over reason and logic. Many of the writers of the nineteenth century placed themselves into one or the other category.

Get a verified writer to help you with Transcendentalism vs, Dark Romanticism

In its most specific usage transcendentalism refers to a literary and philosophical movement that developed in America in the first half of the nineteenth century. It first arose among the liberal New England Congregationalists who departed from the orthodox Calvinists, whose approach to Christian life emphasizes the rule of God over all things. (in text citation) Transcendentalism also involved the rejection of the Puritan values that were once the basis of New England culture. American Transcendentalism began with the formation of the Transcendental Club in 1836, in Boston.

Ralph Waldo Emerson lead the group of literary minds including, Margaret Fuller, a feminist and social reformer, and Henry David Thoreau, a naturalist and author. Together they and their other members published The Dial, a short-lived but influential periodical. Emerson, the father of Transcendentalism, wrote some of the major works of the movement. Self- Reliance and Nature are two of his well known. In Nature, Emerson conveys to the reader the belief that each individual must develop a personal understanding with the universe, and that there is a relationship between man and nature.

Henry David Thoreau was also a major contributor to the Transcendentalist movement, in two of Thoreau’s most influential pieces, Walden, he writes of his strong beliefs of nature’s impact on man. In Resistance to Civil Government, Thoreau writes of his issues with organized government: “That government is best which governs least, That government is best which not governs at all” His libertarian views of government’s involvement in every day life lead to his arrest in 1846 for nonpayment of poll taxes. His refusal to pay was based on his beliefs that one should not support a government that supported such atrocities as slavery.

Walden was an account of Thoreau’s time spent living in a hut in Walden Pond near Concord, Massachusetts; he explores such values as self reliance, and the simplicity of nature. The Transcendental movement inspired authors like Nathaniel Hawthorne and Edgar Alan Poe and sparked another literary movement known as Dark Romanism. Unlike Transcendentalism the Dark Romantics believed that human nature is not necessarily good, that the darker side of humanity had been being ignored by the transcendentalists. The works of the Dark romantics is filled with tales of revenge, obsession, shame and madness.

The conflicts between good and evil set a gloomy, dark mood of the tales written by the Dark Romantics. Nathaniel Hawthorne wrote the Scarlet Letter, a story of shame and hypocrisy, his ancestor’s Puritan values and his lack of belief in their ways lead to the creation of this piece. His main character, Hester, is labeled an adulterer and is forced to wear a scarlet “A” that symbolizes her sin of adultery. While those who see her see a symbol of shame and guilt, Hester sees it as a symbol of strength and pride, and above all, a symbol of the town’s hypocrisy.

This romantic piece of literature also has gothic elements. Hawthorne’s use of imagery and dismal tones lend it to the genre of Dark Romanticism. Other works by Hawthorne, specifically, My Kinsman, Major Molineux, are filled with dark and light imagery, from the main character, Robin’s, meeting of the ferryman to his realization that his kinsman is not the respectable man he once believed he was, this story had dark undertones that go along way in conveying the strange and secretive ways of the townsfolk that Robin meets.

Edgar Alan Poe also writes in the Dark Romantic genre, he had a great dislike for the transcendentalists calling them, “Frogpondians”, after a pond on Boston Commons, he ridiculed their writings and his piece, Never Bet the Devil in You Head, was a clear attack on the movement. Poe, who is sometimes considered a gothic writer, uses ideas such as dementia and paranoia in his works. Supernatural behaviors of characters and personification grace the pages of many of his best tales.

Many of Poe’s tales are distinguished by the author’s unique grotesque inventiveness in addition to his plot construction. Such stories as The Pit and the Pendulum is a spine-tingling tale of cruelty and torture, while the Tell -Tale Heart, is a story a maniacal murderers overbearing guilt and shame, then actual confession of his crime. The dark romantic authors embraced the concept of weltschmerz, or world pain, a phrase coined by German author Jean Paul.

Get a verified writer to help you with Transcendentalism vs, Dark Romanticism 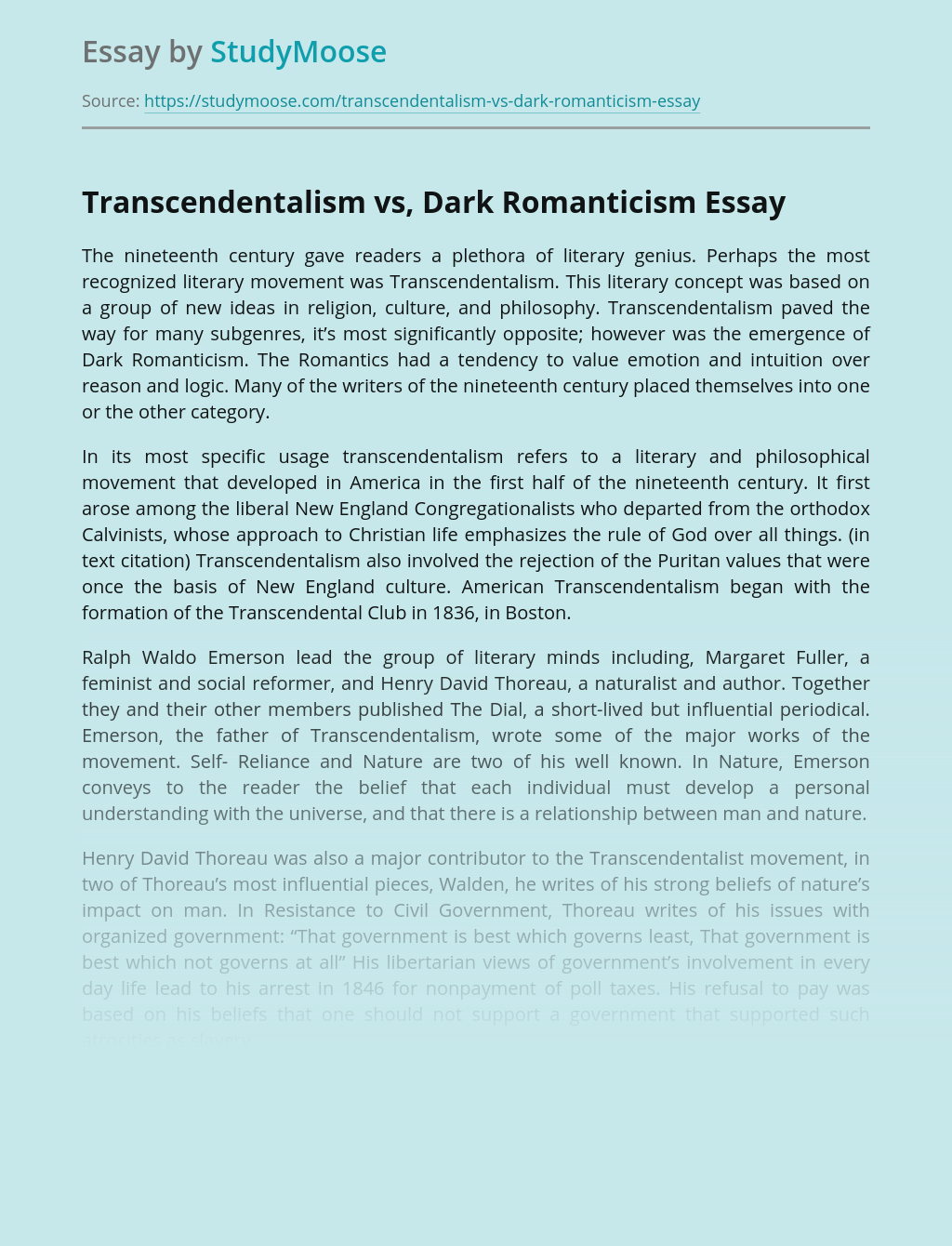 The nineteenth century gave readers a myriad of literary genius. Maybe the most acknowledged literary movement was Transcendentalism. This literary principle was based on a group of originalities in faith, culture, and approach. Transcendentalism led the way for lots of subgenres, it’s most significantly opposite; however was the introduction of Dark Romanticism. The Romantics tended...

The late 18th Century in American history was dominated by an era of emotional and individualistic values of oneself, and a powerful sense of limitless possibilities. This was the Romanticism Period. An incredible number of miraculous masterpieces were contrived during this period of enlightenment, including Nathaniel Hawthorne’s dramatically thematic and ambiguous short story, “Young Goodman...

The Romantic Era followed the Age of Reason. While the Age of Reason involved emphasis on science and rational thinking, Romanticism was the exact opposite. Romantics valued feeling and intuition over reason. They recognized the worth of the individual, and praised beauty, imagination, and innocence. Some of these writers were Margaret Fuller, Ralph Waldo Emerson,...

Anti-Transcendentalism in the Work of Edgar Allan Poe Life and death are concepts that are widely known by men and women of all cultures. Many pieces of literature are written about these topics since they are well known but not everyone understands the meaning of living and dying. Death seems to be the tougher of...

Transcendentalism, was a major belief of many people in America. Although it no longer remains as a belief in today’s society, in the eighteen hundreds it made quite an impression. Some of these people consisted of Henry David Thoreau and Ralph Waldo Emerson, two great American authors. Transcendentalists believed that everyone was one with nature,...