During the nineteen century in America, Dark Romanticism was very popular. Dark Romanticism is a literary subgenre that emerges from Transcendentalism. Transcendentalism believed that to discover truth people must see beyond the physical world, also believed that people can find God directly on nature. Dark romanticism explores the conflict between good and evil and the psychological effect of sin and guilt in the human mind. One of the famous Dark romantic writers is Washington Irving. He is well known for his short stories and his unrealistic characters and his detailed description of nature.

Turn in your highest-quality paper
Get a qualified writer to help you with
“ Dark Romanticism in “The Devil and Tom Walker” ”
Get high-quality paper
NEW! AI matching with writer

Irving develops the characteristic themes of dark romanticism through symbolism in “The Devil and Tom Walker”. Many Dark romantics writer thought that nature had a spiritual influence over people, as a mysterious being. One of the main themes of the Dark Romanticism is nature. Irving describes with detail the nature setting around the characters.

In this story Irving says “The swamp was thickly grown with great gloomy pines and hemlocks, some of them ninety feet high, which made it dark at noonday and a retreat for all the owls of the neighborhood”.

In this sentence he is describing the setting described as dark, decaying and mystifying. Another theme presented in this story is the presence of the devil. Irving gives the devil human qualities and describes him as a “great black man”, “neither Negro nor Indian”, with a “pair of great red eyes” and with an ax in his shoulder. The devil is said to have various names among the countries and he claims to have witness great battles and conflicts in America.

Dark Romantics used images of evil in form of vampires, devils, ghosts and other human-characterized figures. In this case Irving uses the devil as a symbol of evil. Dark Romantics presents human beings as susceptible to sin. The author presents different sins in this story for example, avarice.

This sin was present in Tom Walker and also in his wife. In the story it said that the “husband was continually prying about to detect her secret hoards” and there were conflicts about what “ought to have been common property”. This says that the woman hid things to her husband, in order to save it from herself. Dark Romantics explore the conflict between good and evil. In this case the devil wanted to make an agreement with Walker. At first Walker refused because he knew that when devil granted favors, there was one condition: he had to be at his service. The wanted him to become a slave trader, but he refused his proposal because he was against slavery. He instead became a usurer.

When Tom Walker committed sins, he went to church to feel better about it. These visits to church are a symbol used to present guilt. He tried to focus in reading the Bible, but he kept censuring his neighbors and scamming his clients. He thought that every sin his neighbors committed became a credit in his own sins. Also, Walker tried to hide his guilt in his ostentation by building a great and incomplete house, just as Captain Kidd hid his treasure between the big trees in the forest. Washington Irving uses many symbols in this story to present the themes of Dark Romanticism. The forest is a symbol of the nature, and the devil is representative of the evil influence over the human being. Walker’s house represents a place to hide guilt and Walker’s wife is a symbol of greed. “The Devil and Tom Walker” describes very well the themes of Dark Romanticism.

Dark Romanticism in “The Devil and Tom Walker”. (2017, Jan 08). Retrieved from https://studymoose.com/dark-romanticism-in-the-devil-and-tom-walker-essay 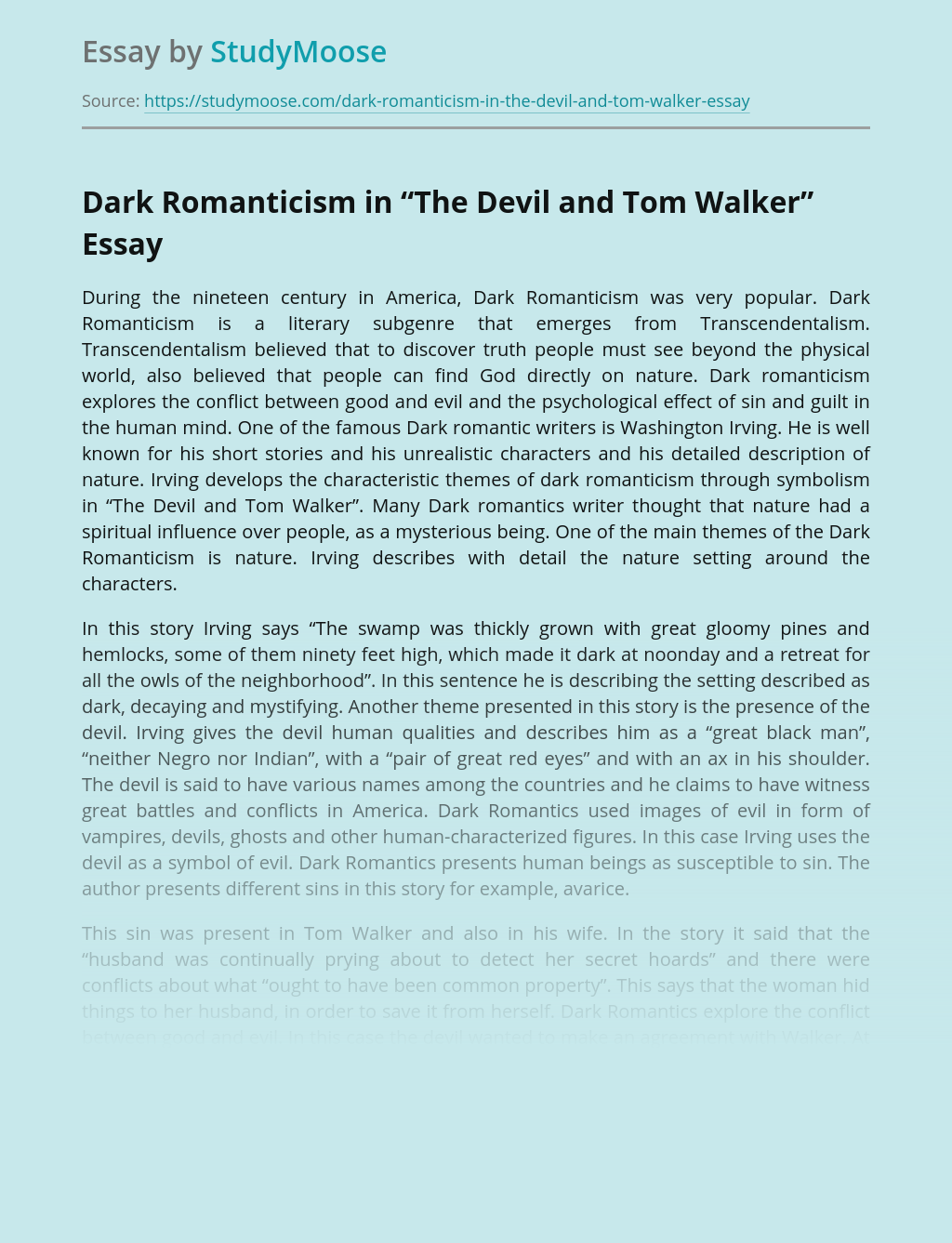 Turn in your highest-quality paper
Get a qualified writer to help you with
“ Dark Romanticism in “The Devil and Tom Walker” ”
Get high-quality paper
Helping students since 2015
Stay Safe, Stay Original