"The Devil And Tom Walker" and Romanticism

The Romantic movement, often known as Romanticism, was a literary, intellectual, and artistic movement starting in the late 1700’s into the 19th century. It originated in and traveled through Europe, inspiring its writers. Literary works during this era emphasized the reader’s imagination and emotion. They also had interests in nature and strive to be different from the standards that have been set by previous works. Romantic pieces almost become unrealistic with its fantasy or imagery. “The Devil and Tom Walker” by Washington Irving is a good example of the Romantic movement.

This short story uses imagery and symbolism including elements of nature, it has the common Romantic theme of challenging the character about their past and their inner feelings, and the emotions of the other characters are heightened.

“The Devil and Tom Walker” uses a lot of symbols and is very descriptive in the scenes. The black man that is mentioned several times in the story represents the devil and the evil of the “userers.

” The different trees that the black man points out during his conversation with Tom represent the different souls of people. Also, the swamp is a symbol for Hell; it is a place of evil and no one wants to go there. That is where the devil, the black man, lives. Nature is a big element in this short story.

The theme of changing your past and exploring your inner feelings was used in a lot of Romantic literary works. “The Devil and Tom Walker” was written during a time and setting when Puritans should devote their lives to God.

Tom decides to sell his soul to the devil and go against his beliefs and influences. When he heard about the buried treasure, he tries to stay strong but falls prey to his greed for money and riches. His marriage to his wife was not going well and both of them secretly wanted a different reality; this and his greed made his focus change to personal gain.

The emotions run high throughout the story. Tom’s wife, especially, has an active imagination. She wants everything that she doesn’t have and will do
whatever she can to get the object of her jealousy. When Tom had declined the black man’s deal the first time, his wife had already made up her mind that she would claim the riches. Tom assumes she had died when he found her apron with her heart and liver. His life becomes one of a money lender and eventually becomes a devout church-going man. After all that sadness and regret, the devil finally comes to take Tom’s soul and he rides off into the swamp.

I believe “The Devil and Tom Walker” by Washinton Irving is a good example of the Romantic literary movement. The characters are almost in their own fantasy world and there is imagery throughout this story. It is very similar to other pieces of literature written during this era. The characters are connected to their emotions, their inner feelings come to light, and there are a lot of examples of nature and symbols. These reasons all support the fact that this is a Romantic piece of writing.

"The Devil And Tom Walker" and Romanticism. (2016, Apr 19). Retrieved from http://studymoose.com/the-devil-and-tom-walker-and-romanticism-essay 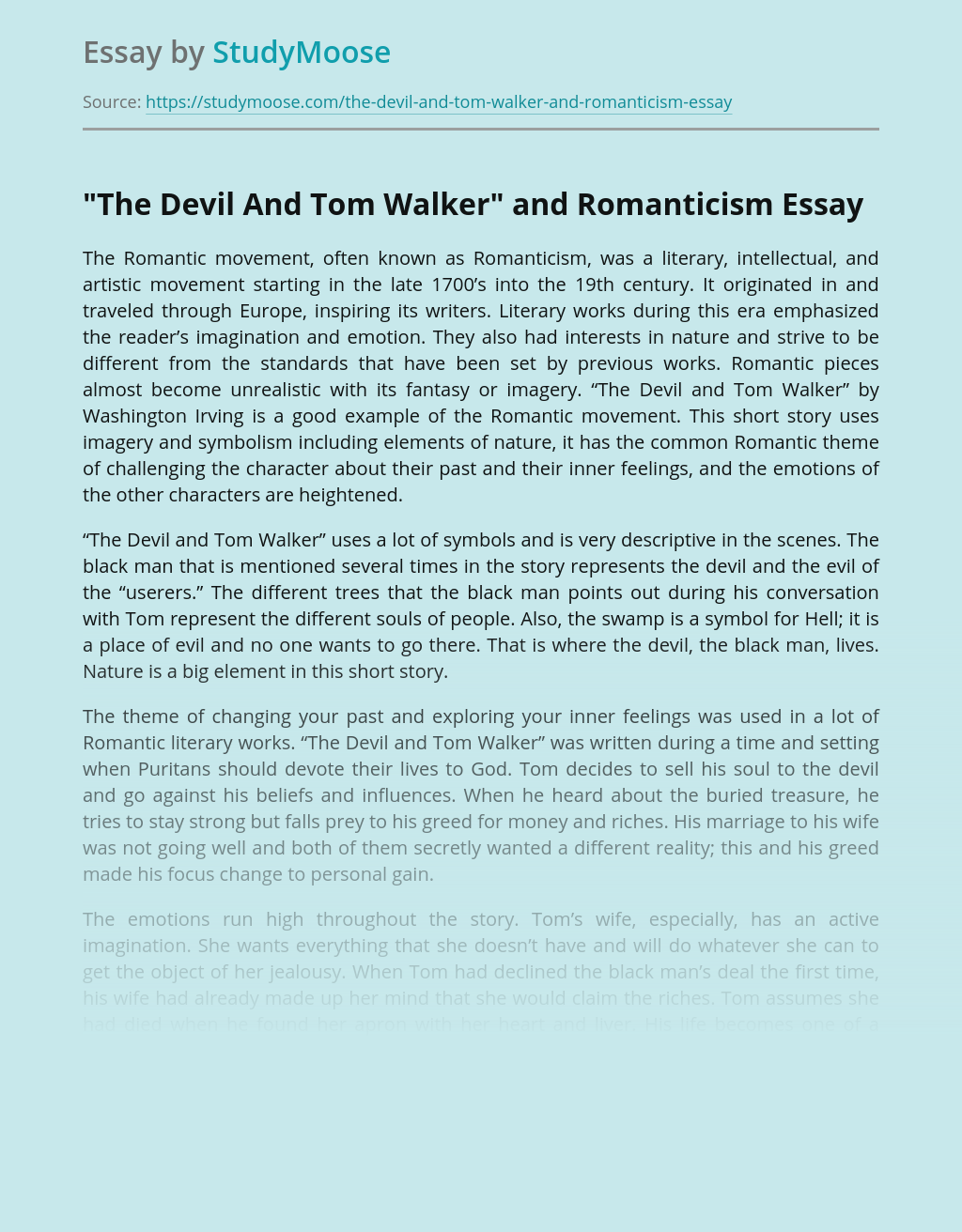 Don’t waste time
Get a verified writer to help you with “The Devil And Tom Walker” and Romanticism
Hire verified writer
$35.80 for a 2-page paper
Stay Safe, Stay Original