Romanticism in Art, Music and Literature

The romantic period in music extended from about 1820 to 1900. Among the most significant musicians were Franz Schubert, Robert Schumann, Clara Wieck Schumann, Frederic Chopin, Franz Liszt, Felix Mendelssohn, Hector Berlioz, Peter Ilyich Tchaikovsky, Antonin Dvorak, Johannes Brahms, Giuseppe Verdi, Giacomo Puccini, Richard Wagner and Gustav Mahler. The length of this list – and some important composers have been omitted from it – testifies to the richness and variety of romantic music and to its continuing impact on today’s concert and operatic repertoire.

Composers of the romantic period continued to use the musical forms of the preceding classical era. The emotional intensity associated with romanticism was already present in the work of Mozart and particularly in that of Beethoven, who greatly influenced composers after him. The romantic preference for expressive, songlike melody also grew out of the classical style.

Nonetheless, there are many differences between romantic and classical music. Romantic works tend to have greater ranges of tone colour, dynamics and pitch. Also, the romantic harmonic vocabulary is broader, with more emphasis on colourful, unstable chords.

Romantic music is linked more closely to the other arts, particularly to literature. New forms developed, and in all forms there was greater tension and less emphasis on balance and resolution. But romantic music is so diverse that generalizations are apt to mislead. Some romantic composers, such as Mendelssohn and Brahms, created works that were deeply rooted in
classical tradition; other composers, such as Berlioz, Liszt and Wagner, were more revolutionary.

Art forms, including music, exhibited extreme interest in subjects related to nature, death, the fantastic, the macabre, and the diabolical.

Unprecedented emphasis was placed on self-expression and the development of a uniquely personal musical style or voice. Music explored a universe of feeling that included flamboyance and intimacy, unpredictability and melancholy, rapture and longing, the mysterious and the remote. Some composers wrote music evoking a specific national identity (“nationalism”) or exotic location (“exoticism”).

Romantic music exhibits a wide range of expressive tone colour and sensuous sound The addition of new instruments and the increased size of the orchestra led to new and varied timbres. Woodwind, brass and percussion instruments played prominent roles in orchestral and operatic works. Composers experimented with timbre through unusual combinations of instruments or by having instruments play in unusual ways.

Melodies are often long, complex and highly expressive.
Recurring melodies and thematic transformation unify longer works. Prominent use of chromatic harmonies that are rich, colourful and complex. Dissonanceis used more freely; resolutions are often delayed to create feelings of yearning, tension and mystery. A wide range of keys and frequent modulations sometimes obscure the sense of an overall tonic or home key.

Texture is generally homophonic, but fluctuations of texture may occur to provide contrasts. A piece may shift gradually or suddenly from one texture to another.

Forms are rooted in the classical tradition, but now are more expansive and treated freely. New forms and genres were developed, such as the symphonic poem and the art song. Symphonies are typically longer than those of the classical era. Less emphasis is placed on balance, proportion and resolution of tension than in the classical era. Works can be very brief (e.g. Chopin’s Minute Waltz) or long an monumental (e.g. Wagner’s four-evening opera cycle Der Ring des Nibelungen).

One of the most distinctive forms in romantic music is the art song, a composition for solo voice and piano. Here, the accompaniment is an integral part of the composer’s concept and it serves as an interpretive partner to the voice. Although they are now performed in concert halls, romantic songs were written to be sung and enjoyed at home.

Poetry and music are intimately fused in the art song. It is no accident that the form flowered with an emergence of a rich body of romantic poetry in the early nineteenth century. Many of the finest art song composers – Schubert, Schumann and Brahms, for example – were German or Austrian and set poems in their native language.

Yearning – inspired by a lost love, nature, a legend, or other times and places – haunted the imagination of romantic poets. Thus art songs are filled with despair of unrequited love; the beauty of flowers, trees and brooks; and the supernatural happenings of folktales. There are also songs of joy, wit and humour; but by large, romantic song was a reaching out of the soul.

Some composers would interpret a poem. Translating its mood, atmosphere and imagery into music. They created a vocal melody that was musically satisfying and perfectly moulded to the text. Important words were emphasized by stressed tones or melodic climaxes.

The voice shares the interpretive task with the piano. Emotions and images in the text take on an added dimension from the keyboard commentary. Arpeggios in the piano might suggest the splashing of oars or the motion of a mill wheel. Chords in a low register might depict darkness or a lover’s torment. The mood is often set by a brief piano introduction and summed up at the end by a piano section called a postlude.

When a poem has several stanzas, the musical setting must accommodate their total emotional impact. Composers can use strophic form, repeating the same music for each stanza of the poem. Strophic form makes a song easy to remember and is used in almost all folk songs. Composers may also use through-composed form, writing new music for each stanza. Through-composed form allows music to reflect a poem’s changing moods.

Franz Schubert (1797 – 1828) was an Austrian composer. In a short lifespan of less than 32 years, Schubert was a prolific composer, writing some 600 songs, ten symphonies, liturgical music, operas, incidental music and a large body of chamber and solo piano music. Appreciation of his music while he was alive was limited to a relatively small circle of admirers in Vienna, but interest in his work increased significantly in the decades immediately after his death. Composers Felix Mendelssohn, Robert Schumann, Franz Liszt and Johannes Brahms, discovered and championed his works through the remainder of the century. Today, Schubert is ranked among the greatest composers of the early Romantic era and, as such, is one of the most frequently performed composers of the early nineteenth century.

Johann Wolfgang von Goethe (1749 – 1832) was a German writer and politician. His body of work includes epic and lyric poetry written in a variety of metres and styles; prose and verse dramas; memoirs; an autobiography; literary and aesthetic criticism; treatises on botany, anatomy, and colour; and four novels. In addition, numerous literary and scientific fragments, more than 10,000 letters, and nearly 3,000 drawings by him exist.

Schubert’s art song Erlkönig is one of the earliest and finest examples of musical romanticism. It is a musical setting of a narrative ballad of the supernatural by Goethe. Goethe’s poem tells of a father riding on horseback though a storm with his sick child in his arms. The delirious boy has visions of the legendary Erlking, the king of the elves, who symbolizes death.

Schubert uses a through-composed setting to capture the mounting excitement of the poem. The piano part, with its rapid octaves and menacing bass motives, conveys the tension of the wild ride.

The piano’s relentless triplet rhythm unifies the episodes of the song and suggests the horse’s gallop. By imaginatively varying the music, Schubert makes one singer sound like several characters in a miniature drama.

Who rides there so late through the night dark and drear?
The father it is, with his infant so dear;
He holdeth the boy tightly clasp’d in his arm,
He holdeth him safely, he keepeth him warm.

“My son, wherefore seek’st thou thy face thus to hide?”
“Look, father, the Alder King is close by our side!
Dost see not the Alder King, with crown and with train?”
“My son, ’tis the mist rising over the plain.”

“Oh, come, thou dear infant! oh come thou with me!
For many a game I will play there with thee;
On my beach, lovely flowers their blossoms unfold,
My mother shall grace thee with garments of gold.”

“My father, my father, and dost thou not hear
The words that the Alder King now breathes in mine ear?”
“Be calm, dearest child, thy fancy deceives;
the wind is sighing through withering leaves.”

“Wilt go, then, dear infant, wilt go with me there?
My daughters shall tend thee with sisterly care
My daughters by night on the dance floor you lead,
They’ll cradle and rock thee, and sing thee to sleep.”

“My father, my father, and dost thou not see,
How the Alder King is showing his daughters to me?”
“My darling, my darling, I see it aright,
‘Tis the aged grey willows deceiving thy sight.”

“I love thee, I’m charm’d by thy beauty, dear boy!
And if thou aren’t willing, then force I’ll employ.”
“My father, my father, he seizes me fast,
For sorely the Alder King has hurt me at last.”

The father now gallops, with terror half wild,
He holds in his arms the shuddering child;
He reaches his farmstead with toil and dread, –
The child in his arms lies motionless, dead.

Romanticism in Art, Music and Literature. (2016, Mar 01). Retrieved from http://studymoose.com/romanticism-in-art-music-and-literature-essay 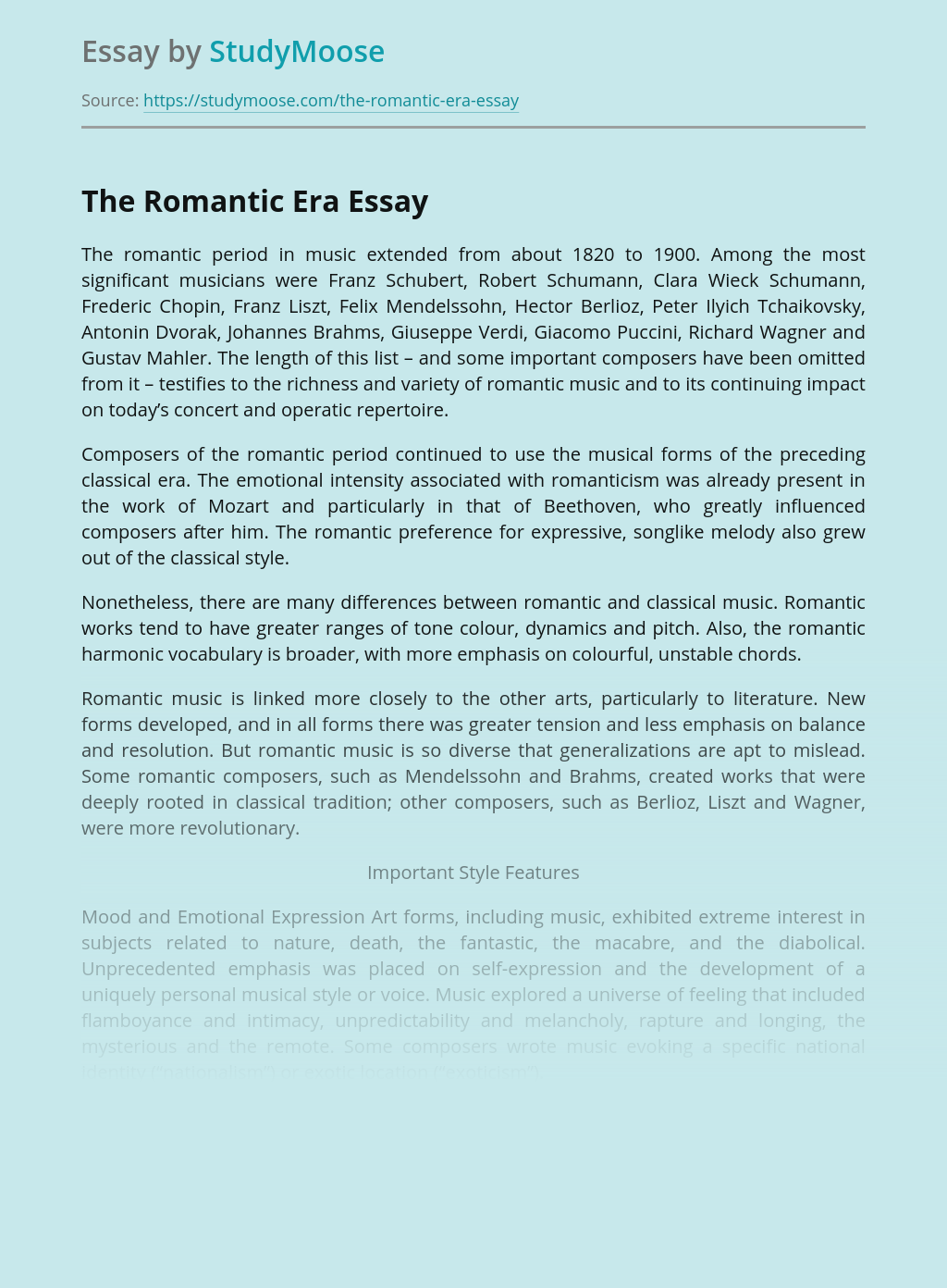 Don’t waste time
Get a verified expert to help you with Romanticism in Art, Music and Literature
Hire verified expert
$35.80 for a 2-page paper
Stay Safe, Stay Original