Romanticism, also referred to as the Romantic Era, began towards the end of the 18th century. This particular period in time involves an intellectual movement that greatly impacted the visual art, music, and literature that was produced during these years. With the concept of enlightenment being so popular in Western society, Europe and America rebelled against scientific approaches with romanticism. Romanticism is characterized by deep thought, emotion, and an outward expression of the two—both, of which, can be observed in the artistic, musical, and literary works that romanticists produced.

Don't use plagiarized sources. Get your custom essay on
“ The Romantic Era: Art, Music, and Literature ”
Get custom paper
NEW! smart matching with writer

During the romantic period, visual artists all had the goal of reflectin their own feelings within their work. With so much importance placed upon individual expression, the art from the romantic era varies widely according to the artist who created it (Spielvogel 659). They believed that all art should be a sort of mirror image in regards to the inner feelings of that particular artist. Art, therefore, was judged according to the level of intellect and emotional depth that it possessed, along with how effective a piece was in evoking feelings from those who viewed it.

Spielvogel writes that “…Romantic artists deliberately rejected the principles of Classicism. Beauty was not a timeless thing; its expression depended on one’s culture and one’s age. The Romantics abandoned classical restraint for warmth, emotion, and movement” (659). While the previous artwork made by classic artists involved restraint, artists during the romantic period valued the open and unabashed expression of feelings. Consider the work of Caspar David Friedrich, an artist from Germany.

For the majority of his life, he had a great interest in nature, God, and how the two entities were related to each other. Most of his paintings are of landscapes and contain themes of nature, such as his painting called Man and Woman Gazing at the Moon. In his landscape paintings, “His portrayal of mountains shrouded in the mist, gnarled trees bathed in moonlight, and the stark ruins of monasteries surrounded by withered trees all conveyed a feeling of mystery and mysticism. For Friedrich, nature was a manifestation of divine life…” (Spielvogel 659).

This shows how, unlike classic art, romantic art typically contained some sort of message behind it. There was meaning in the paintings of nature that Friedrich created, which served to express what he was feeling. Like the art from the romantic period, the music that was composed during this time also reflected the composer’s thoughts and feelings. One of the most famous composers of the romantic era was Beethoven. With nine symphonies and countless other works, his pieces evoked every possible emotion from the audience and accurately depicted every area of his own personality and character.

Beethoven’s music was not like previous compositions that focused on practicality, ornamentation, and generic topics. Instead, there was a certain depth in his songs and a very moody element that was associated with Beethoven alone—that is, he was so effective at composing romantic pieces, that each of his songs possessed a certain Beethoven signature. This is a testament of how personal each composition was, and what an important characteristic personal expression was in romanticism.

In terms of the technical aspects behind romantic music, this style of composition broke out from the strict guidelines of the Baroque and Classical eras. Bernstein writes, “From Beethoven in 1800 to Mahler in 1900, the whole nineteenth century is one long record of the battle to free those poor non-F tones from their legal tyrannies. In musical terms we say that music became more and more chromatic; that is, the smaller intervals between the notes of a diatonic scale” (122).

This refers to the normal scale on a keyboard, consisting of eight whole step notes. A chromatic scale involves all of the notes on a keyboard; and by making use of more notes other than those within more classical styles of music, composers were able to create more effects and depth in this music. The addition of chromatics led to what is known as “musical shading”—a term that refers to a song’s ability to be more complex and depict emotion and movement (Bernstein 122).

The literature that was written during the romantic period, like the art and music, was also characterized by a great amount of thought and feeling. In fiction novels, such as those by the Bronte sisters, it was not uncommon for females to be timid in nature and be shown as constantly weeping. It was this open display of intense emotion, after all, that is most closely associated with romanticism. Not all romantic literature, however, consisted of romance novels and other fictional works. There were also many serious intellectual pieces that were written.

The romantic era essentially “…empowered literature to express philosophical problems and political paradoxes which these discourses increasingly found themselves to be incapable of expressing on their own terms” (Swift 1). Unlike the literary pattern of the Enlightenment, writers were encouraged to voice their opinions on a more philosophical level rather than basing their writing on concrete facts and science. Rather than discussing the economics of a certain political agenda, for example, a romantic writer would be more likely to discuss the impact that the agenda would have on a more emotional level.

Romanticism led writers to question and ponder various aspects of the world and society, allowing them to explore different facets of thought rather than focusing only on what could be scientifically proven. It is clear that emotion had virtually no boundaries during the romantic movement. When it came to art, music, and literature, expression and creativity were very prominent. Romanticism allowed for more dimension and meaning behind various areas of the artistic world. These works proved that emotion and philosophy could be considered a form of art, which is why these elements are evident in all art forms produced during this time. 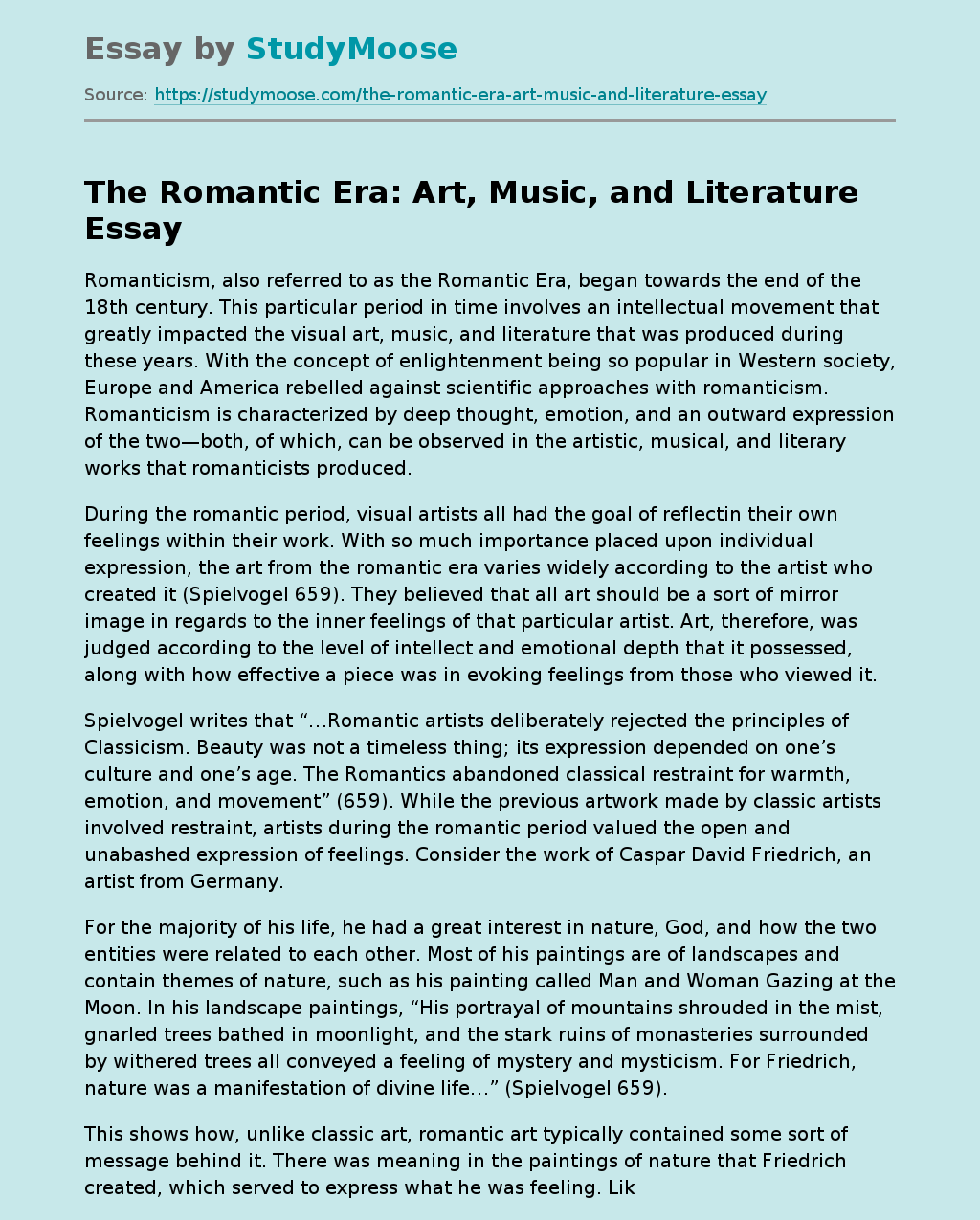