Philippine Literature During the Japanese Era

During the Japanese Occupation, when Tagalog was favored by the Japanese military authority, writing in English was consigned to limbo. It picked up after the war, however, with a fervor and drive for excellence that continue to this day. Stevan Javellana’s “Without Seeing the Dawn” (1947), the first postwar novel in English, was published in the United States. In 1946, the Barangay Writers Project was founded to help publish books in English.

Against a background marked by political unrest and government battles with Hukbalahap guerrillas, writers in English in the postwar period honed their sense of craft and techniques.

Don't use plagiarized sources.
Get Your Custom Essay on Philippine Literature During the Japanese Era Just from $13,9/Page

Viray, Vicente Rivera Jr., and Oscar de Zuñiga, among many others.

Fresh from studies in American universities, usually as Fulbright or Rockefeller scholars, a number of these writers introduced New Criticism to the country and applied its tenets in literature classes and writing workshops. In this way were born the Silliman Writers Summer Workshop (started in 1962 by Edilberto K. Tiempo and Edith L. Tiempo) and the U.P. Writers Summer Workshop (started in 1965 by the Department of English at the U.P.). To this day, these workshops help discover writing talents and develop them in their craft.

The arrival of the Japanese caused tremendous fear, hardships and suffering among the Filipinos. The Filipino way of life was greatly affected during the Japanese period. The Filipinos lost their freedom of speech and expression. The development of art was also stopped. Filipinos greatly feared the “zoning”. There were Filipinos spies hired by the Japanese to point those who were suspected of being part of the guerilla movement. The Japanese made some changes in the system of education.

Despite the terror and uncertainty brought by the Second World War and the Japanese rule in the country, playing and listening to music were among the leisure activities that somehow made life bearable for Filipinos.

Under their rule, the Japanese imposed their own music on the country. Japanese music was heard daily in radio broadcasts. Their songs were also taught in public schools. Students, however, never took these songs to heart.

The performance of jazz and Western music identified with the allied nations of the war was prohibited. Hence, the Japanese held conferences and lectures on Oriental music in Manila with the hope of diverting the loyalty of the Filipinos away from the Americans. The first was a Japanese Musical Mission to the Philippines held on May 7, 1943, with the support of the New Philippine Musical Federation headed by Kosak Yamada.

The Japanese nevertheless encouraged the creation and performance of music with native themes through music contests. Concerts were also a common form of amusement for Filipinos at the time and the Metropolitan Theater became an important venue for cultural events.

Classical music, including opera, flourished during the war. For instance, the New Philippine Symphony, the first all-Filipino orchestra, was organized. It performed an all-Philippine symphonic program in July 1942, with Francisco Santiago as conductor. The Philippine Conservatory of Music, an affiliate of the Philippine Women’s University, was one of the few music schools in the country that opened during the war.

Music-making remained a popular pastime in homes. Families sang and played musical instruments to entertain themselves. On special occasions, families held special concerts for themselves, as well as their friends. All these prove that even during turbulent times, Filipinos’ love of music could never be suppressed.

Three types of poems emerged during this period. They were: 1. Haiku – a poem of free verse that the Japanese like. It was made up of 17 syllables divided into three lines. The first line had 5 syllables, the second, 7 syllables, and the third, five. The Haiku is allegorical in meaning, is short and covers a wide scope in meaning. 2. Tanaga – like the Haiku, is short but it had measure and rhyme. Each line had 17 syllables and it’s also allegorical in meaning. 3. Karaniwang Anyo (Usual Form) – like those mentioned earlier in the beginning chapters of this book.

The drama experienced a lull during the Japanese period because movie houses showing American films were closed. The big movie houses were just made to show stage shows. Many of the plays were reproductions of English plays to Tagalog. The translators were Francisco Soc Rodrigo, Alberto Concio , and Narciso Pimentel. They also founded the organization of Filipino players named Dramatic Philippines. A few of playwriters were: 1. Jose Ma. Hernandez – wrote PANDAY PIRA

As a result of this selection, the following got the first three prizes: first prize: narciso reyes with his lupang tinubuan second prize: liwayway arceo’s uhaw ang tigang na lupa third prize: nvm gonzales’ lunsod nayon at dagat-dagatan Noteworthy writer of the period was Carlos P. Romulo who won the Pulitzer Prize for his bestsellers I SAW THE FALL OF THE PHILIPPINES, I SEE THE PHILIPPINES RISE and his MOTHER AMERICA AND MY BROTHER AMERICANS. Journalists include Salvador P. Lopez, Leon Ma. Geurrero, Raul Manglapuz and Carlos Bulosan. Nick Joaquin produced THE WOMAN WHO LOOKED LIKE LAZARUS. Fred Ruiz Castro wrote a few poems. F.B. Icasino wrote essays in The Philippine Review.

Because of the strict prohibitions imposed b the Japanese in the writing and publishing of works in English, Philippine literature in English experienced a dark period. The few who dared to write did so for their bread and butter or for propaganda. Writings that came out during this period were journalistic in nature. Writers felt suppressed but slowly, the spirit of nationalism started to seep into their consciousness. While some continued to write, the majority waited for a better climate to publish their works. Carlos Bulosan’s works included THE LAUGHTER OF MY FATHER (1944), THE VOICE OF BATAAN, 1943, SIX FILIPINO POETS, 1942, among others. Alfredo Litiatco published With Harp and Sling and in 1943, Jose P. Laurel published Forces that Make a Nation Great.

The Commonwealth Literary Awards gave prizes to meritorious writers. Those who won were: 1. LIKE THE MOLAVE – by Rafael Zulueta da Costa (Poetry) 2. HOW MY BROTHER LEON BROUGTH HOME A WIFE – by Manuel E. Arguilla (Short Story) 3. LITERATURE AND SOCIETY – by Salvador P. Lopez (Essay) 4. HIS NATIVE SOIL – by Juan Laya (Novel) President Manuel L. Quezon’s autobiography THE GOOD FIGHT was published posthumously. Radio broadcasts echoed the mingled fear and doubts in the hearts of the people. Other writers of this period were Juan Collas (19440, Tomas Confesor (1945), Roman A. de la Cruz and Elisa Tabuñar .

Philippine Literature During the Japanese Era. (2016, Dec 27). Retrieved from https://studymoose.com/philippine-literature-during-the-japanese-era-essay 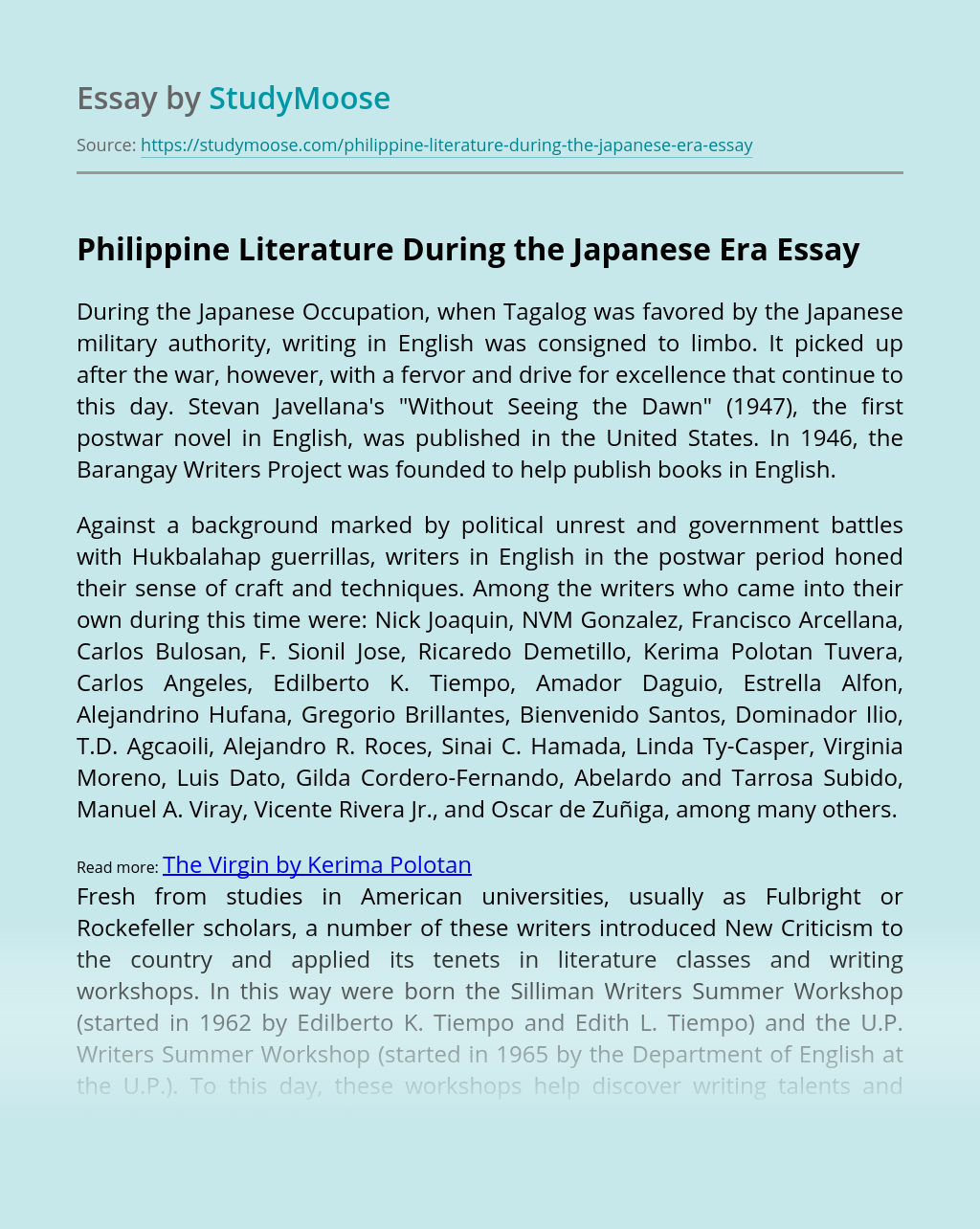 What was the outcome of Upton Sinclair's "The Jungle"?

Upton’s Sinclair’s The Jungle was a novel based on one employee who worked for a Chicago’s meat-packing factory. This detailed novel described horrendous conditions and gruesome visions of contaminated meat. This brought forth significant changes within the meat-packing industry. America’s business of canned meat was declining within the country as well as the world. Lack...

The Crucible takes place in Salem Massachusetts during 1692. It takes place during the tragic time of the so called Salem witch hunts when many innocent people were accused of being a witch or dealing with the devil. As a result of these convictions many people confessed to save their lives, others who would not...

According to philosopher Friedrich Nietzsche, religion is a “falsehood. ” The implications of the “death of God” addressed by Nietzsche are portrayed through the characters and the plot itself of the novel Jude the Obscure written by Thomas Hardy. Nietzsche believes that religion has influenced and distorted the value of truth, the influence of morality,...

Students who get the system of studying know that good grades lead to more freedom and responsibility in life. Some only want to have fun and focus on other things but it is said that their refusal to study did not fulfill them that is why they feel guilty and realize a need to change....