<macro level concept>
(Sample) Computer is traced as a product from the ancient times of computing devices that have been developed through the hands of generations’ pillars. Many did predict the transformation of computer in terms of appearance and potential uses, but no one wonder the phenomenal domination of computer in almost all arenas of man’s life as seen today. The birth of computer paved a way on the present mobility of technological trends in industries because of its enormous assistance and somehow, replacing human works.

(Sample) Still, technology is setting breakthroughs as it moves lengthily to ease man’s endeavors because of computer. In communication, technology makes the world just a village for people to live in. Today, resource sharing becomes an important part in utilizing strategies to maximize the use of data and information while minimizing the use of mediums such as computers and efforts. As a product of communication technology, Local Area Network (LAN) is introduced to meet the demand for multitasking due to huge amount of data and information that needs to be handled and manipulated.

It is used to connect personal computers and other peripherals that cover a limited range, such as a building, to allow sharing of resources and communication among users(www.webopedia.com). <study locale introduction>

As direct implementer, one of the programs it offers is providing scholarship and financial assistance to poor but deserving high school and college students but whose parents’/guardians’ monthly income is below the poverty line. Based on Ordinance No. 007-06 of 2006, the program entitled “Enhanced Scholarship Program (ESP) of the City Government of Tarlac City”. It replaced the City Ordinance No. 01-014 of 2001 entitled “Tarlac City Scholarship Program”, after five (5) years of implementation to embrace improvement in providing better service to the people of Tarlac City. <rationale>

(Sample) The researchers considered the number of scholars, financial and disabled grantees records the agency’s maintaining every year and the means of manipulating them in developing this study. The existing storage of these records is the Windows applications like Microsoft Word and Microsoft Excel. The unavailability of organized repository for records causes longer time in validating, searching and retrieving data and information of programs grantees. Also, creating and updating records require computers to be monitored physically to assure synchronization among the files. The researchers aimed to develop a computerized system to minimize the manual works of creating and updating of files through the LAN technology, to create a database and have organization of records, to produce correct data and information in reports and to maximize potential use of the computers in the office. Authority to records manipulation should also be established to assure records integrity Statement of the Objectives

This study aimed to create a(n) <title of the study>
(Sample) Specifically, the study sought to attain the following objectives:

1. To create an organized computerized recordings of each transaction

In conducting this study, the researcher believes that the system is beneficial to the <the beneficiaries of the study>.

1. (Sample) To the CSWD officer, the proposed system will allow systematic organization of records. To the <beneficiary>, the study can be a <the benefits of the system/study>. Scope and Delimitation

The primary objective of the study is to develop <title of the study> (Sample) The system is networked to the office of the CSWD Head office.
<state what are the boundaries of your study> The domain of the proposed system is to develop a computerized creation, processing, manipulation, storing and accessing of records in the CSWD. <state what are the capabilities of the system and what are the constraints of the system> The CSWD officers, scholars, financial and guardians of the disabled grantees would be the respondents of the study on its evaluation phase. The data that will be gathered from the respondents upon evaluation determines the performance of the proposed system against the existing system. <state the respondents of the study> Definition of Terms

The following terms were defined for better understanding the study. (Sample) Accessibility. It refers a term used to describe how easy it is for officer to get use and understand the system (Sample) Window. It refers to a visual area containing some kind of user interface, usually has a rectangular shape. It displays the output of and may allow input to one or more processes. <technical terms used in the study>

This chapter presents literatures and studies taken from different sources that are essential contributions to the present study.

(Sample) Today’s era is reflected by phenomenal changes in computer and communication technology due to advancements brought by the demands for flexible information management means. According to google.com, the computer holds a vast storage capacity with an ever-shrine king micro chip. It collects and store, analyzes, and systematizes, manipulate, retrieves and transmit data at great speed. <insert related concepts from books, references, websites,etc.> Related Studies

(Sample) A study entitled “A LAN-Based Registration, Information and Monitoring System of Pampanga Magalang Memorial Park and Development Corporation” by Kenneth Manalang (2004) et al. concluded that computerization is critical in meeting the demands of every business entities in the modern era. They pointed that the management’s effectiveness could be utilized by the use of automated systems and the development of the computerized system could lead to faster provision of needed information for clients. <insert related thesis studies> The study is related in the proposed system because of the information it handled are the same to the developed system. While a wider scope is being introduced by the proposed system, as the study concluded that the system could bring ease of work in updating and producing reports, which is one of the goal of the researchers’ proposed system. These related literature and studies serve as a guide for the researchers that the proposed system is feasible. They served as good samples for the researchers that the developed system could be a solution in accelerating and simplifying processes brought by the manual conditions through facts presented. Also, they give a better understanding on the domain of the developed study. <similarities and dissimilarities of the related studies to the researcher’s study> Conceptual Framework

Figure 1: Paradigm of the Study

METHODS OF STUDY AND SOURCES OF DATA

This chapter presents the methods of research in developing the system. It also includes the method of gathering data, the research instruments or analytical tools and the statistical treatment of the gathered data. *

In this study, the researcher made used of the Research and Development (R&D) approach where the system was designed, created, tested, and then validated on non-functional/functional requirements.

Figure 2: Software Development Methodology of the <title of the study>

Figure 2 illustrates the five (5) stages in accomplishing RAD in accordance of the system development. The first step is the Specification of Requirements Stage, during this stage the researcher met and interviewed stakeholders<narrate what are the processes taken in the study to execute the phase>

After the collecting stage, the data were organized. The following were used in the analysis and interpretation of data.
Tables were used for the presentation of data to facilitate understanding and to clearly show the preferences of the respondents.
Frequency distribution a tabular form that ranks the disorganized data from the highest to lowest and weighted arithmetic mean was used to facilitate analysis of the data.
Weighted Arithmetic Mean Formula:
X = x1f1 + x2f2+…+xn + fn / no. of respondents
Where: X = mean
xi = number of different values of x in the given set
Quantitative responses were analyzed by using descriptive statistics. Descriptive statistics are used to describe the basic features of the data in a study. It provides simple summaries about the sample and the measures. Together with simple graphics analysis, it forms the basis of virtually every quantitative analysis of data. Weighted arithmetic mean and frequency of the questionnaire items were calculated. All computation was done using computer software statistics. 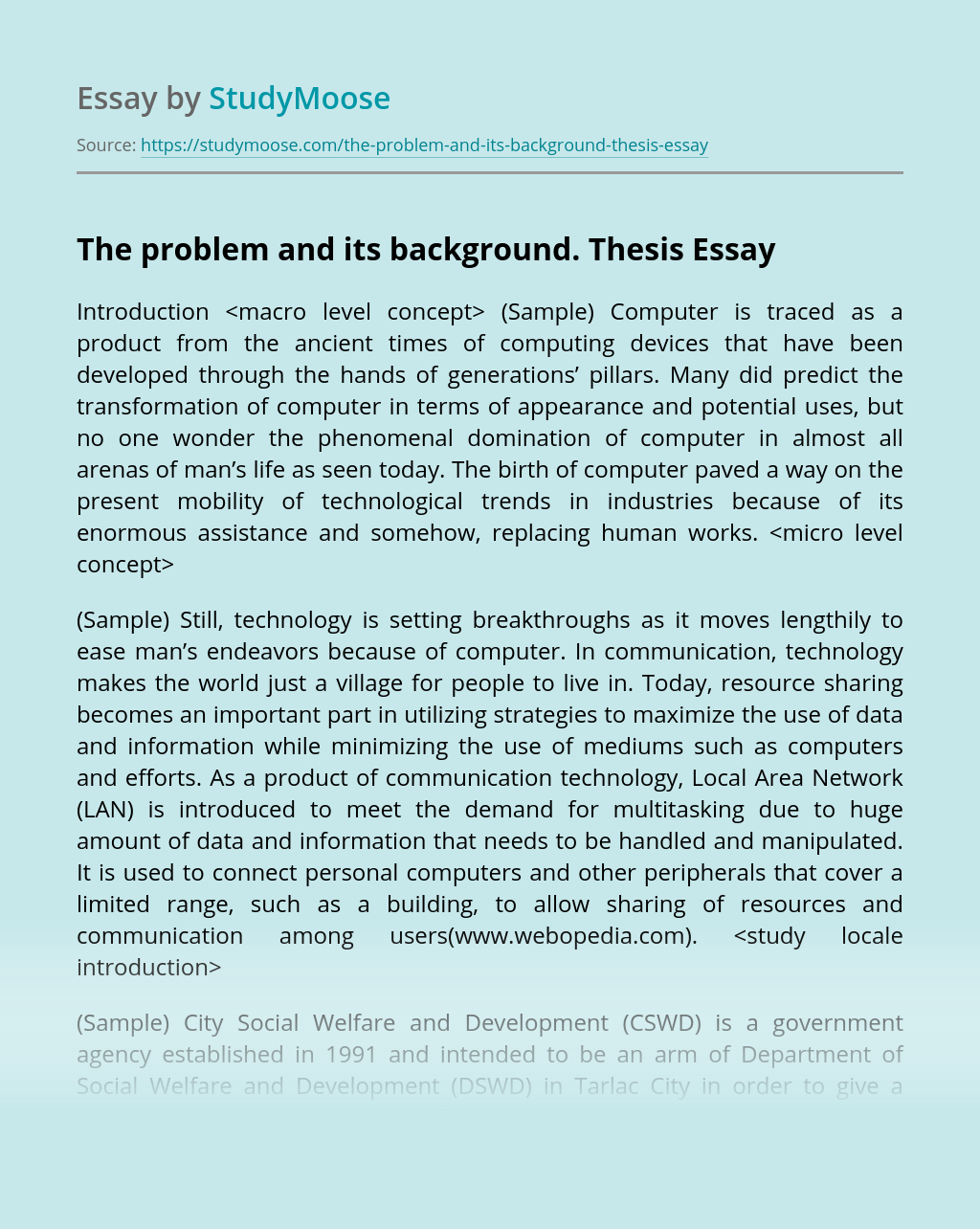