Who is a Leader: Examples of Good Leaders in History?

The question, “who is a leader and what makes a leader?” is as old time itself. The theory that leadership is inborn and not made has been a long lasting debate amongst intellects of diverse field of study. Since the beginning of time, humans have always looked up to a higher power, a leader for guidance. According to Oxford dictionary, “a leader is a person who guides or direct a group.” A leader is an influenced relationship among leaders and followers who intend real changes and outcomes that reflect their shared purpose.

Don't use plagiarized sources. Get your custom essay on
“ Who is a Leader: Examples of Good Leaders in History? ”
Get custom paper
NEW! smart matching with writer

A leader does not only contribute to the success of an organization or a community, but a blueprint, a representation of the organization itself. According to Melanne Verveer, an

American activist, “I believe to be a leader is to enable others to embrace a vision, initiative or assignment in a way that they feel a sense of purpose, ownership, personal engagement, and common cause. I was very affected as a child by my father’s positive example as a civic leader who inspired others to share his commitment to improving our community.

” Civilization is meant to improve the life of its people. An individual who is dedicated to further that agenda is a leader.

They are also bad leaders, dictators that terrorize the people that they govern, Adolph Hitler, Joseph Stalin and Saddam Hussein were examples of evil leaders that terrorize and manipulated their subjects. Bad leaders are the complete opposite of good leaders, they are egotistic and only concerned about furthering their agenda.

Inadequate leaders is not only detrimental to a group, but also to the organization in general. In order to avoid bad leaders in this present day, aspiring leaders of an organization should be put through rigorous training. Leaders are the pillars of the society, it is important for them to be good and compassionate individual.

A good leader is honest all the time and not some of the time, often times, leader’s will tell the truth only when it’s appropriate, when it works in their favor, leaders like that are deemed as selfish and only willing to further their agenda. Great leaders in history like Marcus Aurelius, Nelson Mandela and Martin Luther King Jr are perfect examples of a leader. They broke barriers through their selfless actions towards the growth of humanity. Leaders of these present times should endeavor to emulate these great leaders of history.

They are two kind of leaders, a good leader and a bad leader. A Leader in general is identified by the qualities in which they possess. Leadership is necessary in every aspect of civilization, even in biblical times, kings and priests were appointed by God to govern its people. Leaders are also messengers. Certain qualities such as humility, creativity, innovation, dedication, kindness are amongst several characteristics that a good leader must possess. They are three most important qualities that a good leader must possess are confidence, responsible and honesty.

A good leader must be responsible for not only the success of its people, but also its wellbeing. A responsible leader is someone who is able to make decisions and conduct behavior that enforces the growth of himself and the lives of his subject. A perfect example of a responsible leader is the great Nelson Mandela, who in my opinion is the greatest leader that ever walked this earth after our lord and savior Jesus Christ. He gave up his livelihood for the wellbeing of South Africans, a selfless individual. In an interview, Nelson Mandela said, “I have cherished the ideal of a democratic and free society in which all person live together in harmony and with equal opportunities. It is an idea which I hope to live and to achieve, but if needs be, it is an ideal for which I am prepared to die.” Death is a price, which a good leader must be ready to pay for the growth and progress of its people.

Another leader who showed responsibility was the great abolitionist, Harriet Tubman. She was a remarkable leader who deemed herself responsible for the lives and wellbeing of other people. “Most of those coming from the mainland are very destitute, almost naked. I am trying to find places for those able to work, and provide for them as best as I can, so as to lighten the burden on the Government as much as possible, while at the same time they learn to respect themselves by earning their own living.” Harriet Tubman. A good and responsible leader can also be self-appointed,

Furthermore, another important trait of a good leader is confidence. Confidence is the belief in one’s self and one’s ability to lead. A leader who exudes confidence by commanding respect and loyalty from his subjects. A leader must possess charisma, which comes with confidence. A leader must believe in himself first before he can gain the loyalty of others. Malcolm X was a great leader, an activist who exuded great amount of confidence. An American Statesman Collin Powell said, “Leadership is solving problems. The day soldiers stop bringing you their problems is the day you have stopped leading them. They have either lost confidence in your ability to help them or concluded you do not care. Either case is a failure of leadership.”

As a leader, confidence is a fuel that drives you, confidence breeds loyalty. A perfect example of confidence and bravery was the first lady of civil rights Rosa Louise McCaulay Parks. Her action of not giving up her seat started the revolution of the civil rights movement. She once said, “I have learned over the years, that when one’s mind is made up, this diminishes fear, knowing what must be done, does away with fear, each person must live their lives as a model for others.

Eleanor Roosevelt, an American political figure and activist is another leader who exuded confidence. Despite the limitations on women during that era, she spoke up, showed bravery and confidence in the face of criticism. In an interview by Mike Wallace, Eleanor Roosevelt said “You gain strength, courage and confidence by every experience in which you really stop to look fear in the face. You are able to say to yourself, ‘I have lived through this horror. I can take the next thing that comes along.’ You must do the thing you think you cannot do.”

In my opinion, the most important characteristics of a leader is honesty, it is the gateway for credence and inspiration. In an article by Michael Bunting, “In a survey of over 100,000, eight nine percent of the people found that the most valued leadership quality is honesty. In 2014, the survey gathered data from more than 33,000 respondents, discovered that only 20 percent of business leaders are expected to tell the truth, and only 13% of the people trust government officials to tell the truth.”

Honesty is a quality that is required more than any characteristics from our leaders, yet, this is a rare trait in most leaders. Honest leader is someone that is upright and trustworthy in their behavior, famous leader in history that displayed honesty more than any other leader is the sixteenth president of the United States Abraham Lincoln. He was so honest to the point were he was once called “Honest” Abe. Abraham Lincoln, in one of his speeches said, “I’m not bound to win, but I am bound to be honest. I am not bound to succeed, but I am bound to live up to the light that I have. I must stand with anybody that stands right, stand with him while he is right and depart from him when he goes wrong.” Lincoln was ethical in his dealings with people, regardless of their relationship with him.

In a setting were the subjects believes that their leader is honest and follows through in his messages and promises, they tend to be more loyal than a setting were the leader is dishonest and unaccountable. Another leader who was deemed has honest by its subject is the Roman Emperor Marcus Aurelius. Marcus Aurelius was regarded as the last of the five good emperors. In his book, the philosophy of stoicism, one of Marcus Aurelius main views were, “if it’s not right do not do it; if it’s not true do not say it.”

In conclusion, in today’s world, leadership qualities is essentially vital towards professional and personal development. A successful man should have leadership qualities. The power of influencing and motivating other people to achieve their goals are attributes that makes a great leader, a leader is responsible in improving the lives of his followers. In order to lead and control other people a leader should also be able to control himself. A good leader must have personal leadership, understanding his strength, desires and abilities and using them to improve his life and the life of his followers are the attributes of a good leader.

Over the years, leadership style and strategies have changed drastically. Back in the old days, a leader is someone who is able to exude dominance and power over a group of people. In this present time, a leader is someone who is willing to serve and follow. In a group, leadership becomes more of an association than a solitary role, every member is important in the success of the group. A leader is also responsible in getting everyone feel involve and wanted, followers are likely to contribute to the success of an organization if they feel that their input is relevant. Bringing people together is among the major responsibility of a good leader. Without good leaders in this world they will be chaos. Leaders are the pillars and building block of every society.

Who is a Leader: Examples of Good Leaders in History?. (2021, Mar 24). Retrieved from https://studymoose.com/who-is-a-leader-examples-of-good-leaders-in-history-essay 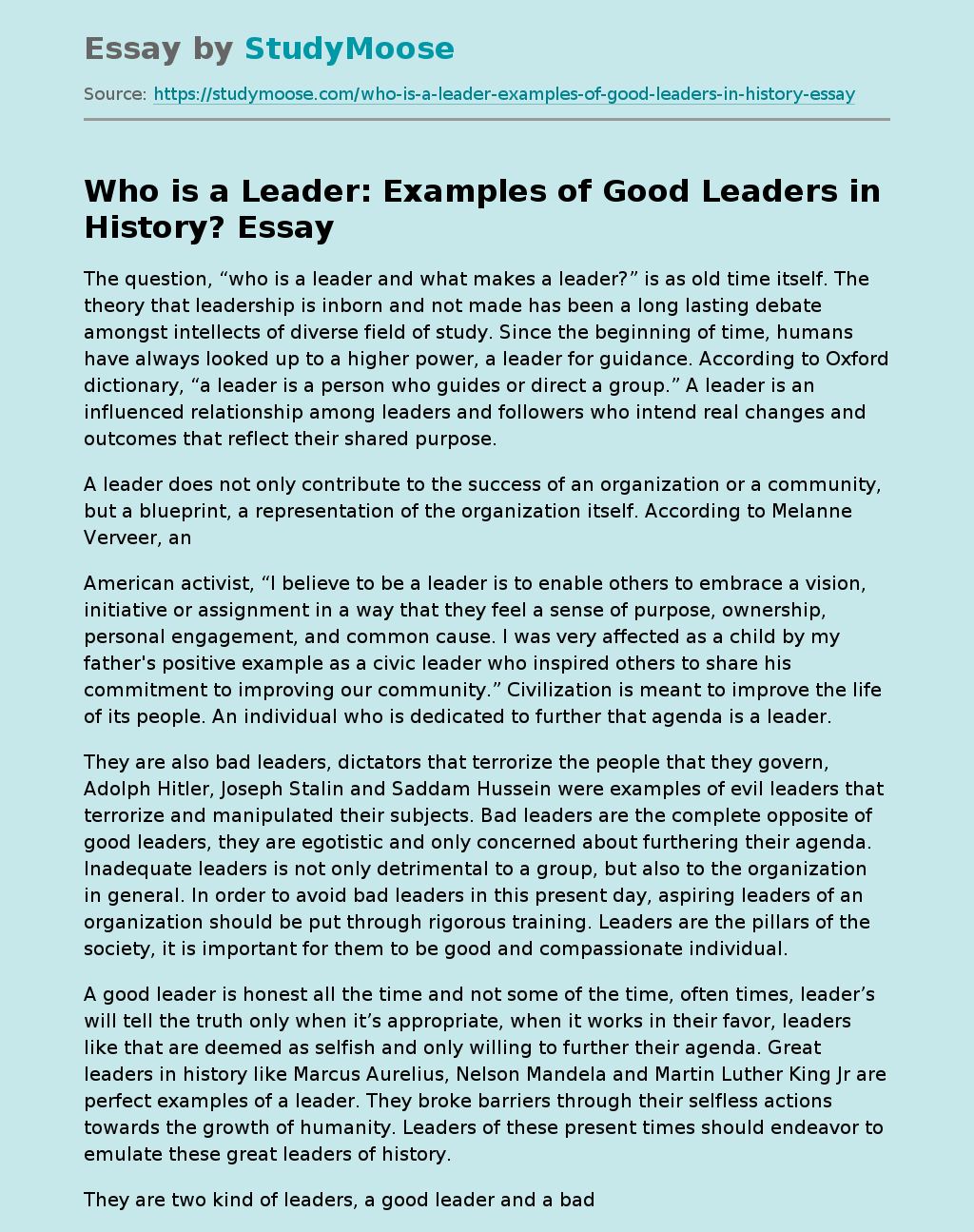