Was Odysseus A Good Leader

Homer’s epic poem, “The Odyssey,” is based on Odysseus’s struggles to return to his home with his men after the Trojan War. He is a legendary Greek king of Ithaca and the hero of the poem. Some may argue that Odysseus is not a valuable leader because he does not share everything with his team; however, Odysseus is a good leader because he cares about his crew, he is encouraging, and he is intelligent.
The compassion Odysseus has shown, proves that he is a good leader.

Don't use plagiarized sources. Get your custom essay on
“ Was Odysseus A Good Leader ”
Get custom paper
NEW! smart matching with writer

When Odysseus and his crew arrive upon the coastline of the Lotus Eaters, Odysseus sends 3 men to explore the island. While on the island, the men consume the Lotus which makes them want to stay on that island forever; leaving no desire to return home. Odysseus “drove them, all three, wailing, to the ships, tied them down under their rowing benches” (50-51). Odysseus believes that even though the men no longer yearn to return home, they truly wish to get back to their families.

This demonstrates Odysseus’s compassion because he cares for the well-being of his team.

Odysseus shows good leader qualities by encouraging his team. As his crew starts to lose hope, Odysseus knows exactly what to say: “Friends, have we never been in danger before this? More fearsome, is it now, than when the Cyclops penned us in his cave? What power he had! Did I not keep my nerve, and use my wits to find a way out for us” (74-78).

The speech that Odysseus gave to his crew shows that motivates his team to keep fighting and helps build their confidence while giving them hope. Through his empowering words of acknowledgement to his team, Odysseus shows superb leader characteristics.

Odysseus is intelligent and uses his wits to prove he is a good leader. When trapped in the cyclops cave, Odysseus has every chance to kill the cyclops with his sword. However, as Odysseus studies the situation, he concludes that if he “kills him we [will] perish there as well, for we could never move his ponderous doorway slab aside” (204-206). This shows that Odysseus analyzes every situation, which illustrates his intelligence and his ability to think ahead. To follow, Odysseus devises a plan that allows them all to escape. Using his wits, Odysseus shows the has the attributes of a good leader.

Some may claim that Odysseus is not a good leader, because he does not share all the information with his crew. Odysseus refused to tell his men what was in the bag until they reached Ithaca. The text states, “his men, believing that Odysseus was not sharing valuable treasures with them, opened the bag” (981). Because the men opened the bag, the arrival to Ithaca was prolonged. It can be argued that it was Odysseus’s fault because he was not sharing every piece of knowledge with his crew. Odysseus believes he was doing the best for his men by not sharing the information. This does not prove Odysseus is any less of a good leader because there is no such thing as “perfect.”

Odysseus is a good leader because he shows compassion, he is motivational, and he has rational thinking skills. Odysseus has shown repeatedly that he will do what it takes to succeed. His will to keep going confirms that he is a great leader.

Was Odysseus A Good Leader. (2020, Oct 01). Retrieved from http://studymoose.com/was-odysseus-a-good-leader-essay 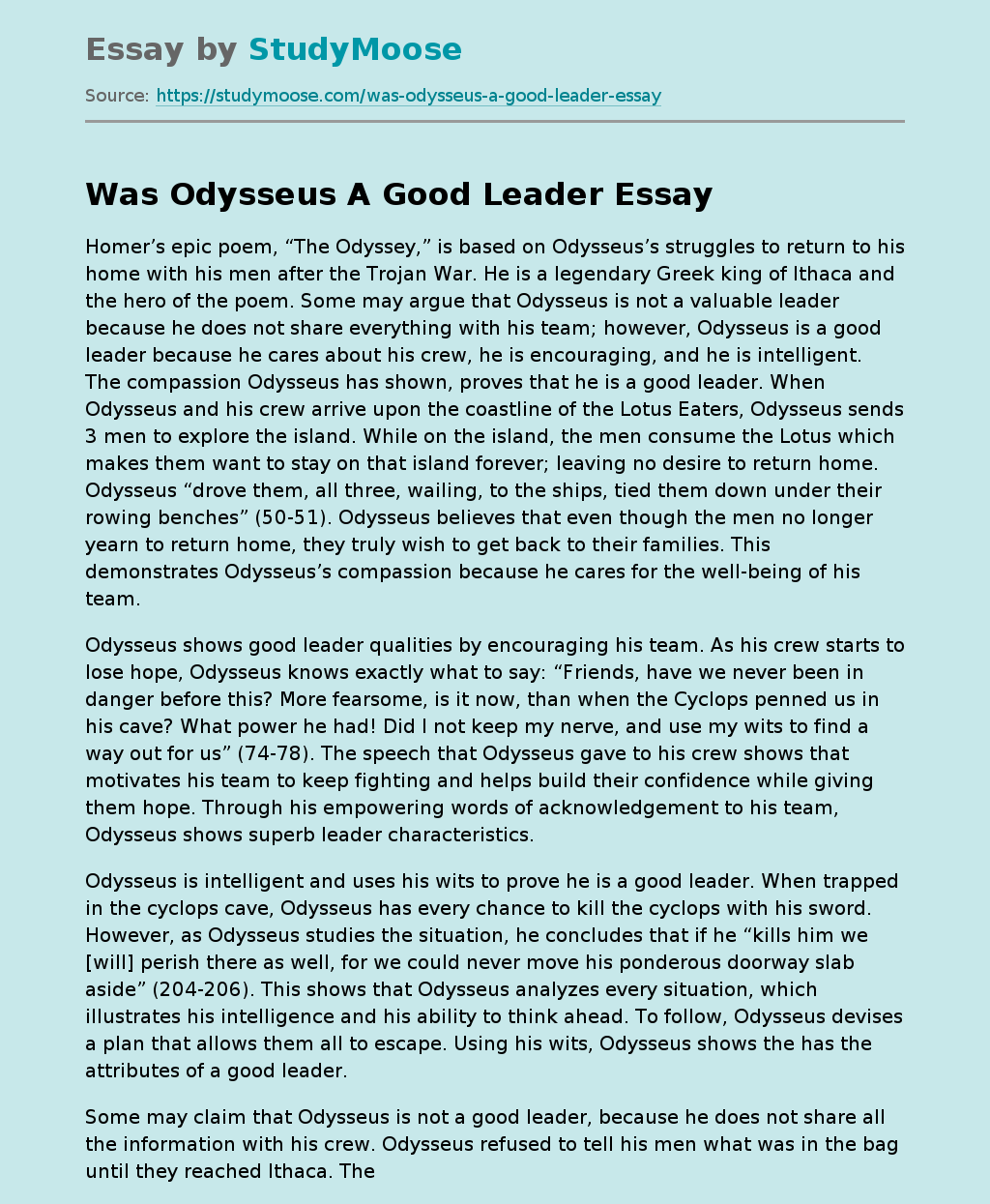