Selecting a good leader for a country is like dominoes. The leader needs to be somebody that won’t make the occasional mistake that would, in dominoes, hit one of the others and make them all fall down. If the leader does their job correctly, the country will be strong. A good leader must be able to make his own decisions because if he cannot, he will be considered a weak leader. A country’s leader must be able to communicate with the people as well because if he gets the people of the country to listen, then his job would be much easier.

Don't use plagiarized sources. Get your custom essay on
“ Julius Caesar – Qualities of a Good Leader ”
Get custom paper
NEW! smart matching with writer

Also, if the leader were noble to his countrymen, then there would not be any disputes within the country. In Julius Caesar, Mark Antony is a perfect example of a good leader. Not only is he a confident and noble person, he is also persuasive and that helps in becoming a good leader. Antony would be a good leader of Rome because he is confident, noble, and persuasive.

He never changes his mind when he makes a decision and that is good in a leader.

When the triumvirate was making a list of people to kill, Antony came across the name of his nephew. Even though it was his nephew that he was killing, Antony said, “He shall not live; look, with a spot I damn him.” (IV.i.9) Antony had to kill his nephew, who might oppose him, and he did not want to take the chance.

Another part where Antony’s confidence in decision-making was when he was talking to Octavius about Lepidus. The triumvirate was made up of three people, Antony, Lepidus, and Octavius, and so “The threefold world divided, he should stand / One of the three to share it? (IV.i.14-15) Antony meant that Lepidus would not be capable of ruling a third of the world, and that he would rather take half and Octavius take the other half. Antony’s confidence shows him being capable of being a great leader.

Along with being confident, Antony would make a great leader because of his nobility towards others. Antony was seen to be noble towards Caesar. The two men were close to each other like a mother and her child. When Caesar died, Antony wanted revenge for Caesar. And Caesar’s spirit, ranging for revenge, “With Ate by his side come hot from hell / Shall stir these confines with a monarch’s voice / Cry “Havoc!” and let slip the dogs of war / That this foul deed shall smell above the earth / With carrion men, groaning for burial. (III.i.270-275) Caesar was like family to Antony and when Caesar was killed, Antony wanted Caesar’s spirit to rest easier, and so he went to get revenge for Caesar.

Besides being noble to Caesar, Antony was noble to the countrymen as well. When Antony came to give his speech about Caesar at the town, the people were listening to him respectively. Antony knew about Caesar’s will and he did not have to tell the citizens about it. Since Antony was a good person he read the will and he said “To every Roman citizen he gives, / To every several man, seventy-five drachmas.” (III.ii.244-245) Being a good person as he is, he read the will as the people wanted so they would be content. Antony’s nobility shows him to be worthy in becoming a good leader of Rome.

Along with being confident and noble, Antony would be a great leader because he can be persuasive. Since Antony had great speaking skills, he could get people to think the way he wants them to think. After Caesar’s death, Antony met up with the conspirators and he decided to make them think he would forget about the assassination. He said, “I doubt not of your wisdom. / Let each man render me his bloody hand.” (III.i.202-203) The conspirators thought that Antony had forgiven them, but the truth was that Antony was going to make the public turn against Brutus and the conspirators. When it was time for Antony to make his speech about Caesar to the countrymen, he used his speaking skills and got the countrymen on his side. The citizens were moved by his speech and said, “We’ll hear him, we’ll follow him, we’ll die with him.” (III.ii.211) The countrymen were listening to Brutus’ words at the beginning and they were agreeing with what he said. Now Antony had gotten the people to listen to him and follow him.

Antony uses his speech skills to win the heart of the crowd and he makes the people feel how he wants them to. He said, “Good friends, sweet friends, let me not stir you up / To such a sudden flood of mutiny.” (III.ii.12-13) That quote probably made the crowd want to know more of what Antony had to say, and that was what Antony wanted. So, the ability to persuade people is a very important element in being a good leader. A successful country must have a good leader, and Antony has the ability of being a great leader. He can persuade people into thinking as he does and he is noble to the people of the country. He gives the people an opportunity to say what they have to say instead of just going on his own beliefs. He is also very confident in himself and so whatever he decides to do he does, and does not change his mind. Not only is he noble to his friends, he is also noble to the people of the country as well. With Antony as a leader, the country would not go bad since he is a person who does thing right. Mark Antony was an honorable and powerful man, and so he would be a great leader. 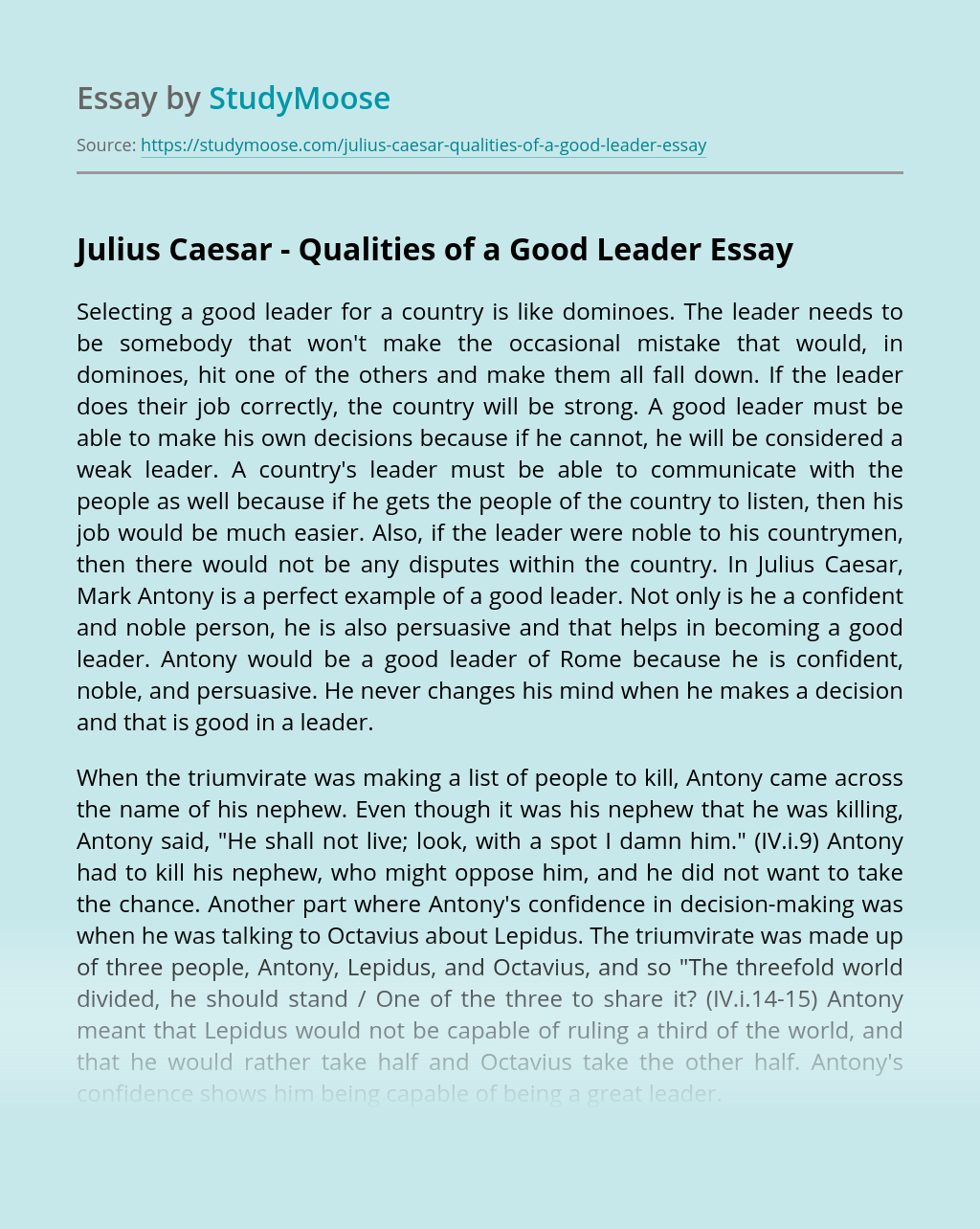