Julius Caesar shows that people respond to power and glory in different ways. Discuss. William Shakespeare’s Julius Caesar has a strong focus on the response that various characters display to power and glory, and how and why this response may vary between them. Shakespeare shows contrast in response to superiority heavily throughout the text, and explains that people’s retaliation to it will always differ. Where focus for some, lies in the attainment and holding of power, others prefer a view of conserving Rome’s traditional government system.

Contrast is seen strongly in character’s views of Caesar’s death, and also in their opinions of the preceding events and Caesar’s gain of power. Despite these differing factors, all characters are portrayed to have some kind of lust for power, and intention to gain authority over citizens. These qualities are seen most strongly across the protagonists of the story: Caesar, Brutus, Cassius and Antony.

Throughout the text, characters claim to oppose Caesar’s rule for the pure reason of conserving the traditions of Rome’s government and heritage, but some developments strongly suggest the ulterior motive of desire for power.

The idea of “[Rome’s] wide walk [encompassing] but only one man” is daunting to Cassius, and he particularly portrays this throughout the play, joined by Brutus, claiming that the assassination of Caesar brings them “peace, freedom and liberty”. However, opposing this, Cassius states that he “was born as free as Caesar” and thus is equally deserving of power, implying envy or resent toward the omnipotence Caesar achieves.

Brutus feels as though Caesar’s leadership would negatively impact Rome and the good that Roman citizens have achieved. In contrast, Caesar and Antony both claim that Caesar’s rule would be positive for Rome. Antony, as a strong supporter, stands by Caesar and claims that Caesar does have love for Rome, and would never have put the fate of Rome in danger. Although he states this verbally much later in the play, this is seen through Antony presenting the crown to Caesar upon his return to Rome from defeating Pompey. Caesar himself believes that he is worthy to rule Rome, and wants to gain the trust and support of the Roman citizens.

He begins to do this by rejecting the crown when offered it, knowing that many people would be unhappy with the acceptance of the crown, and the subsequent ending of the Republic, however it is evident that his intentions may change. When told to attend the Senate as the crown is going to be offered to him again, Caesar eagerly takes this opportunity, implying his desire. Although he is “for the good of Rome”, he still has intention to go against the system of government in place for omnipotence.

Upon Caesar’s assassination, the opinions of many characters is shown to vary strongly, and this becomes increasingly evident as the text continues. Antony instantly ridicules the reasoning of the assassination, saying that he was not “ambitious” in the sense of gaining supremacy, as he was “thrice presented…a kingly crown” and “he did thrice refuse”, posing his said “ambition” to be questionable. This is a sign of his tranquility toward power and those who have acquired it, contrasting with Cassius, who feels it is unruly for Caesar to “bestride the narrow world” as the sole leader of Rome, and sees that this is fair reason for Caesar’s assassination. Cassius here appears to have desire for power, and to use Toward the conclusion of the text, upon taking their own lives, both Cassius and Brutus formally verbalise their views of their intentions in Caesar’s assassination, but they also have differing responses to what they have done.

While Brutus seems to show regret over killing Caesar, Cassius seems bitter about Caesar’s death, with the claim that Caesar was “revenged” by Cassius’ suicide, as if to entitle him with the blame for his death. Brutus seems regretful, as he states that Caesar was killed “with half so good a will” than himself, saying that he is more deserving of death, and bidding Caesar to “be still” in his death. The protagonists’ views on the assassination drive forward the strong ambition they show to attain power themselves, and their feelings toward those who are in power.

Opinions of Caesar’s success are heavily contrasted between the story’s protagonists to emphasise how they see glory and fame, particularly comparing Antony and Cassius. Their views oppose each other, with Antony strongly supporting the success and rise of Caesar, where Brutus claims that Romans “as underlings” should be striving to go against Caesar’s reign, and change the way Caesar is leading. Antony focuses strongly on Caesar’s leadership as a positive part of Rome’s society, and the love Caesar displays to the people. He signifies this by “thrice [presenting Caesar] a kingly crown”, and telling the people of Rome of Caesar’s great feats. Although the main contrast lies here, both Brutus and Caesar himself have their own opinions, both of which somewhat contrast with the views of Antony and Cassius.

Brutus responds to Caesar’s reign by questioning Caesar’s character, and pondering the idea that Caesar’s crowning “might change his nature”, implying that he may become a worse person because of it. Caesar himself has a positive response to his gain of power, but soon it seems as though power soon goes to his head, and he begins to make rash decisions that regard the people of Rome more harshly. Each protagonist has a different approach to Caesar’s reign, and each character responds to his rise in their own individual manner.

The segregation of opinions in regards to power and glory is contrasted in itself by each character’s shared desire for power. This element of the text is seen at some times more strongly than others, as characters portray their emotions through private and public thoughts differently, and express more in what they think privately. Cassius, although seemingly “for the good of Rome” is described by Caesar to “[have] a mean and hungry look”, implying that he has desire for power, which is also seen through the implication of his bitterness and envy of Caesar when he claims that he was “born as free as [him]”. Brutus is probably the least power hungry of characters, although he still does desire power and fortune, as he claims he “would not have it so” with Caesar a ruler, yet he still “[loves] him well”.

Antony seems to want the attention and respect of people in the assembly of Roman citizens more than legitimate power over them, and uses his public speaking and persuasive skills to achieve this, with his repetition of the phrase: “Brutus is an honourable man” to condescend and degrade him. Caesar is the most power hungry of them all, although does not seem it in his rejection of the crown. He wants “men about [him] who are fat” in the sense of knowledge, and content with the power they have, as he does not want anyone stealing his power from him. Each protagonist shares this lust for glory and prestige, and each in a sense gains some triumph throughout the text.

Although there is a shared desire to obtain and hold power, the characters Shakespeare portrays in Julius Caesar depict the differing responses that many characters can have to the power they have, or the power those around them have emphatically. They may share some aspects of their reactions, or portray it in a similar sense, but overall, the characters views and opinions vary heavily throughout the text. Each aspect of the response characters have is seen in all four, but in each it opposes, as seen through the choices and reflections that characters portray. 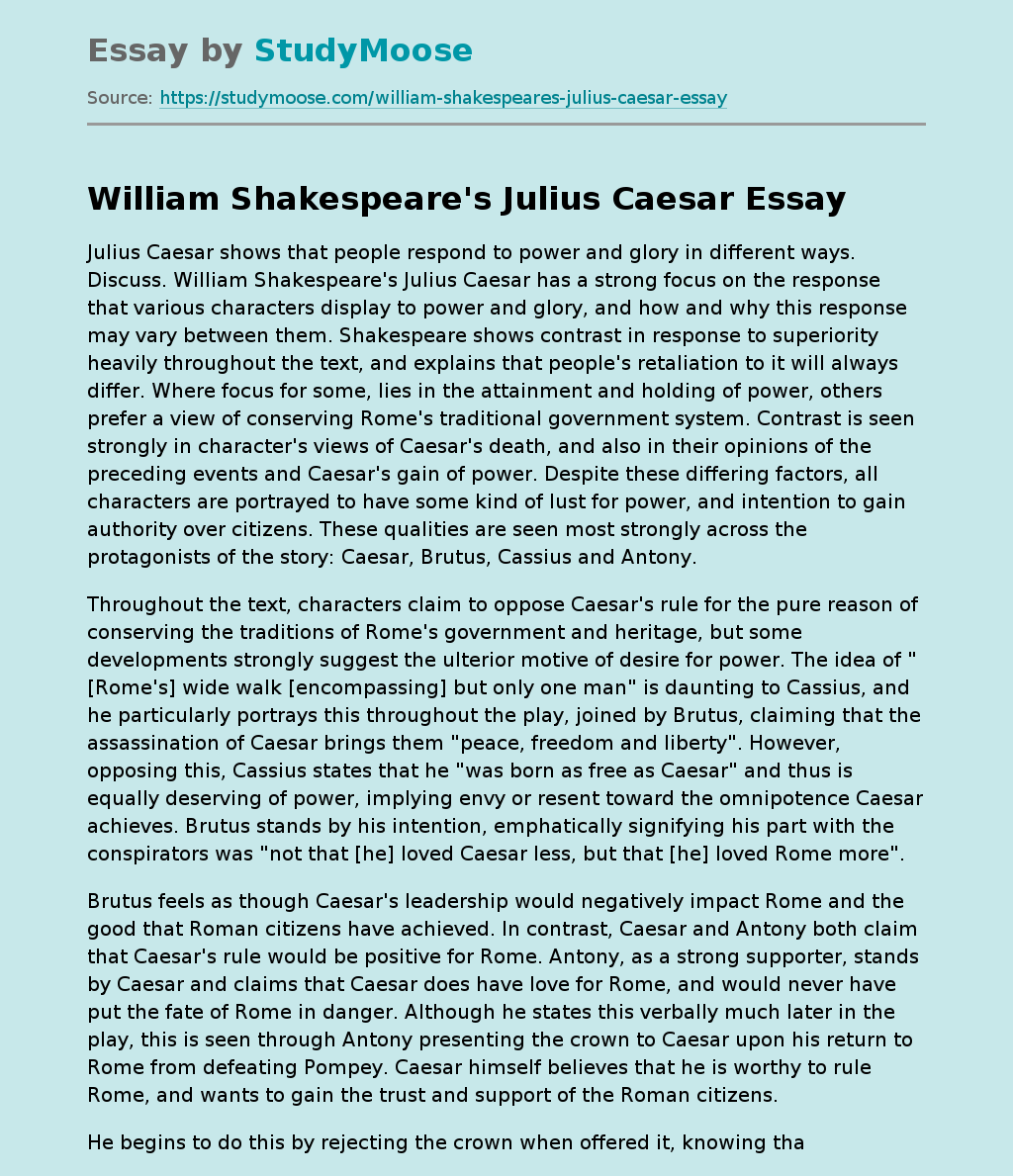