Odysseus as a Leader

Turn in your highest-quality paper
Get a qualified writer to help you with
“ Odysseus as a Leader ”
Get high-quality paper
NEW! AI matching with writer

Odysseus is a bad leader because of his bad decisions.

Odysseus is good at analyzing things to make them perfect so that nothing goes wrong. In the Odyssey, he and his crew go into a cave to rest. While there, they get trapped in by the cyclopse, Polyphemus, who is Poseidon’s son. At one point, Odysseus has a chance to wound him with his sword, but realizes that if he does they could be trapped forever.

He then comes up with a well thought out plan. (Book 9, Lines 343-344) Odysseus thinks to himself, “And now I pondered how to hurt him worst, if but Athena granted what I prayed for.” The plan is to get Polyphemus drunk off of wine, put red hot fire in his eye to blind him and leave the next morning while hiding under the bellies of his sheep. The plan is successfully executed the way Odysseus thought it out. When Odysseus executes a great plan and him and his crew stuck to it, it will work.

That’s one thing that makes him a good leader. In conclusion, Odysseus helped him and his crew by his great analyzing techniques.

Another thing that makes Odysseus a good leader is how he knew when and how to trust his crew. For example, he wants to hear the Sirens because no one has ever lived through it. Odysseus tells his crew to plug their ears with beeswax and tie him down to the mast of the boat, and to not let him go no matter what he does or says. (Book 12, Lines 214-216) “They tied me up, then, plumb amidships, back to the mast, lashed to the mast, and took themselves again rowing.” His crew and him were successful and made it through without losing anyone. It is important for Odysseus to believe that his crew wouldn’t untie him from the mast of the boat through the Sirens. Odysseus tries to get out, but the crew only ties him tighter. As a result, it shows that with enough of Odysseus’ trust in his crew they can pull of even the hardest task.

Meanwhile, Odysseus is very clueless at times and doesn’t tell his crew all that he knows. After Odysseus and his crew sail away from the Cyclopes, they get to Aeolus. Aeolus gives Odysseus a bag of winds that will guide him and his crew home. After ten days, they are very close to Ithica. While the crew is talking about the bag, Odysseus should’ve been close by and made sure they didn’t open the bag, but instead he fell asleep. (Book 10, Lines 47-50) “Nigh home we are with empty hands. And who has gifts from Aeolus? He has, I say we ought to crack that bag, there’s gold, silver, and plenty in that bag!” The crew thinks that the bag has fortune in it, so they open it. The winds escape and make a storm that blows them back to Aeolia. Consequently, Aeolus doesn’t help them at all. In result of Odysseus not telling his crew about the bag, they faced another setback.

Odysseus’ pride was another downfall he had. After Odysseus and his crew got past Polyphemus, he makes a bad decision. He yells out his own name and address. (Book 9, Lines 548-552) “Kyklops, if ever mortal man inquire how you were put to shame and blinded tell him Odysseus, raider of cities, took your eye: Laertes son, whose home’s in Ithica.” Once Polyphemus hears him he prays to his father, Poseidon, to get revenge on Odysseus. Odysseus only wanted to be known for taking down and animal so much bigger than him, but instead he ends up paying for it. By Odysseus not holding his tongue back, he caused more setbacks in their journey back home.

In the Odyssey, Odysseus wasn’t the best at making good decisions because of his bad luck and gullible personality. In book 12, Odysseus had to lead his crew through Scylla and Charybdis. Along the way, Scylla swoops down and eats six of the sailors. In another scene, Odysseus comes to Thrinacia, the island of the sun. He wants to avoid it, but Eurylokhos persuades Odysseus to let him and the rest of the crew to stay there to relax for a while. (Book 12, Lines 364-368) “Eurylokhos says, “No: pull out to sea, you say, with night upon us- just as before, but wandering now, and lost. (Book 12, Lines 380-381) Odysseus says back, “Eurylokos, they are with you to a man. I am alone, outmatched.” They end up having to stay there for a month due to a storm. Because Odysseus is easily persuaded by what Eurylokos, they end up having bad luck with a storm and are forced to stay there for a month.

Homer’s message in The Odyssey is that there are many types of leaders; good ones show success, and bad ones show failure. Odysseus is a good and bad leader and he commits both success and failure. A good leader is honest, driven to success and a role model for others. A bad leader can have good qualities, but is not quite strong enough to stand up for what the leader believes. A leader in the real world could be a coach, a teacher, a president, etc. A good coach has a good team, a good teacher has hard working students, and a good president has a smooth-moving country. A bad teacher has disrespectful students, a bad coach has a lazy team, and a bad president has a country that doesn’t run well. The leader should be one to follow, just like the game, follow the leader. Most likely good leaders will succeed and bad leaders will fail.

Odysseus as a Leader. (2016, Oct 31). Retrieved from https://studymoose.com/odysseus-as-a-leader-essay 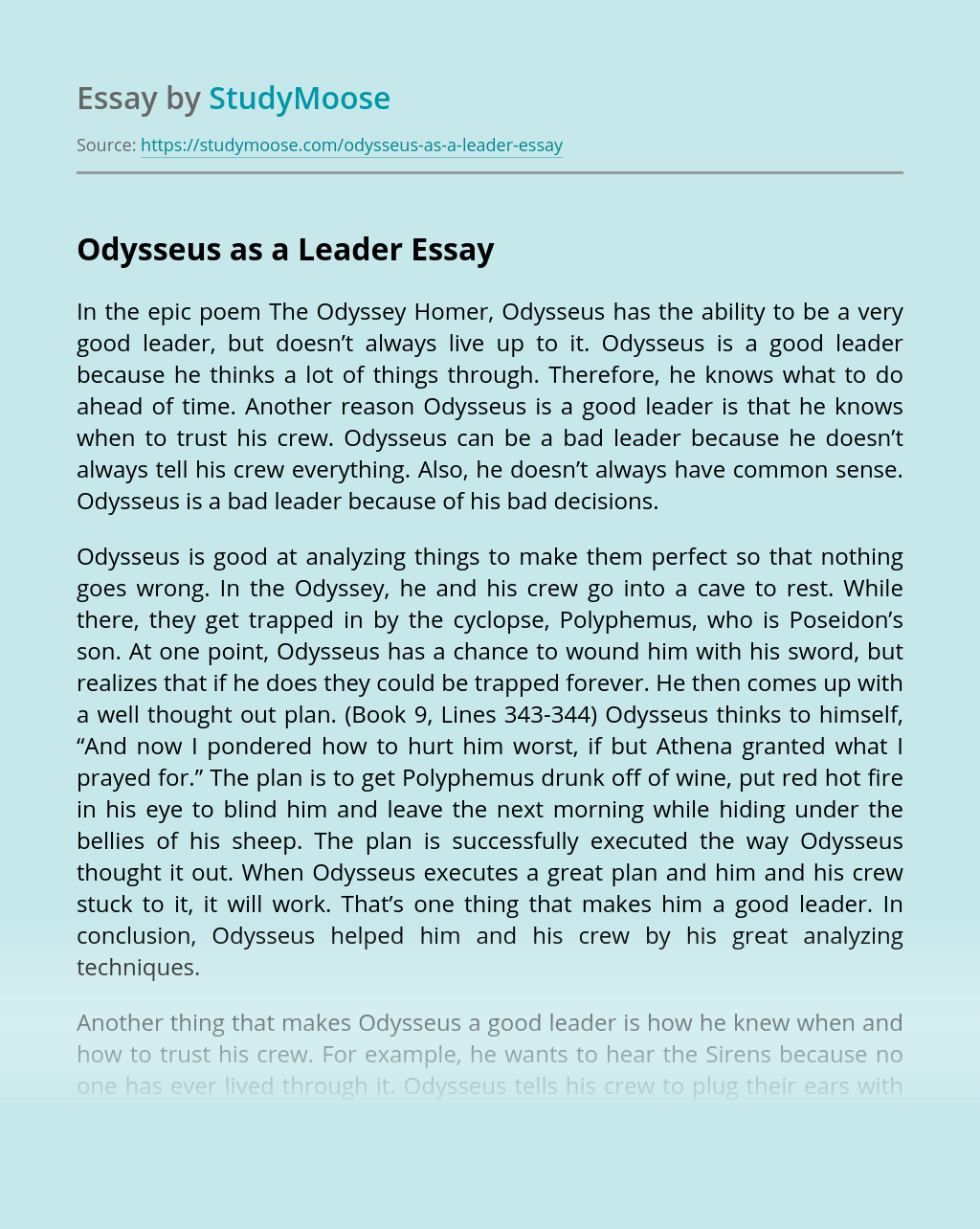 Turn in your highest-quality paper
Get a qualified writer to help you with
“ Odysseus as a Leader ”
Get high-quality paper
Helping students since 2015
Stay Safe, Stay Original