A reflection of Odysseus and Modern Day Heroes

Written about two thousand and seven hundred years earlier, the Odyssey is still influencing modern storytelling today. Odysseus, the legendary Greek king of Ithaca and protagonist of Homer’s epic poem the Odyssey was recognized as a great hero of his time. He was known for his defining qualities of superior strength and athleticism, sharp intellect, sensual ness, and a thirst for glory. These character traits are still being used to attribute modern day fictional heroes such as Neo, Captain Jack Sparrow, James Bond, and Spiderman.

Turn in your highest-quality paper
Get a qualified writer to help you with
“ A reflection of Odysseus and Modern Day Heroes ”
Get high-quality paper
NEW! AI matching with writer

Accordingly, the heroic qualities of Odysseus can be still be seen in today’s modern day fictional heroes.

Odysseus’s superior strength and athleticism resembles to modern day character of Neo in The Matrix. In the Odyssey, Penelope told the suitors that she would marry who ever was able to string Odysseus’s old bow and shoot it through twelve axe heads. Many suitors attempted this task but not a single one was even strong enough to string the bow.

However, “Without any strain, Odysseus strung the great bow… Taking the string and the head grooves he drew to the middle grip, and from the very chair where he sat, bending the bow before him, let the arrow fly, nor missed any axes from the first handle on, but the bronze-weighted arrow passed through all, and out the other end” (Homer, 319 – 320). Odysseus’s ability to string the incredibly stiff bow and to shoot it through twelve axe heads when not a single other suitor could do it depicts his sheer strength and athleticism.

This ability is also apparent with Neo from the movie The Matrix.

In the movie, Neo has the ability to freely manipulate the simulated reality of the Matrix. This skill, allows him to have superhuman strength and agility, and the ability to brush off attacks that would kill or disable a normal human being with relative ease. There is a particular scene that exemplifies this where Neo fights off about thirty agents with his bare hands. As depicted in the script written by the Wachowski Brothers, “Their attack is a devastating onslaught of speed and power closing in around Neo like a vise. But Neo is a mirage, slipping and flipping around them in a deadly counter attack, heaving agents in the air” (Wachowski Brother, 18). Neo’s superhuman strength and athleticism is comparable to Odysseus. Both characters are way stronger and quicker than the average warrior, which enables them to fight off exceptional opponents. Besides Brute strength, Odysseus shares many other deeper qualities with modern day heroes.

Captain Jack Sparrow from Pirates of the Caribbean shares Odysseus’s knack for quick thinking and cleverness. Odysseus demonstrates this trait when trying to escape from the Polyphemus’s cave by tricking Polyphemus into thinking that his name is Nobody. When Odysseus finally attacks the Cyclops and blinds him, Polyphemus cries for help saying, “‘Good Friends, Nobody is killing me by force or treachery.’ So then the others speaking in winged words gave him an answer: ‘If alone as you are none uses violence on you,'” (Homer, 147). Odysseus’s cleverness to say that his name is Nobody prevents the other Cyclopes from entering the cave and allows him escape with his men. Captain Jack Sparrow also possesses this same trait of cleverness.

Sparrow is often out skilled in sword fighting by other characters so he resorts to using negotiation in order to distract his enemies or turn them against each other. Sparrow stated, “Why fight when you can negotiate? All one needs is the proper leverage” (Walt Disney Pictures). There is a scene that exemplifies this when a group of soldiers catch Sparrow trying to steal one of their ships. The Soldiers ask Sparrow, “What’s your business in Port Royal,? And no lies!” Sparrow answers, “I confess: I intend to commandeer one of these ships, pick up a crew in Tortuga, and go on the account, do a little honest pirating” (Walt Disney Pictures). Sparrow is so openly honest about his mischief that the soldiers don’t even believe him. This clever use of words and psychology help Sparrow escape from the Soldiers and eventually steal their ship. Both Sparrow and Odysseus use this type of sharp cunning intellect to get what they need.

Odysseus also shares his trait of sensual ness to women with the modern day hero of James Bond. There were numerous occasions where Odysseus came across a beautiful woman and lived a luxurious life with her before continuing his journey home. Three such examples were Calypso, Nausicaa, and Circe. With Circe in particular, Circe turned all of Odysseus crew into swine, but he was able to resist her powers, which caused her to fall in love with him. Odysseus then decided to spend a year of luxury on her island as her lover. Odysseus said, “We sat there feasting on unlimited meat and sweet wine. But when the sun went down and the sacred darkness came over… but I, mounting the surpassingly beautiful bed of Circe, clasped her by the knees and entreated her” (Homer, 164). Odysseus enjoyed his luxurious life with Circe in an exotic land, but only to a point. Eventually, he decided to focus on the greater task at hand and return home to Ithaca.

James Bond possesses this same trait of sensual ness towards women throughout all of the bond films. In just about every film, Bond comes across a beautiful female that he ends up spending an intimate time with before going off to save the world. In Casino Royal, Bond enters a relationship with Solange. Solange says to Bond, “What is it about bad men? You… my husband. I had so many chances to be happy, so many nice guys. Why can’t nice guys be more like you?” Bond replies, “Because then they’d be bad.” Solange kissing him some more, “Mmmmm, yeah…!” (MGM). Bonds smoothness and intellect help him win over the hearts of numerous women just like Odysseus. However, both Bond and Odysseus never get too wrapped up in a relationship to forget what their greater goals are. Bond always moves on and saves the world and Odysseus always leaves his lover in order to return home to Ithaca. Both characters have a strong sense of sensual ness towards females, but it never seems to distract them from their main goals.

Lastly, a trait that may not be seen as positive is Odysseus’ lust for pride and glory, which is shared with the modern day hero, Spiderman. Like other Greek heroes, Odysseus longed to win kleos, which is glory won through great deeds. This kleos sometimes led Odysseus into taking pride in his own glorious acts when it wasn’t really necessary. After cleverly tricking the Polyphemus and escaping from his lair, Odysseus said, “Cyclops, if any mortal man ever asks you who it was that inflicted upon your eye this shameful blinding, tell him that you were blinded by Odysseus, sacker of cities” (150, Homer). Odysseus could not resist his thirst for glory after defeating the Cyclops and needed to reveal his name for the sake of his own pride. Peter Parker as Spiderman possesses this same quality. When Peter first learned of his new spider powers, he tried to use them to impress other people. He took pictures of himself fighting criminals and sent them to the newspaper for people to see. He wanted other people to see how amazing his powers were and to glorify him for them.

According to the story synopsis, “At first, Peter decides to use these powers to make money to impress Mary Jane. He appears in a wrestling match and, armed with his new spider strength, wins the match in record time” (Marvel, and Columbia Pictures). Peter used his powers to glorify his own image just like Odysseus. However, this trait between the two characters does not benefit them in any way, so why is it relevant between two heroes?The fact that both Odysseus and Spiderman had a strong sense of pride provided room in the stories for it to be overcome. This trait of pride had drastic consequences for both characters. Spiderman’s pride caused him to spend too much time on impressing other people when he could have been a hero. This prevented him from saving his uncle Ben from being murdered because he was preoccupied.

Odysseus pride caused him to reveal his true identity to Poseidon, who in turn seeked vengeance on him. This lead to a great amount suffering that Odysseus had to endure on his journey home. However, both characters were able to overcome their pride to a certain degree by the end of the stories. Spiderman eventually learned that “with great power, comes great responsibility” and to use his powers to protect the city from evil and not for his own glory (Marvel, and Columbia Pictures). By the end of the epic, Odysseus seemed much more willing to temper pride with patience. When disguised as a beggar, he did not immediately react to the abuse he received from the suitors. Instead, he endured it until the trap was set for him to strike down on them. In a sense, the quality that was passed down from the Odyssey to modern day heroes is the ability to overcome pride and the glorified self.

Many of today’s fictional heroes resemble the character traits of Odysseus. Odysseus’ brute strength and athleticism can be seen in Neo. His cleverness and quick thinking resemble Captain Jack Sparrow. His sensual ness towards women, but without losing sight of the greater goal is comparable to James Bond. And his pride and thirst for glory is shared with Spiderman and how both of them were able to suppress it. Overall, it’s remarkable that today’s characters still resemble such an ancient hero. Will our idea of what makes a hero ever change?

A reflection of Odysseus and Modern Day Heroes. (2016, Aug 02). Retrieved from https://studymoose.com/a-reflection-of-odysseus-and-modern-day-heroes-essay 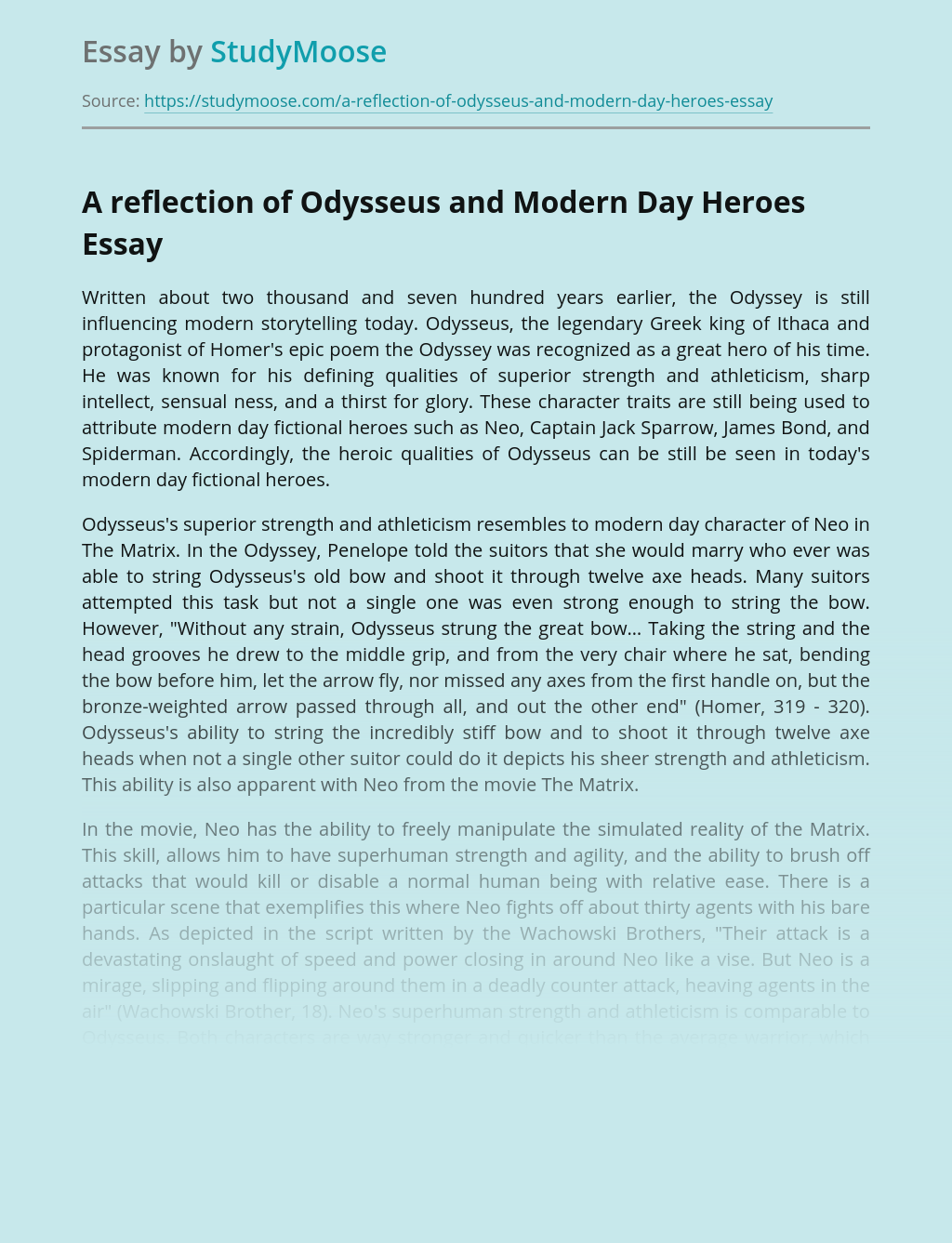 Turn in your highest-quality paper
Get a qualified writer to help you with
“ A reflection of Odysseus and Modern Day Heroes ”
Get high-quality paper
Helping students since 2015
Stay Safe, Stay Original