Modern Day Heroes: Who Are They?

Ladies and gentlemen, I am here today to convince you that we do not live in an unheroic age.

Compared to the ancient societies of our world, and indeed to those prior to the twentieth century, our society certainly lacks clear heroes and idols. However, I don’t believe that we live in an “unheroic age” – in fact, exactly the opposite: we are living in an age of more heroes than ever before. We may not live in an age where there are battles and wars in every country anymore – but that’s because we have advanced as a species.

Don't use plagiarized sources. Get your custom essay on
“ Modern Day Heroes: Who Are They? ”
Get custom paper
NEW! smart matching with writer

Heroes are everywhere, they vary depending on the type of person you are. A hero could be your parents, firefighter, president, artist etc. A hero comes in all shapes and sizes I feel and according to google the definition of a hero is “a person who is admired for their courage, outstanding achievements, or noble qualities”. So according to this, I feel that a hero can only be recognized by an individual’s perspective of a person for the fact that we cannot force another to admire someone because everybody has a different mindset, so everyone’s ideal hero is different.

I hope that as u finish this speech that u would be enlightened and shown how we do live in a world full of heroes.

Some would say that the world is an unheroic place because due to all the poverty that is going on now in places like the Democratic Republic of the Congo, Liberia, Zimbabwe, Eritrea, Somalia, Central African Republic, Niger, Malawi, and Afghanistan.

Yes, those places are poverty-stricken but it still does not mean that the world isn’t heroic. We have so many charities globally that fighting to stop poverty around the world, I don’t know about you, but I think that takes courage and is a noble quality. According to the Register of Charities, there are currently 166,081 main charities, and 22,980 subsidiary and group/constituent charities, making a total of 189,061 charities and is just the United Kingdom alone so if u multiply that by all the countries in Europe you get approximately 9,453,050 charities in Europe. That is amazing and you could imagine how many people are part of these charities.

Being a hero does not have to be as big as impacting a vast number of individuals, I feel the term hero has watered down throughout the years. Today I feel a hero is someone that inspires you to become someone good or bad. For example, according to Complex the 22-year-old, Bronx, New York rapper, whose real name is Artist Dubose listened to 50 Cent and Kanye West and became inspired to write raps about his rough and tumble Bronx neighborhood so because he was inspired by these rappers he ended having the courage to pursue a rap career and is now making millions even though people always said he couldn’t make it out of the “hood”.

Heroes could also be people that have overcome the same struggles that someone has had it going through presently like Nick Vujicic. Nick Vujicic was born with tetra-amelia syndrome, a rare disorder characterized by the absence of all four limbs. His videos on YouTube have inspired millions and millions of people with his message to love life and live without limits. He was tormented to such an extent that at the age of 10 he attempted suicide. After years of feeling alone and worthless, he had an epiphany one day while reading an article. He read about a disabled man who refused to let physical limitations dictate his life. At that moment, Nick says, he realized he had the ability to take control of his life. Instead of looking at everything he lacked, he decided to look at everything he could have. Now a famous author and international speaker, Nick inspires the world every day to live a life without limits. His message is amazing and life-changing. It is amazing how someone was able to inspire many individuals was only able to do this by being inspired by another individual this show that we do live in a heroic age that people are able to inspire each other and as long as people are able to be inspired, brave and noble we shall live in a heroic age.

We live in a heroic, a unique and wonderful age which has so much to offer and question to answer and the people to answer these questions I would consider them heroes.

Modern Day Heroes: Who Are They?. (2020, Sep 03). Retrieved from https://studymoose.com/modern-day-heroes-who-are-they-essay 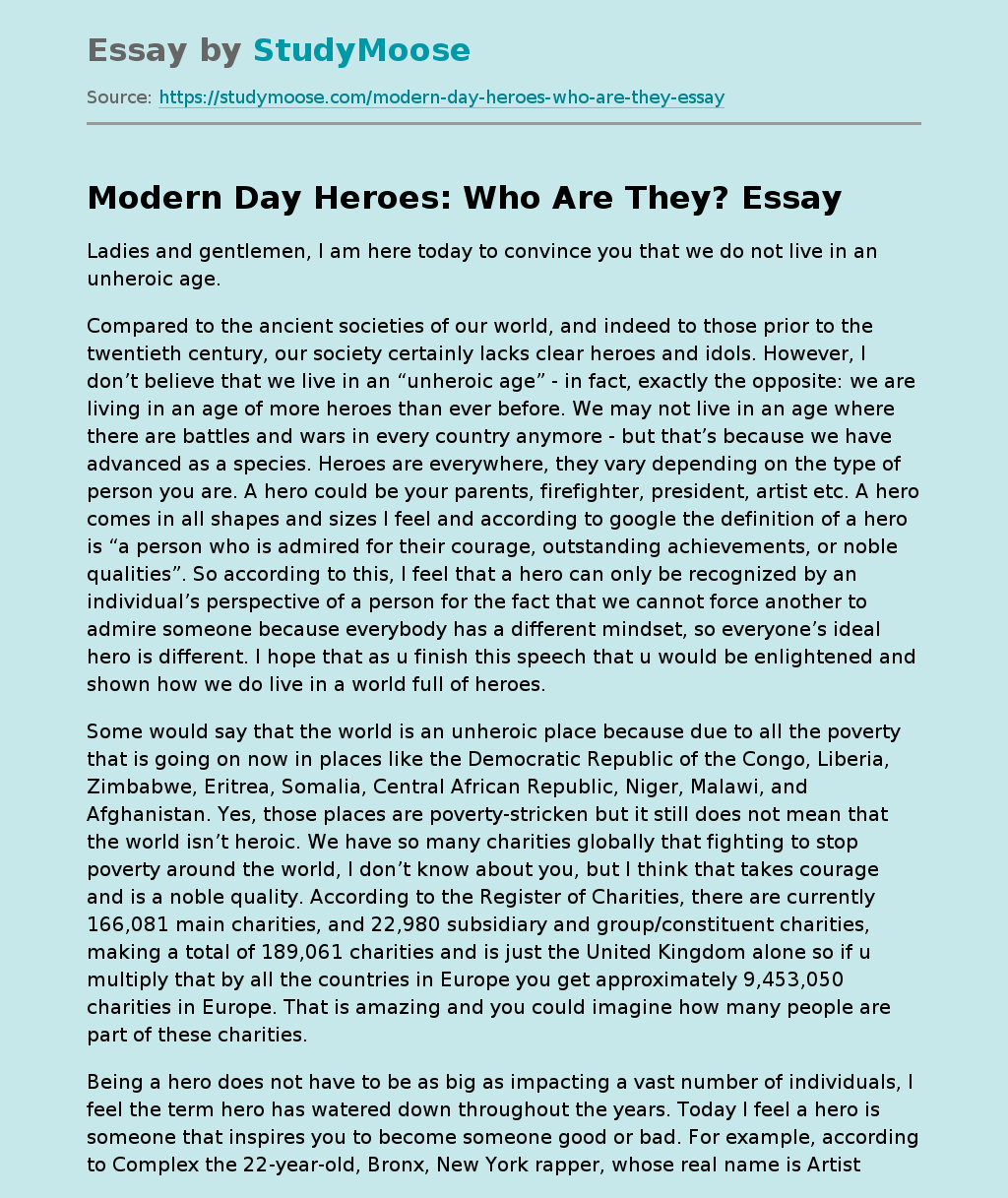