Epic and modern heroes have many similarities and differences. Their personalities, characteristics, and physical abilities vary. These similarities and differences make heroes unique and memorable for years to come. Epic heroes have a lot of personality. Most people would call them braggarts because they always boast about their adventures, treasures, or battles. Now, heroes are more like ordinary people. A firefighter is a modern day hero and could reside in the home next to you. Modern heroes are not out looking to accomplish great deeds.

Don't use plagiarized sources.
Get Your Custom Essay on Epic and Modern Heroes Just from $13,9/Page

Their actions are often spontaneously performed as where epic heroes look for people or villages in distress. Epic heroes also work for a reward, while most modern day heroes do not. The epic heroes’ characteristics closely resemble the modern hero. They both represent their society and civilization. Both have the capability of being defeated and even killed. They also must posses the emotion of fear. One difference in the characteristics of an epic and modern hero is their hunger for fame.

Modern heroes accomplish great deeds because it either feels good to them or it is their job. One of the biggest differences between epic and modern heroes consists of their physical abilities. Epic heroes can have incomparable strength such as Beowulf. Beowulf was able to fight a monster, which lifted thirty grown men with his bare hand. He was also able to hold his breath for hours under water. Modern heroes resemble everyone else in their civilization. Heroes, these days, do not have to rely on the use physical capabilities to accomplish great deeds.

They are able to use their heads. They help others in need by organizing food drives, teaching farming methods to those who have trouble growing crops, and building shelters for homeless orphans. These are very respectable accomplishments of a modern day hero. The depiction of a hero has changed over the course of history. The characteristics, personality and physical capabilities greatly differ from the epic heroes to the heroes of the modern day. These traits allow heroes to be remembered of many years to come. 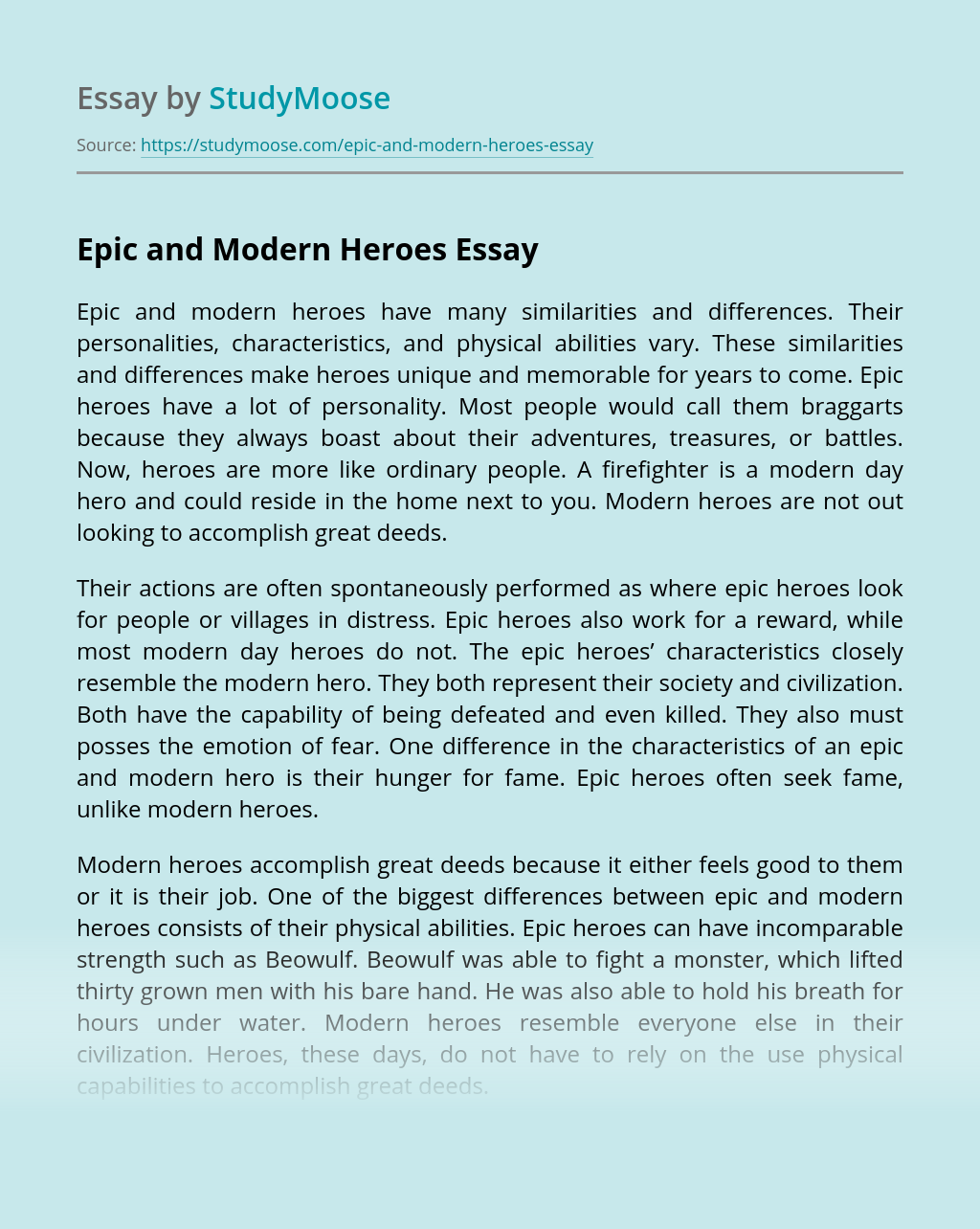 Even the darkest night will end and the sun will rise. A revival of a classic written by Victor Hugo in the year 1862, adapted into a musical during the late 19th century, Le Miserables has yet again made a comeback as a musical film directed by Tom Cooper in the year 2012. The film... VIEW ESSAY

Robert Frost’s poem “The Road Not Taken” described by John Savoie as the “most American of poems” (Savoie, 2004, p.5), evoked different reactions from lay men and professionals alike. It has lead one writer to another to delve into the real meaning behind the poem. In this paper, the thesis would show that the poem... VIEW ESSAY

What do you think are the prime advantages and disadvantages of National City Corporation’s virtual tryouts? The advantages of using virtual tryouts are competitive edge against other companies. Allows them to pick candidates better suited for their work environment, allows candidates the knowledge that they are applying for a company that is at the cutting... VIEW ESSAY

View sample
Summary of The Accounting Standards Setting Process in the U.S.: Examination of the SEC-FASB Relationship

The question arises, how much power and influence does the SEC have over the FASB pertaining to setting accounting standards? Do the SEC and FASB work together as believed by the authors of The Accounting Standards Setting Process in the U.S.: Examinations of the SEC-FASB Relationship ? Or is the FASB in complete control of... VIEW ESSAY

View sample
Assessing The Occupational Competence in the Work Enviroment

C. In carrying out assessment of occupational competence, I would ask myself: How effective was my assessment and feedback? Was there anything I didn’t anticipate? How did I deal with it? What went well? What could I improve? If I had to change anything what would I do differently? I would ask the learner what... VIEW ESSAY