Talking about fate as about the only force that determines the human actions means to refer to a term that vexes and limits the human condition. The fate is given by the reaction of gods, but it is placed above people and gods.

The gods participate to the human existence to help or to oppress them. The success doesn’t depend on the individual value, but on the support provided by Immortals, without any justification. Zeus is presented as the incarnation of a supreme force, but with an arbitrary will, whose manifestations can’t be predicted or avoided.

Don't use plagiarized sources. Get your custom essay on
“ Fate in Homer’s Iliad ”
Get custom paper
NEW! smart matching with writer

The good and bad are related to criteria that have nothing to do with virtue or justice.

The two Homeric poems Iliad and Odyssey are perfect mirrors of the Greek culture. For centuries they have fed the Greek spirit and remained models imitated by the art works and the everyday ones. Ulysses and Achilles, who dominate throw their extraordinary personality, are models of the Greek hero, Ulysses being presented as an Apollonian hero and Achilles as a Dionysian hero.

The fate is present in Iliad as an answer to the existence and role of man, being responsible for his actions and decisions. It also determines the life of Gods, although they don’t have a destiny and they can not be judged for the consequences of their acts, as they are immortals.

“But once they reached the springs for the fourth time, Then Father Zeus held out his sacred golden scales:  In them he placed two fates of death that lays men low – One for Achilles, one for Hector breaker of horses – And gripping the beam mid-haft the Father raised it high And down went Hector’s day of doom, dragging him down To the strong House of Death.

The Homeric epics are inspired by a series of mythical and historical events, known all around the world. Iliad narrates.

In the Book 1, Thetis, the mother of Achilles, tells him: “Doomed to a short life, you have so little time. / and not only short, now, but filled with heartbreak too, / more than all other men alive – doomed twice over”  (Homer. The Iliad. Richmond Lattimore, translator. Chicago: University of Chicago Press (1951), 1. 496-98).

The Trojan War was a military conflict from antiquity, between the city of Troy and Achaeans. According to Greek mythology, the war started because Paris, the prince of Troy kidnapped Elena, Menelaus’ wife, the king of Sparta. This conflict is one of the most important events in the cycle of Greek myths, including the great Antique epic poems, Iliad and Odyssey, both written by Homer.

The sky and the Earth are united by Zeus throw rain (Zeus ombrios, hyetios, ikma, ios), wind (Zeus urios, euanemos), thunder (Zeus astrapaios, bronton, keraunos), signs and oracles that transmit to the immortals from Erath the messages sent by the heavenly gods. The immortality, which is a precise boundary between humans and gods, in the eyes of Greeks, it represents an essential feature of Divine.

In Homeric epics, especially in the Iliad, it is presented a merge between the world of gods and the world of humans. Each divinity acquired its own physiognomy, characterized by specific attributes. The relations between gods and humans, as they have been presented by Homer, raise numerous issues regarding the influence of Gods on the life on Earth, even on the psychology of heroes.

Homer hates the war but recognizes its power. Achilles does not come out in the battlefield until Patroclus, his most beloved friend, was killed. In that moment of blind rage, Achilles has fulfilled fault, refusing Hector to pass throw the usual rituals, to reach on the land of Hades. In fact, from the beginning to the end, it can be noticed the power of fate. Paris kidnaps Elena, all the Trojans are affected by his act, but none of them try to send her back to Menelaus and all approve the beginning of the war.

“Sing, goddess, the rage of Achilles the son of Peleus,

The destructive rage that sent countless ills on the Achaeans…” (Iliad, Book 1)

Being presumptuous, Agamemnon insists to take Briseis, a slave taken from the temple of Apollo, despite the heavy words and threats of Achilles. Regarding Achilles, it was not about fault, but about a prediction, as he was meant to choose: either he wouldn’t have known the greatness of conquering such a fortress and his name wouldn’t have survived  in time, either he wouldn’t gone to Troy and would have died of natural death.

Achilles, obviously refused the anonymity and died, but not before struggling with the god of a river, who was mad because of the various crimes committed by the hero in its waters. He managed to escape from this challenge, as he was helped by gods.

The fate is also present in Athena’s words, when she addresses to Achilles: Yes!  We will save your life – this time too – Master, mighty Achilles!  But the day of death Already hovers near, and we are not to blame

But a great god is and the strong force of fate. (19 . 483-86) The men’s destiny is responsible for his death, and not the other men. “The son of a great man, the mother who gave me life a deathless goddess.  But even for me, I tell you, death and the strong force of fate are waiting. There will come a dawn or sunset or high noon when a man will take my life in battle too – flinging a spear perhaps or whipping a deadly arrow off his bow.  “

It is not about a clear hierarchy of the cosmic powers, as the Gods and fate are often perceived by the characters as being the same. A personified Fate or Fury answers to unclear questions about the human nature and inexplicable events.

Iliad has a consistent subject, based on Achilles wrath. In the center of conflict, shines the absolute hero, the ruthless winner, violent and courageous, but also the sacrificed hero, who will spread death around him. The name of Achilles is uttered by all soldiers, and Peleus, the father of Achilles, is desired and regretted by all. Achilles wanted to die in the war, but by an irony, he is killed by one of the most sympathetic of the heroes of Homer, a war novice- Paris, the shame and curse of Trojans. 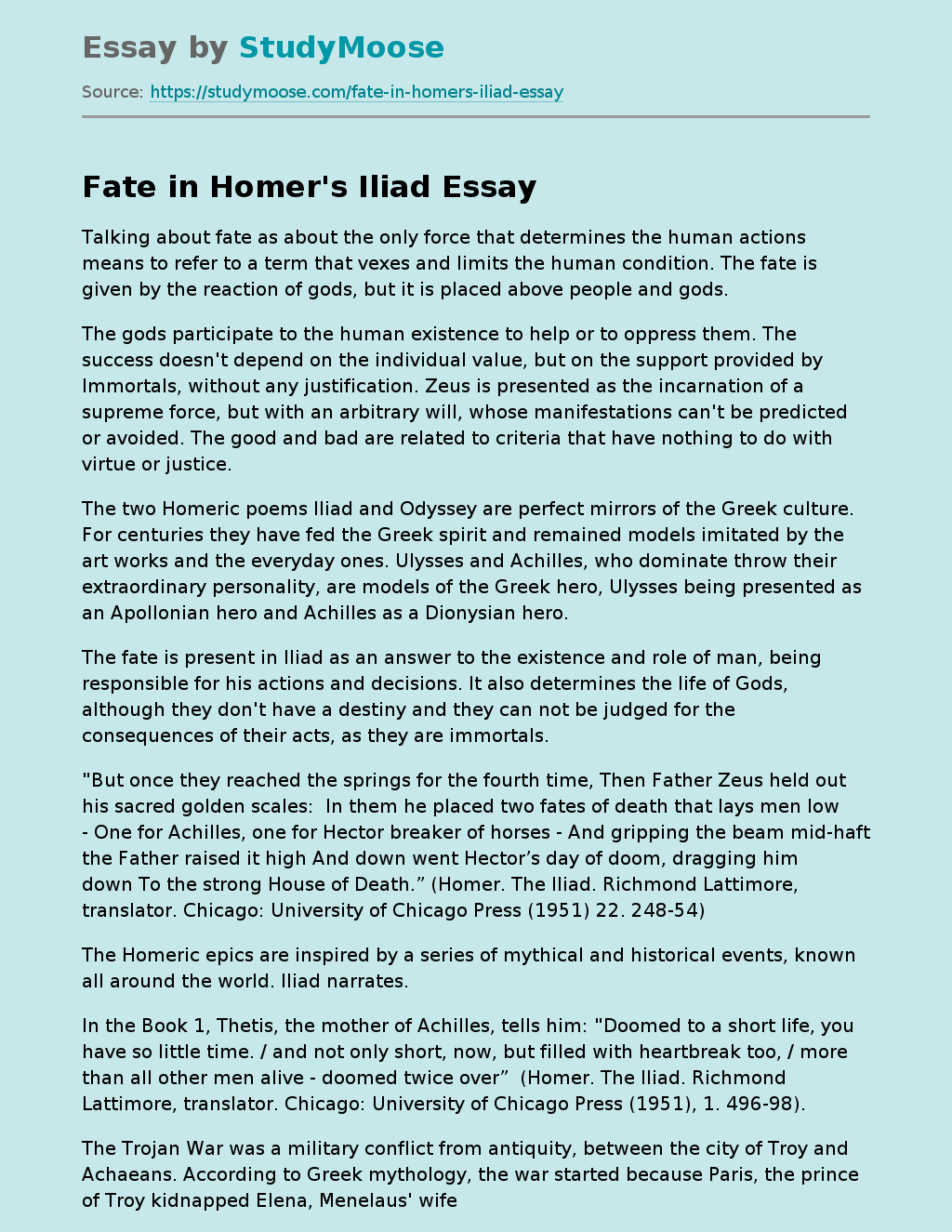