It is not unknown that people look up to heroes and even try to emulate their actions; however, there is a relevant question that needs to be asked in order to facilitate a thorough understanding of what differentiates a hero—from someone who is merely fighting for himself. According to Aristotle’s Politics (9), “[… ] he who is unable to live in society, or who has no need because he is sufficient for himself, must either be a beast or a god: he is no part of a state.

Don't use plagiarized sources. Get your custom essay on
“ Achilles and Odysseus ”
Get custom paper
NEW! smart matching with writer

” While it may not seem to be rather obvious, but this particular line in Aristotle’s Politics tacitly implies that men who possess extraordinary characteristics and goals, such as heroes can be compared to either gods or wild animals. Since they are heroes, they do not need the help of other individuals (self-sufficient) and are detached from their community, they are not different from wild animals.

While it can be said that the epic heroes discussed in this particular critique have contributed to their respective time and place, it is necessary to look at how they were able to contribute, and whether such contribution, indeed, was something deserving of praise and adoration.

If one is to analyze Achilles and Odysseus in light of Aristotle’s philosophy, it would be realized that there is much more to a hero than just defeating his adversary. There is a difference with what makes a person a hero, a god, and a beast.

It is also seen in the Iliad and the Odyssey that “while Achilles achieves his epic supremacy as a warrior, Odysseus achieves his own kind of epic supremacy in an alternative way, as a master of crafty stratagems and cunning intelligence” (Foley 79). If one is to take Aristotle’s line regarding heroes as wild animals into consideration, it will be seen that Aristotle may actually have a logical point, particularly owing to the fact that Achilles’ anger was the main cause of the countless problems the Greeks encountered as they pursued their war with the Trojans (Foley 79).

According to Robin Sowerby (247), although Achilles is considered an epic hero, this does not remove the fact that he had been a compulsive hero, who had been unable to control his anger, thus, her endangered not only himself, but also his loved ones and his own country. His stubborn attitude in doing what he wanted resulted, then, in deaths and further suffering.

It is not unknown that Achilles had too much pride, horrible temper, and resentment which was boiling deep within him, all of which may have clouded his judgment (Sowerby 247), thus, hindering him from properly functioning as a part of a team during the war. He fought for himself and he fought on his own; however, “it is by no means easy for one man to superintend many things; he will have to appoint a number of subordinates” (Aristotle 74) in order to get a job done properly instead of doing everything on his own.

Needless to say, Achilles’ irrationality, temper, and desire to defeat his adversary alone were his weaknesses. If one is to analyze Achilles’ characteristics in Aristotle’s point of view, these would be the reasons to consider this hero as either a beast or a god; although it would seem as if Aristotle would be leaning toward the description that Achilles was a beast, rather than a god.

It must be understood that to Aristotle, everyone has their own position in a state, in a community, and if an individual chooses to not act on his duty—and prefer to be disagreeable and stubborn like Achilles instead of working with other individuals toward a common goal of the community, then he is not part of that community, and therefore, he must either be a beast or a god. But if one is to analyze Achilles in light of Aristotle’s discussion, it is only logical to say that Achilles had been a hero who was more of a beast than a god.

According to Aristotle (73), “passion perverts the minds of rulers, even when they are the best of men. ” This statement is particularly true, if one carefully analyzes Achilles’ character. His temper and his pride has made him do horrible mistakes that cannot be undone. His passion, his will to become a warrior, to prove that he was strong and he can do everything on his own without the help of other individuals, eventually corrupted him and resulted in tragedy.

Odysseus, on the other hand, is the polar opposite of Achilles. According to Douglas Olson’s Blood and Iron: Stories and Storytelling in Homer’s Odyssey (52), although he is prominently known as the man who tried to save his fellowmen and dismally failed and returned home empty-handed, the fault must not be attributed to him. It is known that the sailors he wanted to bring back to their homes perished during their journey home—but not because Odysseus was a bad leader and he was unable to handle the responsibility.

It has to be clear that their own demise was their own fault; their wrongdoings had to be punished. This was an occurring theme in the Odyssey and must not be mistaken for a failure of this particular Greek hero. In analysis, if Odysseus were an irresponsible leader as people make him out to be due to the deaths of the sailors, then he would not be able to lead his country properly as a good king. In fact, before the event that they had to travel by sea, Odysseus had proven to be a very responsible leader to his crew.

When his men were hungry, instead of sending them out to hunt while they were tired, he let them sleep and did the hunt himself for his men. He was able to kill a stag and carried it to their camp in order for his men to be able to eat a feast the next day (McCaughrean 32). While it seems as if he was like Achilles who wanted to do things on his own, Odysseus was different in the sense that he wanted to look out for them, and believed that they deserved to rest their tired bodies, so he let them, and hunted food for them.

He was merely acting the way a leader should towards his followers, compared to Achilles who wanted to work alone and often subjected people around him to irrational bursts of temper. In Odysseus’ tale, there was no Hector to be defeated—only sailors who are disobedient and Penelope’s (Odysseus’ wife) suitors who flocked around her when they presumed that Odysseus was already dead. Although Odysseus had to be cunning in order to overcome struggles, his tale was more of a fight with principles and morals rather than a fight with swords and shields.

Of course, it is largely debatable as to whether which is the far more difficult battle, but regardless of which is more difficult, the point is that unlike Achilles who preferred to work alone and refused to be a good leader, Odysseus was up to the job and understood what it meant to be a leader to his people. Odysseus cannot be deemed a god, for he knew what it was to live in a society; he knew that he needed other people despite his qualities as a hero, he was willing to lead his people, as well as fight and sacrifice for them.

Summary As seen in the aforementioned discussion, Achilles and Odysseus had their own ways to fight their battles. While it is given that arguments will arise to whether such epic heroes have done the appropriate means to win their battles, it cannot be denied that Aristotle made sense when he stated that “desire is a wild beast” (Aristotle 73). It may not seem much to a lot of individuals but such a simple phrase contains a large truth that cannot be avoided.

Individuals who let themselves be absorbed by their desires often find themselves weak in creating moral decisions, for desire often tempts man into doing what he wants and not what he should. As seen in the comparison between Achilles and Odysseus, one must ultimately ask: Who is the better hero? Who is the beast? Is there a god? There is Achilles who fought and won for himself, for his desire to kill his adversary, not for his people, whereas there is Odysseus, who failed to bring his men home, but he tried to lead them the best way he could.

While Achilles was a beast, it cannot be said that Odysseus was a god—for Aristotle’s statement was undeniable: in order to be part of a society, must one know one’s place. It is not about self-sufficiency, it was about helping each other and knowing which position to take and fill in. A real hero, apparently, is not the one who cannot be likened to a god, for he is not self-sufficient, and he needed others; neither can the real hero be likened to a beast, for he does not merely fight for himself—he fights for others.

The hero is the one who tried, failed, and yet, was still able to lead his people onward. 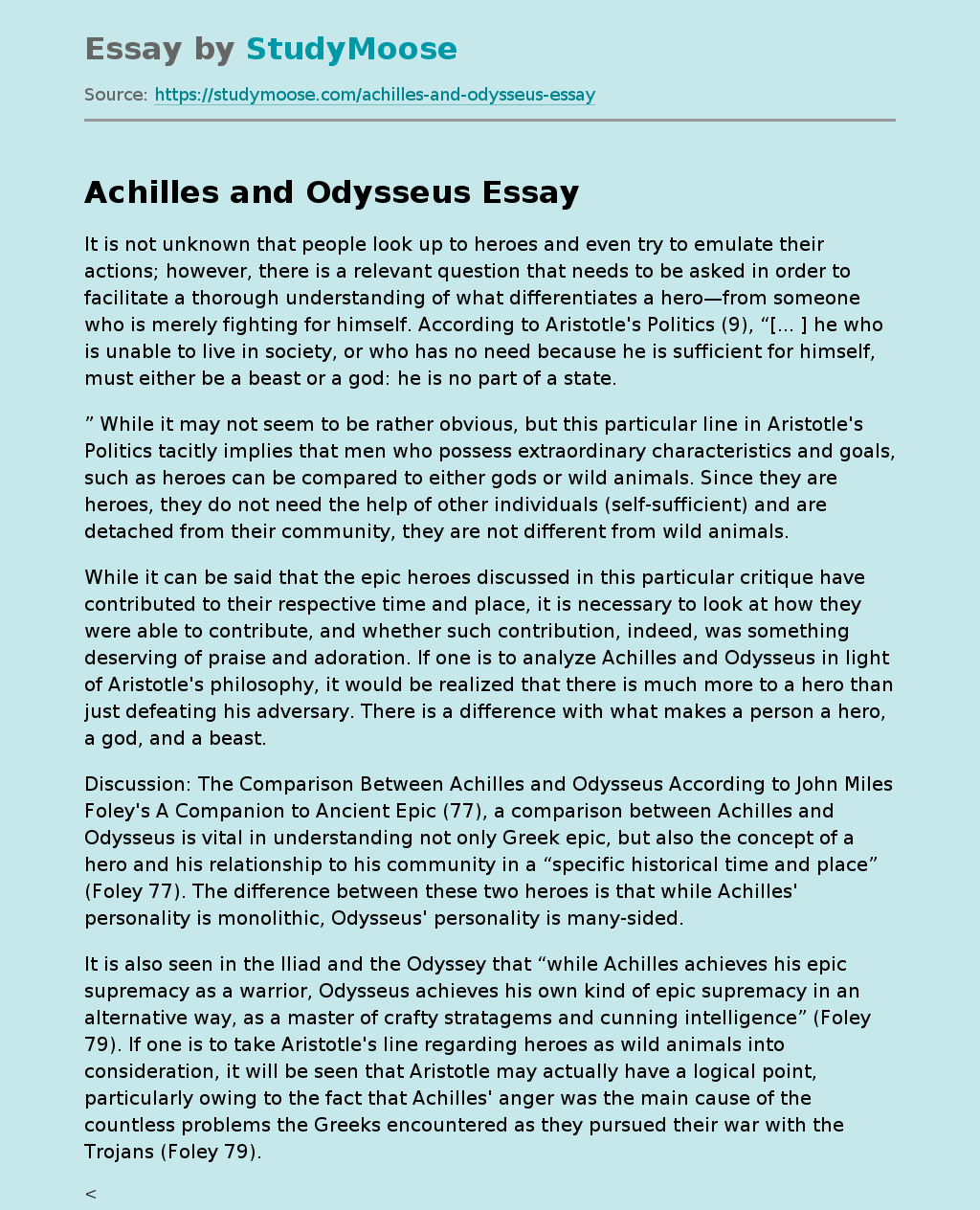