The Heroic Journey of Odysseus

In almost all of the stories that have been written, there is a journey that the character undertakes to become whole and balanced, also known as the heroic journey. In the first stage of the journey, the departure, the hero leaves their known world and begins their adventure. After the hero undergoes the departure, they then move on to the next stage, the initiation, where they are put through tests and venture into the world of hero or magic or the previously unknown.

Don't use plagiarized sources. Get your custom essay on
“ The Heroic Journey of Odysseus ”
Get custom paper
NEW! smart matching with writer

The third and final stage is that of the return, where the hero must return back to his home. A perfect example of someone that underwent the heroic journey is Odysseus from the epic poem, The Odyssey by Homer because he had undergone a journey that included a departure, initiation, and return. Indications of Odysseus’ departure are his call to adventure and his crossing of the first threshold.

Odysseus’ call to adventure is his desire to go back to his family in Ithaca after being sent to Troy to fight in the Trojan War (Hamilton 260).

During the call to adventure, something is usually taken away from the hero’s family, society, or culture. Although Odysseus tries to trick his way out of going to Troy, his plan did not work and he is forced to go with the fleet, leaving his family in Ithaca. Odysseus crossed the first threshold when he devised a witty plan to get him and his men out of the Cyclops, Polyphemus’ cave (Hamilton 108).

During the crossing of the first threshold, the hero has left their known world and moved into a place that is totally unknown to them and sometimes they have to trick their way through this rough spot. Odysseus told each man to choose out three thick-fleeced rams and bind them together with strong strips of bark and hind underneath them and wait until Polyphemus sends them out to pasture. Odysseus’ call to adventure and his crossing of the first threshold are evidence that he had gone through a departure.

As Odysseus went through his second stage, the initiation, he is tested with the road of trials and the women as temptress. Odysseus goes through his road of trials when he is at the realm of Circe on the island of Aeaea (Hamilton 305). The road of trials is when the hero is beset by a series of tests, ordeals, or challenges, and is often aided by a supernatural aid or by an amulet or other magical device. In the realm of Circe, a group of Odysseus’ men were turned into swine, but luckily Hermes gave Odysseus an herb that would make him immune to her powers and because of his immunity, she fell in love with him and began to help them.

Odysseus comes across his women as temptress at the nymph, Calypso’s island, where he was a virtual prisoner (Hamilton 295). A women as temptress is someone or something that distracts the hero from his journey, but the hero must conquer, ignore, or fool the temptress. Calypso loved Odysseus and wanted to keep him forever, so she overwhelmed him with kindness, but everyday Odysseus ignore her and go on the seashore and long for his home, his wife, and his son. Odysseus’ encounters with the road of trials and the women as temptress indicate that he had gone through the initiation stage.

Two indications of Odysseus’ return were the magic flight and the freedom to live. Odysseus’ magic flight is when Athena and the other gods, besides Poseidon, help him get home to his family (Hamilton 295). If the hero has the permission of the gods to return, and he also has their aid, then the magic flight can be easy, if not, the flight is often a chase or a difficult journey in which magic plays an important role. While Odysseus was trying to find his way back home, Athena began to feel sorry for him and brought his sad story to the other gods, where they all decided that they would contrive a way to bring him home. During the freedom to live phase, Odysseus finally got reunited with his family and Ithaca, and every heart was glad (Hamilton 318). The freedom to live is when the hero lives or enables others to live happily ever after. When Odysseus finally sets foot on his homeland, he and his son, Telemachus, rid of the suitors and together, with Penelope, they lived happily ever after. The magic flight and the freedom to live are two signs that Odysseus had indeed gone through the final stage.

The heroic journey, a quest that a character undertakes to become whole and balanced, is in almost all of the stories that were ever written. The departure is the first stage of the journey where the hero leaves their known world and begins their adventure. After the hero undergoes the departure, they then move on to the initiation, where they are put through tests and they venture into the world of hero or magic or the previously unknown. The third and final stage is that of the return, where the hero returns back to his home and family. Odysseus’ journey from the epic poem, The Odyssey by Homer, is a prime example of a heroic journey because Odysseus had undergone the three stages of the journey; the departure, initiation, and return.

The Heroic Journey of Odysseus. (2016, Oct 11). Retrieved from https://studymoose.com/the-heroic-journey-of-odysseus-essay 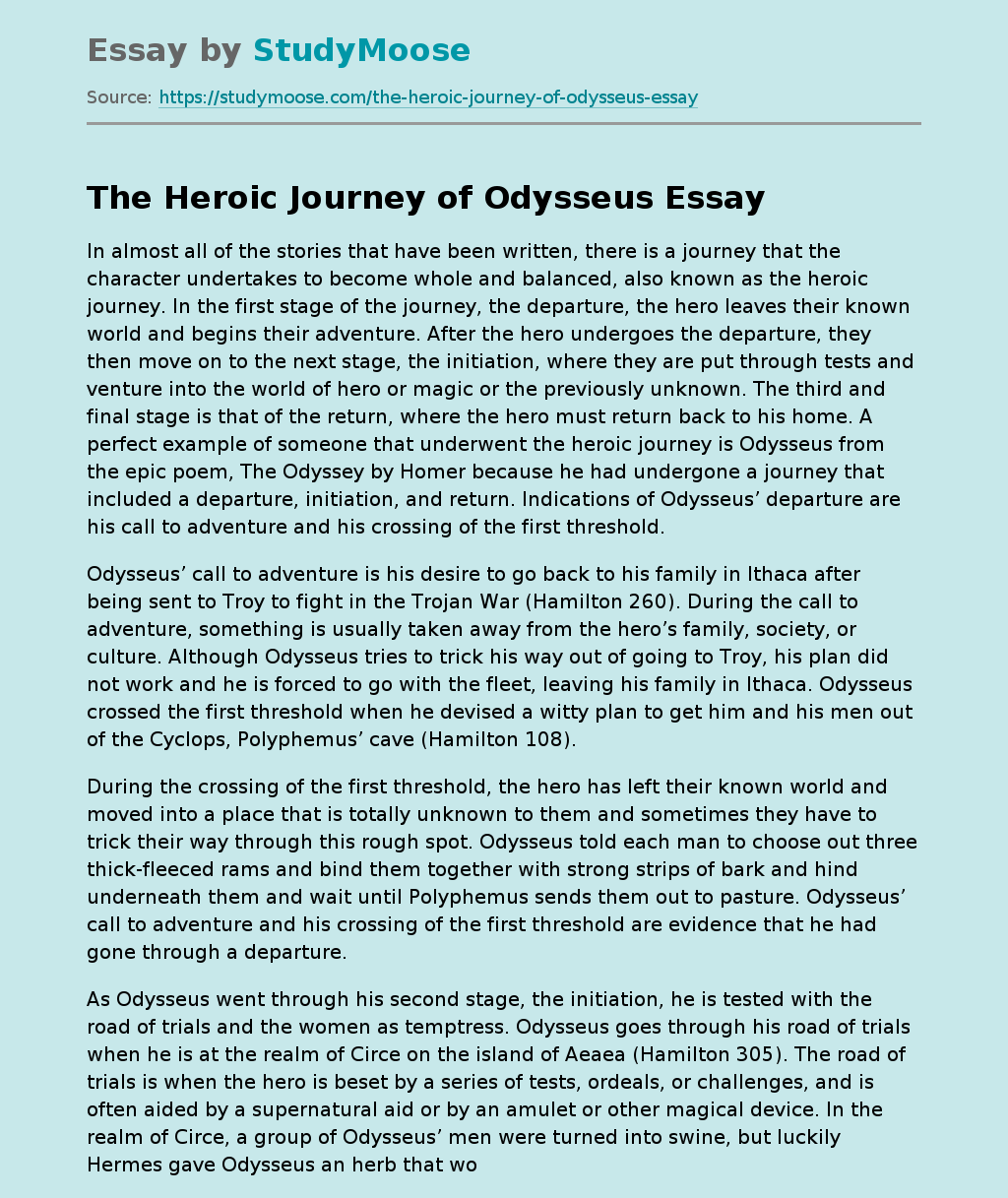