The Matrix in relation to the clasical hero's journey

In the film “The Matix” the main character Neo is taken on a journey that by all acounts seems to fit the model of the classical “hero’s journey” pattern. From his call to adventure by way of Morpheus, to the road of trials that included his meeting with the Oracle, he experienced a very text book style adventure.

The first step of a hero’s journey is the departure, which has several underlying topics such as the call to adventure, the refusal of the call, the supernatural aid, the crossing of the first threshold, and the belly of the whale, which means that the character is unsure of his quest.

Turn in your highest-quality paper
Get a qualified writer to help you with
“ The Matrix in relation to the clasical hero’s journey ”
Get high-quality paper
NEW! AI matching with writer

Neo’s call to adventure comes in the form of Morpheus, the philosophical “father figure” that leads Neo on his journey by first contacting him. He tells Neo about the agents coming for him and how to evade them. Next, Neo refuses the call when he refuses to walk to the next ledge on the outside of the building, therefore being apprehended by the agents and interrogated.

His supernatural aid comes in the form of Trinity, who calls him on the phone, picks him up, and sucks a the most literal image of a wire tap or “bug” out of him. Neo officially crosses the threshold and enters the world of the matrix when he chooses to take the red pill from Morpheus. Finally, he has the “belly of the whale” syndrome when everything he has ever known, his logic, is literally ripped apart with his departure from the matrix and into the doomsday-ish world, as Morpheus exposes the lies that are the matix.

The next step in the hero’s journey is the road of trials. This step includes the meeting with a goddess, a woman as an interest, atonement with the father figure, apotheosis, which means he felt a power, and an ultimate boon, also known as getting what he had sought after.

Neo’s road of trials began as he met the “goddess.” The goddess comes in the form of the oracle who contrasts Morpheus’s belief that Neo is “the one” by telling him otherwise. Yet Neo keeps this to himself and this prophecy causing him to save Morpheus who attempted to sacrafice himself due to his belief that Neo was “the one.” The whole movie, Neo has his eye on Trinity, who is his women of interest. Atonement with the father comes early in the
movie when Morpheus has the memorable chat with Neo that involves the blue and red pills. Neo’s apotheosis period comes after he completes his basic training and feels powerful, almost arrogant in a sense. Neo reaches his ultimate boon after he defeats an Agent Smith in the train station, therefore proving his power, and furthering peoples belief that he is “the one.”

The final stage of the journey is the return. In “The Matrix,” Neo is forever stranded in the “real” world and can never return to the matix in the way he previously lived there. Therefore many of the underlying subjects of the return are irrelevant, such as the refusal to return, the crossing of the return threshold, and the master of two worlds. But, he still goes through two stages, those being the magic flight, and the freedom to live. The magic flight would be the fight with Agent Smith, which smbolized the classical battle of good and evil, in this case, of freedom and mind control under the matrix. And finally the other one being the freedom to live. Neo now has the freedom to live, literally. He has evaded the agents, and now can live free of the mind control of the matrix. But, he still has to deal with the virtual nothingness that he lives in now, with the exception of Zion, which he still has not traveled to yet.

To conclude, Neo’s journey to free his mind from the matrix and stay alive fits by most means all of the different categories that are in the hero’s journey.

The Matrix in relation to the clasical hero's journey. (2016, Jul 16). Retrieved from https://studymoose.com/the-matrix-in-relation-to-the-clasical-heros-journey-essay 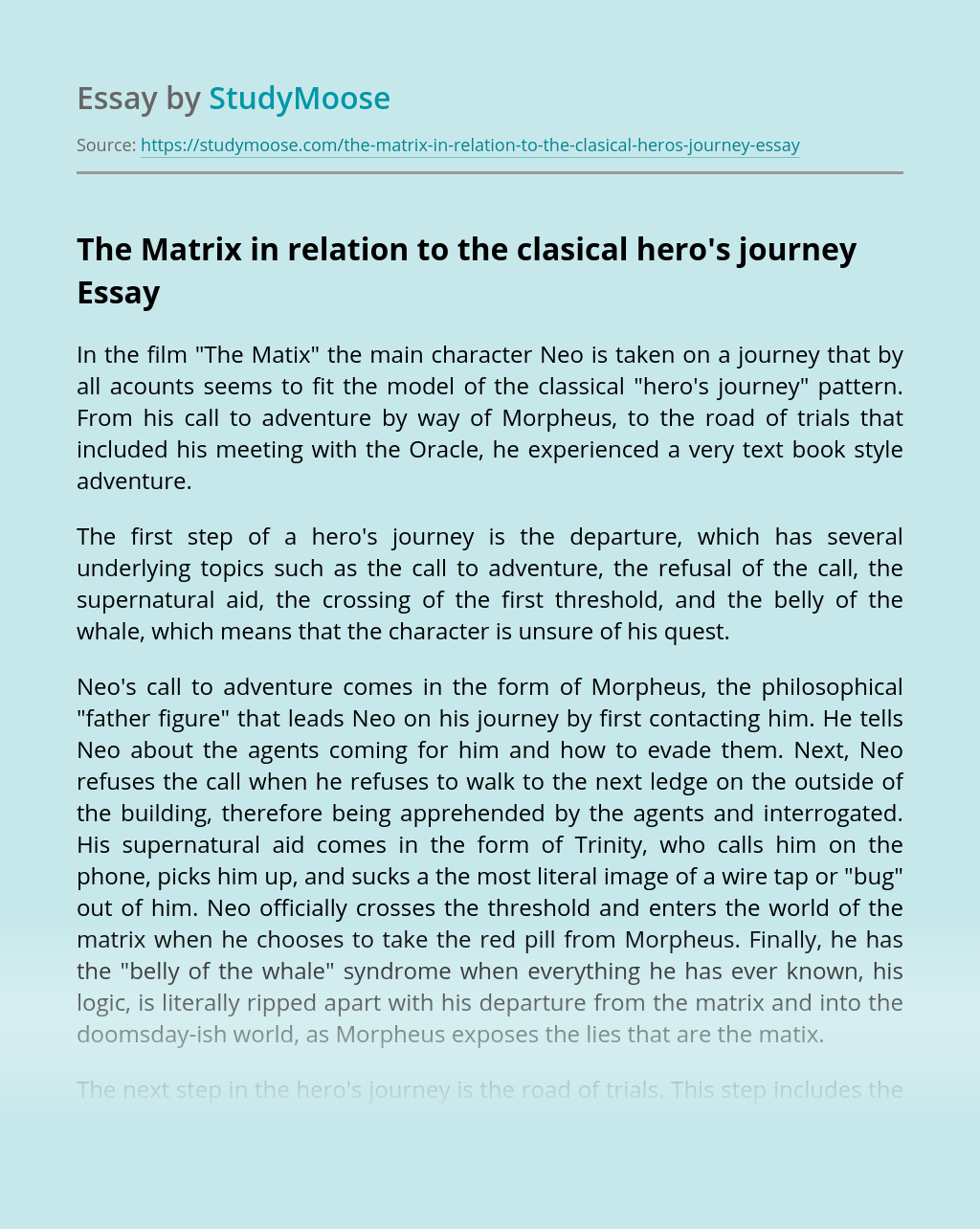 Turn in your highest-quality paper
Get a qualified writer to help you with
“ The Matrix in relation to the clasical hero’s journey ”
Get high-quality paper
Helping students since 2015
Stay Safe, Stay Original