Idea of Hero in Cue for Treason

A hero is someone idolized by others for their outstanding achievements and qualities. Everyone has their own meanings of the word hero; some people might think a hero is someone who wears costumes and fights crime where as someone else might think of a hero as someone who fights for a country for example, a soldier. Peter Brownrigg, of the novel Cue for Treason by Geoffrey Trease is the most heroic characters in my opinion.

His persistent, selfless, and courageous personality exemplified their heroism. These personality traits make Peter the most heroic characters of Cue for Treason.

It takes persistence for a hero to overcome any unexpected difficulties presented to them. Near the end of Cue for Treason, Peter tried his best to sabotage Sir Philip Morton’s plan to assassinate the Queen. This is one piece of evidence where Peter’s heroic qualities is shown because he fought against multiple conspirators, but he has not given up once.

. Another example of where Peter’s persistence was shown is when he was hiding from Sir Philip Morton inside the chest at the theatre. “It was hot in the chest, but I was afraid to come out. I could never be sure, even when there was silence around me…” (Trease, 48-49).

In this scenario, Peter also portrayed his persistent characteristics by hiding in the hot chest in fear of being found by Sir Philip Morton. This once again portrayed that Peter was heroic because he knew he had to stay hidden in order to protect the identities of the people involved in the tearing down of Sir Philip Morton’s wall.

Peter’s persistence was shown once again when he was swimming through the waters of Ullswater. This quote from Cue for Treason also supports the fact that he is persistent, heroic and not selfish.

I mustn’t give up. I mustn’t give up… Everything depended on my reaching that thin line of gray shingle, that fringe of oaks and pines. If I gave up now, and let myself slip down into the sweet peace of green water, the Queen would be murdered and the kingdom thrown into anarchy. Thousands of Englishmen would die in the quarrel… That was what kept me swimming. It wasn’t just the life of an old lady with a crown. It was for all of us (Trease 201-202).

Selflessness is the trait that portrays heroes and allow heroes to put others before themselves. This quote portrayed that Peter is not selfish because he knew many lives were at stake and that he could not give up for the sake of those lives. Peter left his house willingly to protect his family, friends, and neighbours from Sir Philip Morton. This made him heroic and not selfish because he was risking his own life, but at the same moment he was protecting the lives of others whom which he cares for. Later on, Peter grew to care for his companion Kit.

“I was in command for the moment. I’d have given a lot for Kit’s company, but I knew I wasn’t justified in taking her.” (Trease, 179). Peter decided not to let Kit go with him to search for Tom in the Peel tower. This was an example of his heroic and non selfish traits because he did not want to put Kit’s life in danger. Furthermore, Peter showed he was selfless when the Queen asked him what he wanted in return for having saved her life.

I looked at her. What did I want? … We have never sought wealth or honors-your true statesman will not take even a knighthood… ‘Your Majesty,’ I said, ‘there are some common which have been ours and our neighbors’ from time immemorial. Sir Philip stole them and enclosed them for himself. Will you hand them back to us and confirm us in possession of them forever?’ (Trease, 281)

Even when Peter was given the possibility of having anything he desired, Peter requested for the return of the land that Sir Philip Morton took away from his friends and family. This portrayed heroism and selflessness because Peter was thinking of his community and requested for the one thing that would benefit his whole community.

Heroes need courage to face the challenges that awaits them. Peter displays his courageous trait when he decides to leave Cumberland by himself. “I knew I couldn’t stand torture. If the law let them do that, even a little of it, I know I should blurt out the names of every man and boy who’d been there that night.” (Trease, 30). This demonstrates Peter’s courage because he knew that he had to leave to protect those he cared for. Another example of him being courageous was when he decided to enter the Peel tower without Kit’s company.

Tom had once told us that, if anything ever happened to him, we were to go to the nearest sheriff or magistrate and get him to send word… But the present business might be so urgent that this wouldn’t be sufficient… Could we afford to stand still and do nothing for so long? (Trease, 180) Peter thought about whether or not to follow Tom’s order. This showed Peter’s heroic qualities to shine because he had respect for higher authority, but he knew he had to not follow the instructions since lives were at stake.

In my opinion Peter Brownrigg is the most heroic character in Cue for Treason. His persistent personality helped him to endure the challenges of his journeys. Furthermore, he was not selfless for the happiness and safety of his family and friends. Lastly, he was courageous enough to perform risky actions. A hero is an individual distinguished for their exceptional abilities and accomplishments.

Idea of Hero in Cue for Treason. (2016, Oct 03). Retrieved from https://studymoose.com/idea-of-hero-in-cue-for-treason-essay 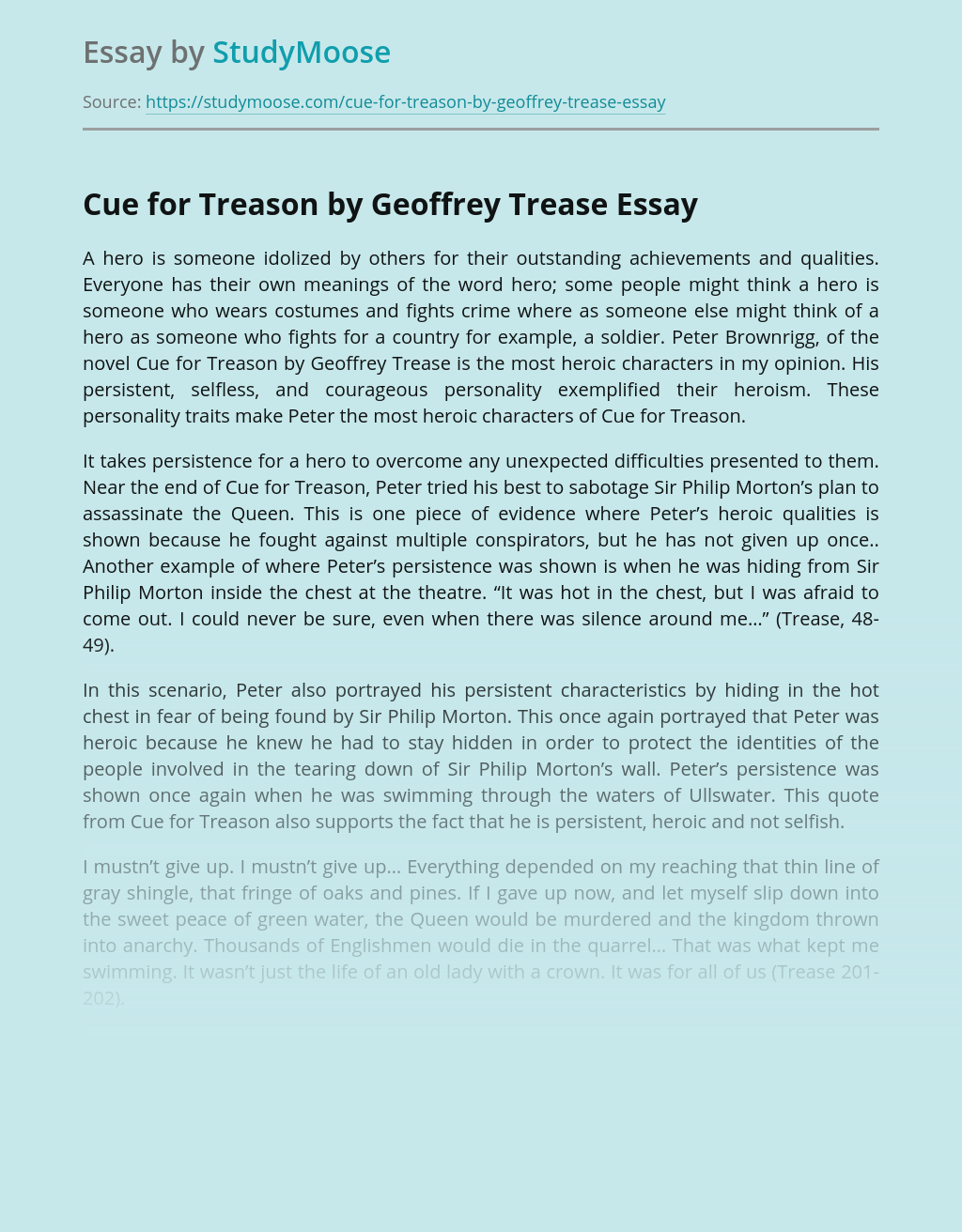 ?A Discussion of Heroism in Literature and Film

Role and evolution of the hero in literature

Rate this post ” If Hero means sincere man, why may not everyone of us be a Hero?” (Carlyle, qtd. in Hoyt’ s New Cyclopedia of Practical Quotations). This statement makes heroism seem simple, but is being sincere enough to make you a hero? In modern society, the answer is likely to be yes, but...

Rate this post What is a hero? No words can truly define what a hero is. A hero can be many different things to different people. Webster defines a hero as “a mythological or legendary figure often of divine descent endowed with great strength or ability.” It is known to this day and age that...

Rate this post When the word “hero” comes to mind, people generally think of Superman, a military person who was in a war, or a person who has saved someone’s life. Hero headlines may read “Hero neighbor saves 7-year old girl who fell from third story window in Coney Island” (Robinson, A. & Paddock, B.,...

Rate this post In paralyzing situations such as witnessing a crime and saving a life, ordinary people often perform heroic actions far beyond their normal capabilities. To begin with, the action doesn’t have to be the superhero stereotypical story. “When we quit thinking primarily about ourselves and our own self-preservation, we undergo a truly heroic...

Rate this post This war novel, The Red Badge of Courage, is about the growth of a young man, Henry Fleming, in the civil war; his physical and psychological growth. As a young and inexperienced enlister, it did not take long for Henry to realize the true horrors of war. The author, Stephen Crane, provides...

A Comparison of the Acts of Courage, Bravery and Heroism Between the Characters of Julie, Maddie and Anna Engel in Elizabeth Wein's Code Name Verity

Rate this post Being a book about the Second World War, it is only fitting that the story in Code Name Verity is characterized with acts of courage, bravery and heroism. Many characters in the book have been the most prolific in creating the accounts of courage. This paper will however focus on three of...

Rate this post As Maya Angelou once said, “Courage is the most important of all the virtues because, without courage, you can’t practice any other virtue consistently. You can practice any virtue erratically but nothing consistently.” Courage is very similar to the idea of heroism since they both mean bravery and valor. Harper Lee’s To...