Is Macbeth a hero or villain?

The play ‘Macbeth’ by William Shakespeare is about a fascinating character known as Macbeth. Do we consider him a hero or a villain? There has been much questioning over this. As the story goes on, Macbeth went down many changed turns, some for good, and some for bad. Macbeth goes from a nice hero to a mean villain all in a small period of time. Many actions made Macbeth into a good person at the opening of the play, which gave him titles of bravery, loyalty, and a good reputation.

+84 relevant experts are online
Hire writer
Don't use plagiarized sources. Get your custom essay on
“ Is Macbeth a hero or villain? ”
Get custom paper
NEW! smart matching with writer

Then several actions made Macbeth appear evil such as committing crimes, being greedy, and having temptation. Macbeth can be seen as either a hero or a villain.

At the start of the play, Macbeth was what looked to be a hero. There are numerous great characteristics to show that Macbeth is a hero such as him being loyal, kind, and overall having a good reputation. First, Macbeth had a good reputation. The idea spoken consisted of Macbeth to be a “valiant cousin, worthy gentleman” (Act 1, Scene 2, Line 1) by Duncan, the king. This means King Duncan is admiring Macbeth for his remarkable struggles in the war, by calling him ‘valiant cousin’ which indicates he is in close relationship with King Duncan. Also, by saying he is a worthy gentlemen, Duncan is saying he is an honourable fighter. Second, Macbeth is a very loyal man. “Till he faced the slave; which ne’er shook hands, nor bade him farewell to him, till he unseamed him from the nave to th’ chops, and fixed his head upon our battlements.

” (Act 1, Scene 2, Line 9) This quotation explains just how loyal Macbeth was to King Duncan and his country.

He put his life in danger to fight in the battle against the enemy Macdonwald. This was the last battle he fought after meeting the three witches. Last, Macbeth was a kind guy. For instance, he showed great love for his wife at the start of the play. When Macbeth wrote letters to Macbeth telling her how he was, what his new thoughts were, and explaining how much he loved her, he is being a kind and thoughtful man. From all his heroic titles at the beginning it shows Macbeth achieving the ‘understanding of a hero as a person noted or admired for their courage or outstanding achievements.’ (Illustrated Oxford Dictionary, Dorling Kindersley). Macbeth’s bravery, loyalty, and kindness are absolutely what make Macbeth a heroic character. Macbeth is also a villain in the beginning of the tragedy. A villain is defined to be an evil person who goes by evil approaches to get what he needs. First, Macbeth determines he wants to be King of Scotland. He decided this when the witches predicted that he would be Thane of Cawdor. If the witches never welcomed him King of Scotland at first, he never would have prediction about killing the king. His action directed him to keep shedding people’s blood, and was in blood too deep he couldn’t go back. Later in the play Macbeth says to Lady Macbeth, “I am in blood / Stepp’d in so far, that, should I wade no more, / Returning were as tedious as go o’er.” (Act 3, Scene 4)This statement paints the image of Macbeth bathing in a sea of blood, being so far that it is easier to carry on than to go back.

Also, he grew more detached from his wife, Lady Macbeth, and made choices without her recognition. For example, when he started to kill innocent families such as the MacDuff family and didn’t tell Lady Macbeth. So then he became more cruel in his tactics to stay as the King of Scotland and the public define him as ‘This tyrant’ (V, iii) and ‘A dwarfish thief’ (V, ii), by his evil ways. Lastly, during the play, every time Macbeth attempts to attain his ambition, he constantly blocks his respectable qualities in favour of a more wicked approach. This ambition of his points him to develop a troublemaker later in the play, which leads to his downfall and concluding murder by Macduff. For instance, a major evil action Macbeth did was killing King Duncan just so he could become king and gain power. In the book Macbeth stated: “I am settled, and bend up

Each corporal agent to this terrible feat.
Away, and mock the time with fairest show:
False face must hide what the false heart doth know.” (Act 1, Scene 7, Line 90, Pg. 61)

What Macbeth is stating is that he is ready to kill King Duncan, and after he is done he will have to act upon his ‘false face’ and try not to have the guilt sink in from the truth in his heart. These evil ways proved Macbeth to be very cold hearted and a serial killer. There is no doubt that Macbeth was a villain by his greed, despair, and temptation.

Last, Macbeth had a choice to be evil or be a hero. First, the witch’s prophecies gave him a choice to make. He could have listened to them or did what he thought was good, but instead he chose evil ways. When Macbeth tries to find the witches in a dark cave, he finds them, and then they show him three ghosts. The first spirit seems as an armed head that says, “Macbeth! Macbeth! Macbeth! beware Macduff; / Beware the thane of Fife.” The second spirit is a gory kid that tells Macbeth, “Be bloody, bold, and resolute; laugh to scorn / The power of man, for none born of woman / Shall harm Macbeth.” At last, the third apparition was another child with a crown on his head, telling Macbeth that he “Shall never vanquished be until Great Birnam wood to high Dunsinane Hill / Shall come against him.”(Act 4, Scene 1) This false self-assurance Macbeth was given was very significant so he could make his ultimate decision which ended in defeat. Macbeth had his wife’s thoughts too. Lady Macbeth convinced him to commit the murder when he questions the consequences to her.

For Macbeth to be evil, he went with Lady Macbeth telling him he was too ‘un manly’ to kill Duncan and he should do it to become a man and not be a kid. The direct quotation that was used for Macbeth’s wife was “When you durst do it, then you were a man “(act 1, scene 7, line 4). Macbeth had a lot of decisions to choose the evil way or the hard way. He could have picked the heroic side which meant him still being thane of Caldor and Glamus, being treated nicely by Kind Duncan, and not feeling guilt by killing innocent people. Macbeth in the end, chose the wicked ways which sooner or later killed off his wife from her extreme guilt. This would not have happened if he had made accurate decisions. Unluckily, this is all triggered by miss treatment, being misled by his loved one, not seeing any enhancements he has made and non-existence love.

In conclusion, MacBeth is a complicated character whose human nature means that he retains both good and evil qualities from the start of the play to the finish. He was heroic by being a strong person, a hero to Scotland, a Lord under the instruction of King Duncan, and having no reason to feel hopeless with where he is in life. Macbeth’s bravery, sense of right and wrong and his hesitant method of bad behaviour are as well-known as his evil ambition, cunning and cruelty. Macbeth cannot be argued as being purely heroic or villainous; the difficulty of his character is proven by his vicious inner struggles and powered by his imaginings. It’s very tough to specify if Macbeth is evil or a hero, so from the thoughts everywhere what would you reflect? Works Cited:

Is Macbeth a hero or villain?. (2016, Apr 12). Retrieved from http://studymoose.com/is-macbeth-a-hero-or-villain-2-essay 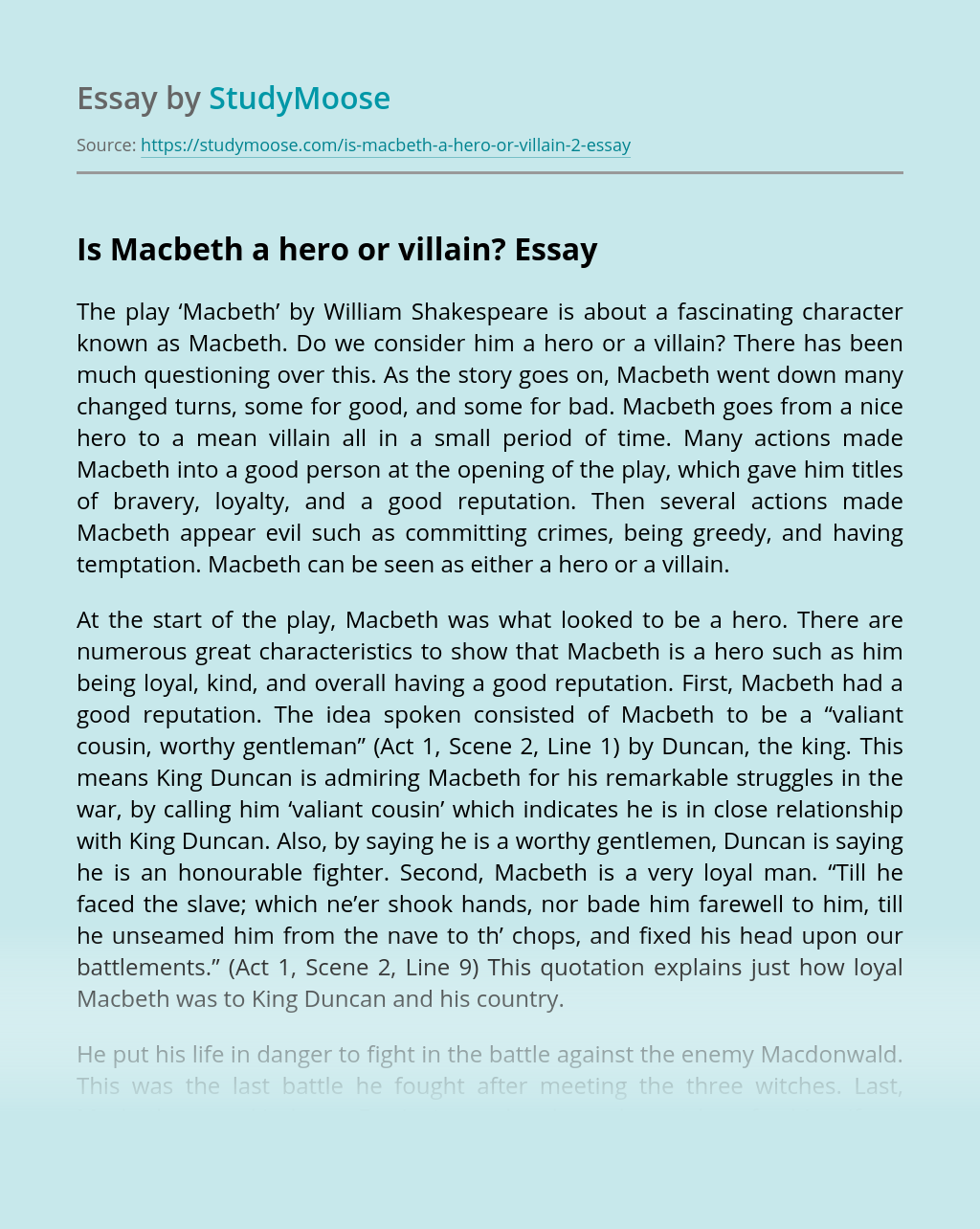