Liam Roberts Mrs. DePoala Writing Focus 2B Nov. 7, 2011 History has shown that power corrupts and power corrupts absolutely. Anyone is capable of hubris leading to their downfall. In the famous tragedy Macbeth by William Shakespeare, Macbeth is prompted by the prophecy of the weird sisters that he will become king. Macbeth leads a tyrannical reign, and he will stop at nothing to keep his throne secure. Macbeth transforms from a soft and heroic leader to an arrogant and destructive dictator because of his enormous hubris.

Don't use plagiarized sources. Get your custom essay on
“ Macbeth Hubris ”
Get custom paper
NEW! smart matching with writer

The temptation to become king led Macbeth to become a destructive tyranny in which Macbeth slaughtered many to get what he wanted most, and he wanted power. Macbeth was intrigued by the weird sister’s prophecy and was tempted to do anything possible to gain the throne. “I have no spur to prick the sides of my intent, but only vaulting ambition, which o’erleaps itself and falls on the other” As Macbeth deliberates, he realizes that “vaulting ambition” is all that compels him to the heinous act of murdering Duncan and that his intent is nothing but personal gain.

This is not enough to justify the act of killing a king, which is why he resolves to not go through with it after this speech. Eventually after murdering so many people to get throne his guilt caught up to him and lady Macbeth, “I am in blood stepp’d in so far, that, should I wade no more, returning were as tedious as go o’er”, Macbeth explained how he was in so deep that there was no going back and even if he were to stop it would be too much work.

Macbeth’s hubris leads to his gain of the throne but his endeavors to have power also led to his downfall.

Macbeth thought nothing would stop him, that nothing would end his dictatorship. “Look like the innocent flower, but be the serpent under it. ” By saying this lady Macbeth is so proud of what they are doing and that she is trying to look innocent but be devious so as to not be caught doing such wrong deeds. When Macbeth saw the apparitions his hubris grew even larger. The apparitions were telling him to be careful of his enemies and those around him because at any time he could be betrayed the pparitions were also telling him that his throne would not always be secure, so then he went to great lengths to be sure he would never lose his power, and eventually ruined everything he ever had that was good, and thought life was pointless and had not worth. Macbeth’s corruption is a perfect example of corruption through power. Macbeth had power that corrupted him and once he got a little power he wanted more and more until he had nothing left and everyone around him had strayed away. Macbeth was so power hungry that nothing stopped him from getting what he wanted except Macduff. Macbeth’s power and great hubris only lead to his downfall. 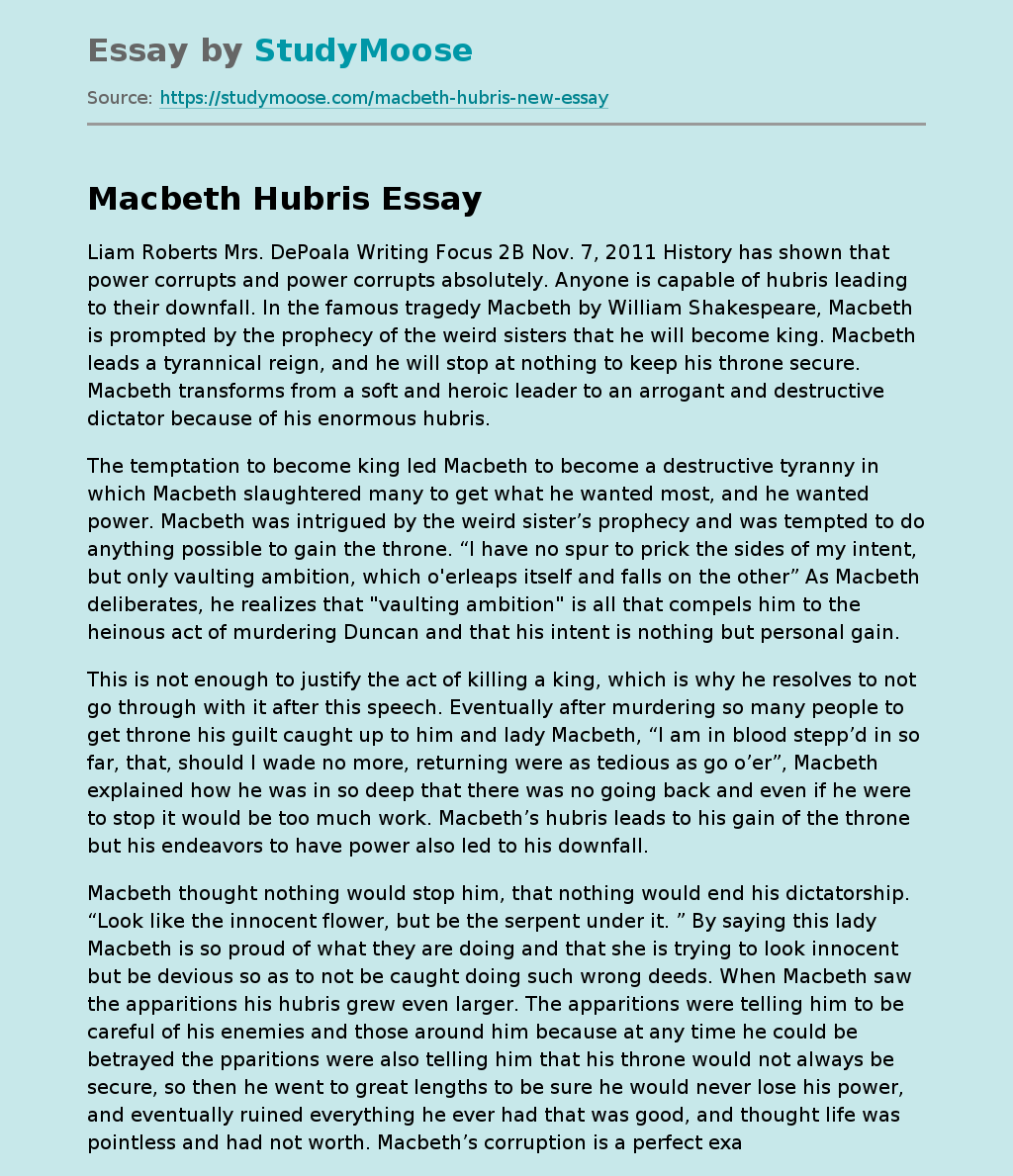