Everyone is Equal but Some Are More Equal than Others

Given the opportunity to ultimate power, even a good man can become bad. The novel Animal Farm is written by George Orwell published in 1949; this type of novel is called a fable. Animal Farm is written about the Russian revolution and how Joseph Stalin committed sins against Russia when he gained power. The main character, Napoleon, is based on Stalin, and is the leader of Animal farm who sins against the farm. Too much power corrupts those who possess it, just as Napoleon did.

Don't use plagiarized sources. Get your custom essay on
“ Everyone is Equal but Some Are More Equal than Others ”
Get custom paper
NEW! smart matching with writer

In order to get this theme across he has used a fable to replace human beings with animals and show the process of power corrupting. In Animal Farm, the revolution all started with a dream one of the oldest pigs had. Old major’s dream was about how humans are using the animals, and that the animals would be better off running the farm on their own.

He states “Is it not crystal clear comrades, that all the evils of this life of ours spring, from the tyranny of human beings, only get rid of man and the produce of our labour would be our own.

This was the initial start of the uprising. The pigs of the farm were one of the smartest animals on the farm. The pigs led the rebellion and the main leaders were Snowball and Napoleon. The Animals conquered the rebellion to win the farm over. After the animals won the rebellion, they made seven commandments.

Page 15 “These seven commandments would be inscribed on the wall; they would form an alterable law by which all the animals on Animal Farm must live for ever after. ” Napoleon and Snowball both battled over to be the main leader of animal farm.

Initially one would have to be the main leader so Napoleon came up with a plan to conquer over Snowball. Napoleon views Snowball’s actions as a direct challenge to his authority. Using the dogs that he had reared from puppies, Napoleon chases Snowball from off the farm. The other animals are amazed at this turn of events and now suddenly, they feel vulnerable to Napoleon’s power. Napoleon became a strong leader of Animal Farm. Napoleon used all his knowledge and education to take over the farm and for the production of the windmill.

Chapter 6; “The windmill presented unexpected difficulties. ” The animals worked very hard for many months on the windmill. With all the pigs and dogs on his side, Napoleon had absolute power over everyone. However, there were more difficulties to come with the rebel of the farmers. Although Napoleon seemed like a good leader at first, he becomes very corrupted, when he gained absolute power. Napoleon took over Animal Farm which led to food shortage, except for him and the other pigs, as they had plenty of food. Many of the other animals were starved and weak.

Consequently many animals also died due to the power of which Napoleon held. Napoleon changed one of the commandments to “No animal shall kill another animal” to “No animal shall kill another animal without cause” after the executions he did to some of the other animals. Napoleon could not control himself now due to all the power he had. As Napoleon and the other pigs gained more and more power, it becomes harder for them to resist the temptations of enjoying an easier life. Finally they had changed all of the commandments to just one: “All animals are equal but some are more equal.

Power allowed Napoleon to manipulate others and distort information, which then ensures ultimate power and control. Napoleon’s absolute power leads to corruption, which maintains his control. Napoleon received absolute power, which corrupted the society as a whole. The pigs became just like men. They became the exact thing they tried to remove when they took over Animal Farm. Napoleon turned out to be trying to save animal farm and all the animals but in the end turned against them and only cared about himself. Clearly Napoleons character relates to the statement “Absolute power corrupts absolutely” very consistently.

Everyone is Equal but Some Are More Equal than Others. (2016, Sep 29). Retrieved from https://studymoose.com/everyone-is-equal-but-some-are-more-equal-than-others-essay 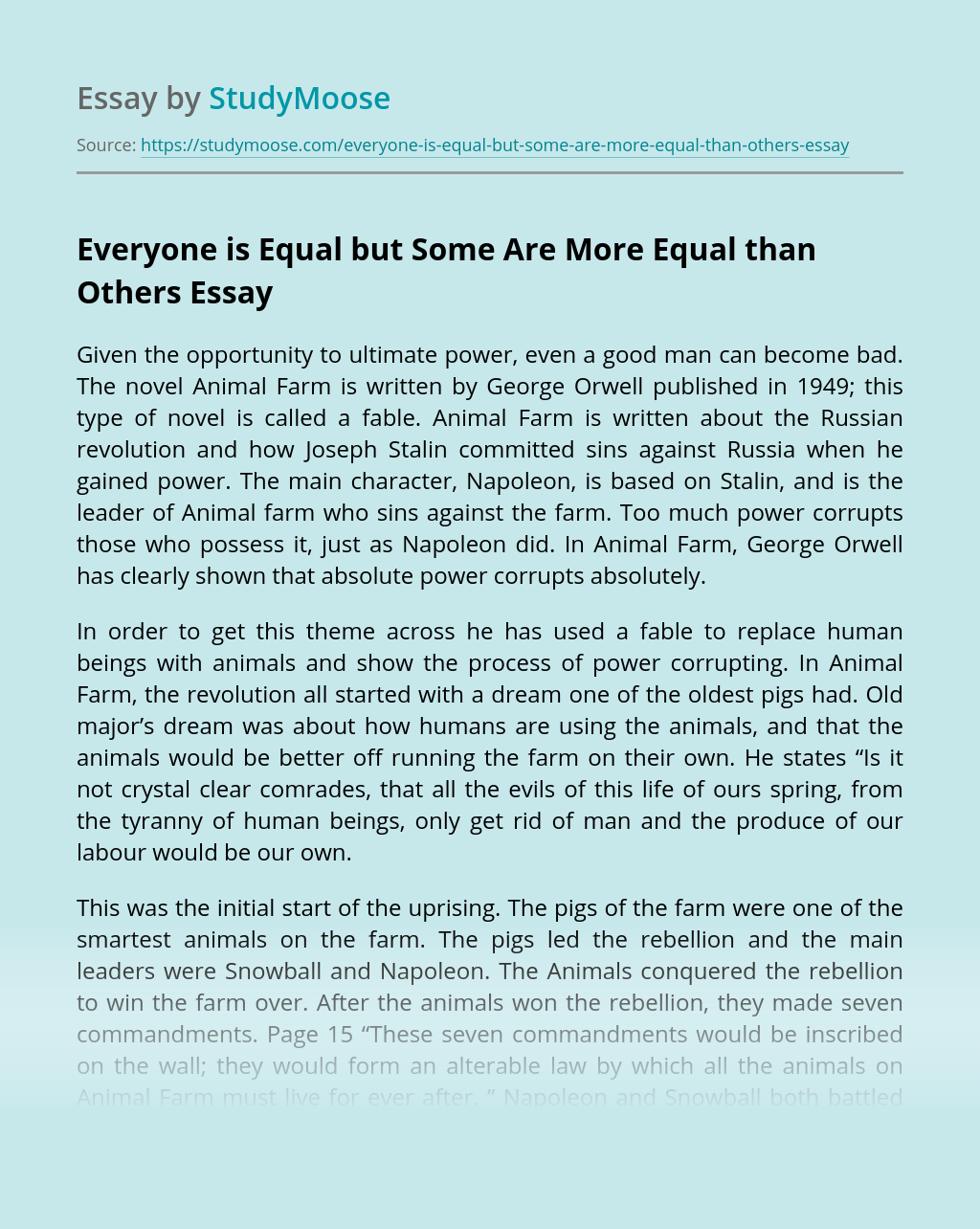