George Orwell’s Animal Farm is an allegorical novel that reflects events such as the Bolshevik revolution, the economic reform by Trotsky the Russian famine in 1921 and during the Stalin era before the Second World War. The pigs represent the communist leadership, and the rest of the animals on the farm symbolize the different parts of Russian society and how the communist takeover of Russia affected them. Two main characters, Snowball and Napoleon (who symbolize Trotsky and Stalin), engages in a political struggle, as both of them wanted to have the power to lead all of the animals.

Don't use plagiarized sources. Get your custom essay on
“ Napoleon and Snowball (Animal Farm) ”
Get custom paper
NEW! smart matching with writer

Although Napoleon wins the struggle in the end, Snowball’s political strategy is better than the corrupted leadership of Napoleon.

Snowball cares more about the living condition of the animals. Compared to Napoleon, Snowball knows the meaning of “Animalism”, which is animals are equal and it should lead the animals to a better life. Snowball is interested in reading all kinds of books to enrich his scope of knowledge to make the animals work easier.

For example, he declares the windmill idea from a book of the Jones. Also Snowball is very brave; he has studied the book of Julian Caesar and successfully led through the Battle of the Cowshed while Napoleon was hiding himself in the barn.

Snowball has an intelligent and friendly character. Unlike Napoleon, Snowball never forces someone to agree with his ideas. Instead, he is good at explaining how his ideas work and persuades all the animals to believe and trust his ideas.

Unlike Napoleon, Snowball does not need Squealer’s help, he can do the explaining part all by himself. Napoleon has his own ways to control other animals such as the dogs and Squealer but Snowball has different way which is the committees.

Snowball seems to work better within the political system. Napoleon goes around it. Napoleon, for instance, he understands the role of force in political control and uses his attack dogs to expel Snowball from the farm. Napoleon seems to have a powerful, self-centered desire for control, while Snowball seems to think of himself as a genius who should be the one to guide the farm toward success.

Snowball is the only one who knows the real meaning of “Animalism”, and he is putting out true effort to make the living standard of the animals better than before, and insists everyone is equal. After the expel of Mr. Jones, the Animal Farm is supposed to be democracy, all of the animals should decide how to do things together, any one animal to rise to greater power than any other would violate that ideal, and make Animal Farm indistinguishable from a human farm. On the other hand the only thing that Napoleon thinks about is how to gain more power and personal benefit from the farm. Snowball always comes up with some long-term plans and on the other hand Napoleon can only come up with some short-term plans. In conclusion, Snowball’s political strategy is better then the corrupted leadership of Napoleon. 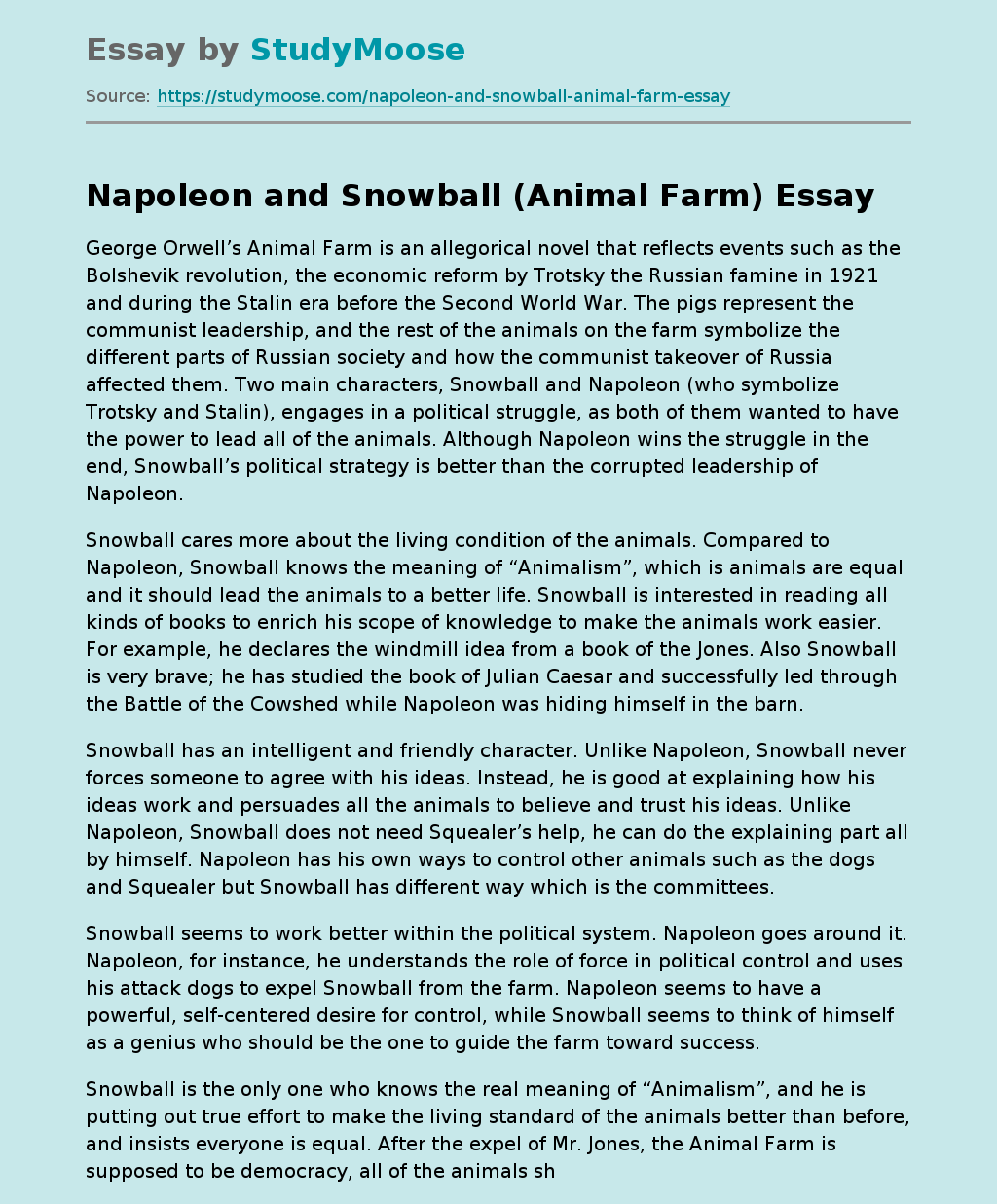