Napoleon and Snowball are characters who represent Stalin and Trotsky. Explore the conflict between these two characters presented by Orwell in Animal Farm ‘Animal Farm’ is an allegory which presents George Orwell’s views on communism in the form of an anthropomorphic fable. The main characters are Snowball and Napoleon, who represent Trotsky and Stalin, are two opposing characters whose conflict is presented in a number of linguistic and structural ways. An example of this are the different ideas of ‘Animalism’ which Snowball and Napoleon have.

Don't use plagiarized sources. Get your custom essay on
“ Napoleon and Snowball ”
Get custom paper
NEW! smart matching with writer

Snowball strives for equality whilst Napoleon becomes a power-driven dictator. One of the first differences that emerge between Snowball and Napoleon are their physical differences described at the start of Chapter 2 Napoleon is described as a ‘large, rather fierce-looking’ pig which foreshadows his future violent ways of dictatorship , as well as showing that Napoleon takes more than his fair share.

On the other hand, Snowball seems to be a more suitable leader as he is ‘quicker in speech’ and ‘more inventive’.

However, it appears as if Orwell is foreshadowing Snowball’s eventual inferiority by mentioning that he was not ‘considered to have the same depth of character’. In my opinion, throughout Chapter 2, Orwell is making the reader feel more inclines towards Snowball by presenting him as someone who strives for equality and seems to be on the animals’ side. The main source of conflict between Snowball ad Napoleon, especially during the first half of the novel, was due to the fact that ‘these two were never in agreement’ and this is shown through the way they utilise (or manipulate, in Napoleon’s case) their power over the other animals’.

Snowball is full of plans and ideas, such as education and generating electricity which help optimise the animals’ lives. We know that Snowball is driven to spread the word of ‘Animalism’ by creating simplified maxims such as ‘four legs good, two legs bad’.

However, Orwell portrays the idea that a lot of these plans are idealistic as many of these fail and this becomes apparent when Orwell lists them but abruptly ends the list with the sentence ‘on the whole these projects were a failure’, creating bathos and a satirical tone. On the other hand, Napoleon becomes a dictator whose only goals are to gain power for himself and the reader is aware of this when ‘the milk has disappeared’ at the end of Chapter 2- we later learn that this is mixed in with the pig’s food. Napoleon ‘took no interest in Snowballs’ committees’ and instead uses fear and his propaganda agent Squealer to gain dominance over the animals, showing that his idea of dictatorship is based more on fascism that the utopian vision of ‘Animalism’. Squealer plants the idea in the animals’ heads that if they do not follow Napoleon ‘Jones will come back’. He also uses the dogs, which he took from their mothers when they were puppies and trained them to be guard dogs, as a fear element.

The pigs are the most educated animals on the farm (probably due to Napoleon focusing on indoctrinating only the pigs) and use their higher skill level to position themselves above the other animals. Orwell portrays this by reminding the reader numerous times throughout the novel that the pigs were ‘the cleverest of the animals’. Napoleon abuses this which is noticeable in Squealer’s speeches when he says that apples are ‘absolutely necessary to the well-being of a pig’ and using complicated languages to obfuscate the pigs. Eventually, Napoleon usurps dominance over the farm bad the animals start looking up to him, creating dangerous maxims such as ‘Napoleon is always right’ and the sheeps’ bleating of ‘four legs good, two legs bad’ used to drown out anyone who disagrees with Napoleon. ‘Animal Farm’ mirrors the events of the Russian revolution and Orwell’s purpose is to show the reader that, although it seems ideal in theory, communism is flawed.

The reader can sense that this is satire because Orwell ridicules his targets by reducing political figures to the level of unflattering farm animals, especially pigs who are renowned for their greed and gluttony. Snowball represents Trotsky who was a brilliant leader. However, Napoleon attempts to expel Snowball form the farm, just like Stalin expels Trotsky. Napoleon then tries to eradicate Snowball’s name from victorious memories such as his triumph in the Battle of the Cowshed and make him into a traitor. He blames Snowball for the destruction of the windmill as well as spreading rumours that he is ‘secretly frequenting the farm by night’ and causing mischief. In my opinion, it is worrying how easily the animals’ convinced, which shows just how powerful Napoleon is. Structure plays an important role in building tension and introducing conflict. Things seem to get worse with each chapter and the farm seems to rapidly descend into a fascist dystopia soon after Snowball is chased off the farm.

There also seems to a few instances of irony created by Orwell’s juxtaposition- for example, he tells the reader that the animals suffer ‘hardships’ but that they also have a ‘greater dignity’. This portrays the ignorance of the animals, as well as conveying Orwell’s mocking tone. This mocking tone is found in various pleas throughout the novel to emphasise how oblivious the animals are to the despotic nature of Napoleon. For example, Squealer is found obviously changing the commandments but ‘none of the animals could form any idea as to what this meant’ which not only shows oblivion but due to the fact the blindly accept everything Napoleon says, they cannot think for themselves. 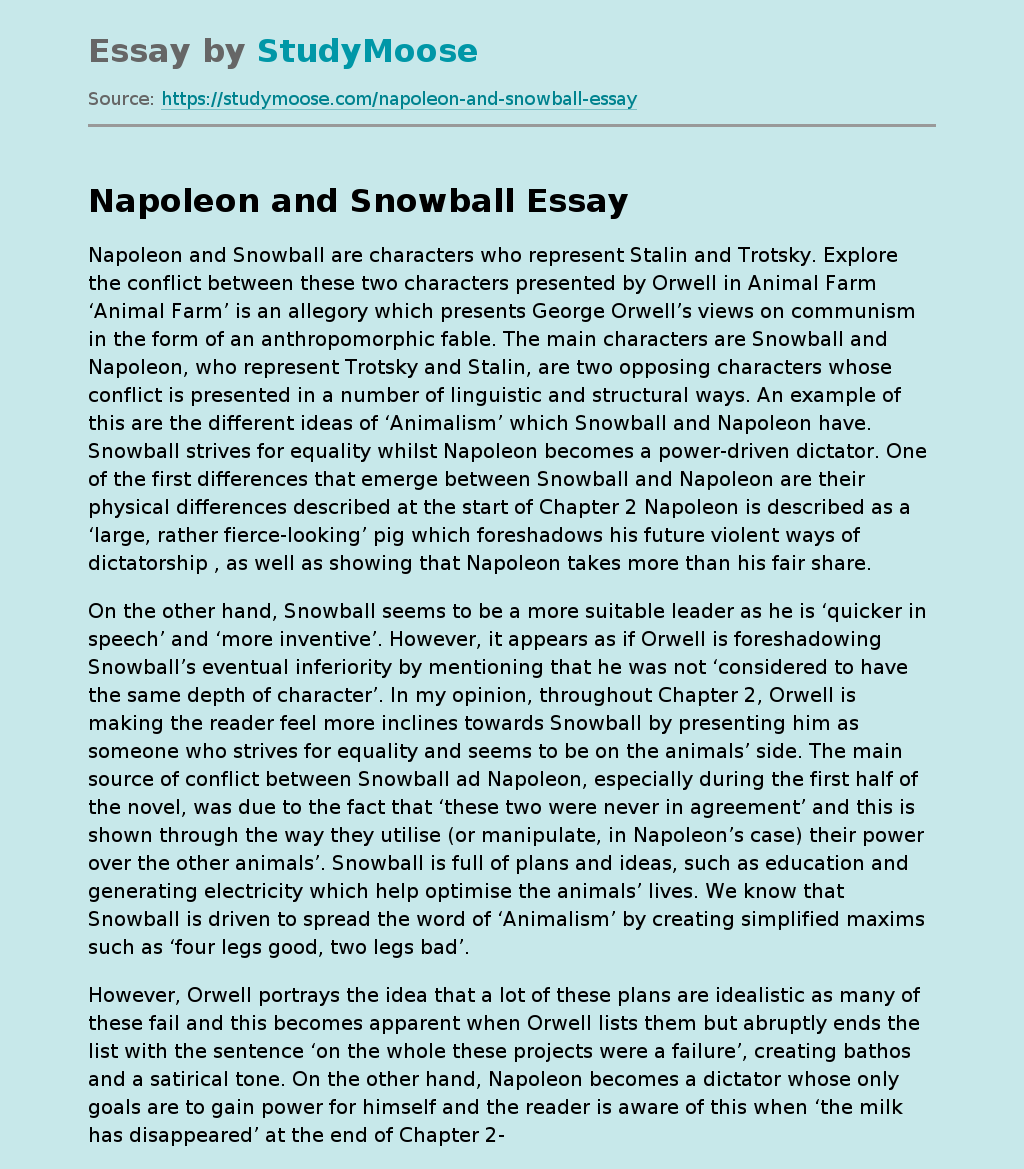