In the allegorical fable, Animal Farm, by George Orwell, the author uses satire through political ideas and misuse of power. Satire is the use of humor, irony, exaggeration, or ridicule to expose and criticize people’s stupidity or vices, particularly in the context of contemporary politics and other topical issues. The animals decide to rebel against the humans, and the war began to break out. Eventually, the farm splits into two assemblies but ruled by one, Napoleon. All went wrong when the pigs took over as rulers of the farm, and the food became limited for all animals except for the pigs and dogs.

Don't use plagiarized sources. Get your custom essay on
“ Animal Farm: Orwell and Political Allegory ”
Get custom paper
NEW! smart matching with writer

‘Nevertheless, some of the animals were disturbed when they heard that the pigs not only took their meals in the kitchen and used the drawing-room as a recreation room but also slept in the beds.’ (chapter 6) By the end of the novel, most of the animals were dead, the pigs became friends with the human’s, and they changed the name of the farm.

’ (chapter 1) The idea of Animalism was misused by the leader, Napoleon, as he became selfish towards the rest of Animal Farm. This was ironic considering Napoleon established the seven commandments. In chapter 10, Napoleon says, ‘All animals are equal, but some animals are equal than others.’

Frequently in a communist society, the leader’s use of language can lead to abuse in power. In the novel, the pigs use unknown language to try and control the other animals on the farm. ‘The pigs did not work but, directed and supervised the others. With their superior knowledge, it was natural that they should assume the leadership.’ (chapter 10) For example, Napoleon abuses power by rewriting the past and explicitly telling the whole farm that Snowball was an enemy since the beginning and that he premeditated being on Jones’s side at the Battle of Cowshed. He accumulates the power of the minds of all the other animals. Napoleon also uses his ability to control the animals physically by having the dogs suppress anyone who he assumes betrayed him.

In conclusion, Orwell uses satire in this fable to simplify the story. Mainly to make it more understandable for teens and adults who don’t necessarily understand political issues. I believe teens and young adults were the intended audiences for this fable. The suitable warning in this novel is the idea that if people are seeking power in this idealistic revolution, then things will become corrupt and cause significant issues as we see in this story. 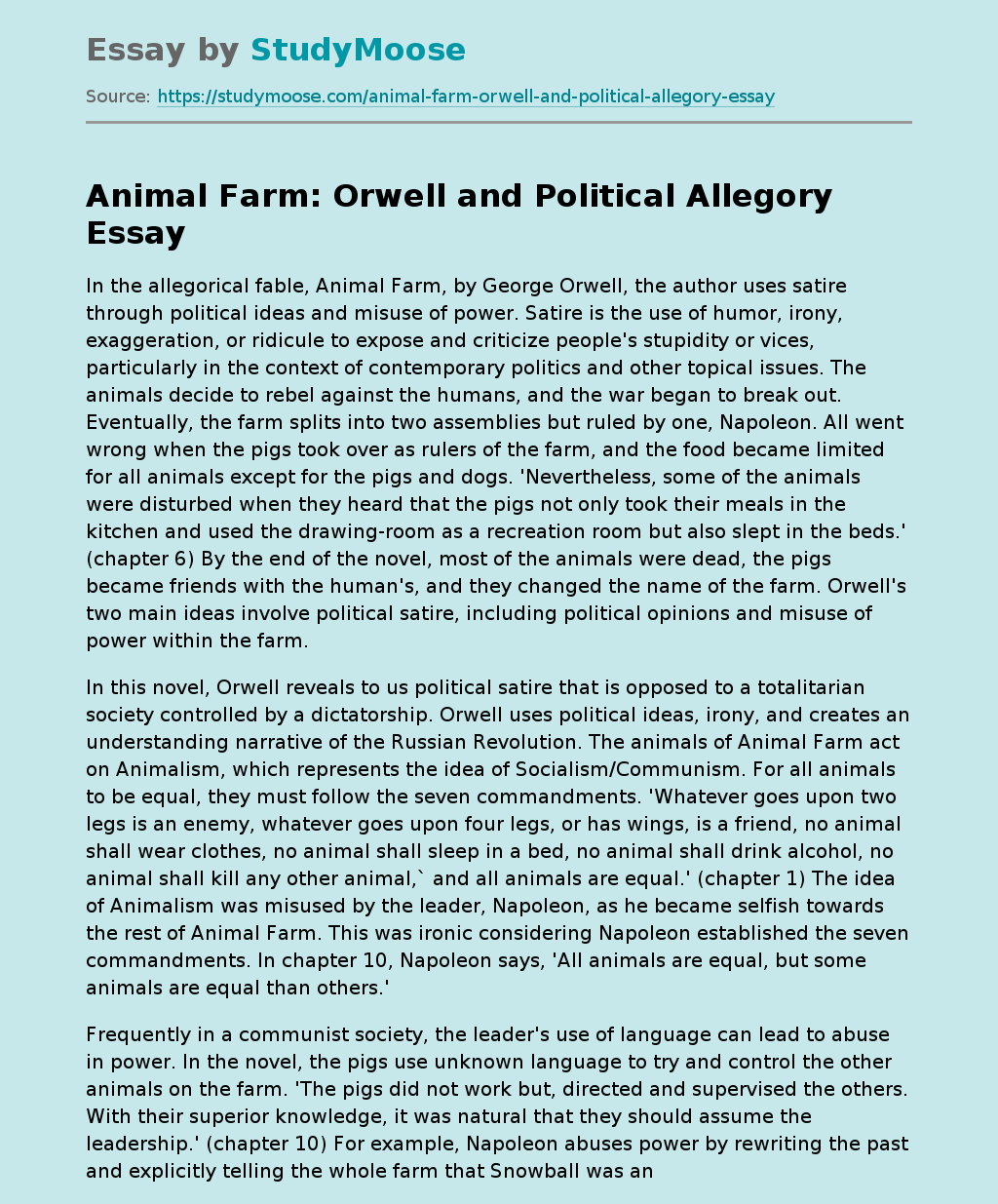