George Orwell describes the story as a fairy story on the first page (A Fairy Story) surely there must be a reason for this. First of all we need to ask ourselves a fundemental question. What is a fairy story? If it is a story that is set in a rural surrounding like a farm then Animal Farm certainly is a Fairy story. However there is more to a fairy story than that. For a start, Animal Farm has a certain element of an animal maintaining its specific characteristics.

Don't use plagiarized sources. Get your custom essay on
“ ‘Animal Farm’ By George Orwell ”
Get custom paper
NEW! smart matching with writer

In real life, animals such as foxes are seen as cunning and sly, whereas animals like dogs are seen as loyal. This presentation of animals is common throughout Animal Farm.The pigs are also shown in the same way pigs are seen as greedy and selfish in the real world, and in the novel, it states that ‘the milk and the windfall apples…should be reserved for the pigsalone’ we can easily see from this that Animal Farm brings out the animals in their true characteristics but any typical fairy story would not usually share this veiw.

A fairy story is written to be read by children. Obviously, this must contain certain characteristics, so that young children enjoy it. It should have a very basic plot, simplistic and nostalgic language and usually an old-fashioned linguistic style etc. Talking animals are stereotypical, living in a rural setting.

A fairy story includes choruses and refrains. Violence is a frequent occurrence within a moral scheme – heroes versus villains, with a happy ending. Does Animal Farm contain these characteristics of a fairy story?

Animal Farm does not include all the essential characteristics of a fairy story. In this novel, animals are not stereotyped. Napoleon, for example, is cruel throughout, until, at the end, Napoleon changes – he laughs and socialises with humans in the bar. In other words, Napoleon subverts his true nature; he becomes a socialiser, as opposed to a dictator. Napoleon and all the pigs’ begin as equal to all the farm animals. As the story progresses, Napoleon and the pigs evolve – they become superior to all their peers. This corresponds with the famous lines in Animal Farm (at page 90): ‘all animals are equal, but some animals are equal than others’. In most fairy stories, the story has a rural location – the countryside as a pastoral setting. Animal Farm, however, whilst set in a rural area, this is far from a pastoral – it is a place of fear and intimidation. The expulsion of Snowball (at page 36) is a good example he lives in a rural area and yet he is not in a safe and secure environment.

There is no moral scheme of heroes and villains. Initially, the pigs are very helpful and lead the rebellion in the interest of all animals. As the story develops, the pigs begin to exploit and dominate the other animals. The pigs begin as heroes and end as villains yet the reader is still none the wiser as to who is hero and who is villain. A fairy story is simplistic and easy to understand. In the Fairy story Little Red Ridding Hood, although the wolf is clothed from head to toe in grandmas’ clothing and looks like the hero we know that the wolf is infact the villain of the story. In Animal Farm, we do not know the situation between napoleon and the humans because they were quarrelling. In Animal Farm, the story ends with no natural moral justice. ‘The creatures outside looked from pig to man, and from man to pig, and from pig to man again: but already it was impossible to say which was which’. At the end of all fairy stories, the natural moral justice is evident to the young child reading the story.

On page 1 of Animal Farm the first sentence does not commence ‘Once upon a time’. A fairy story usually begins with the sentence ‘Once upon a time’. Animal farm is intended to be read by adults consequently it does not begin, with similar styles to fairy stories. A fairy story typically ends with the sentence ‘and the all lived happily ever after’. On page 95 of animal farm the last sentence is not ‘and they all lived happily ever after’ seeing as Animal farm is an adults story, it does not contain children’s styles of writing. Animal farm does not encompass a happy ending. A fairy story contains a happy ending to create the image of a safe and secure world. Adults do not need books to include styles that reassure them, they read because they find the material interesting. Animal Farm has 95 pages whereas a child’s fairy story more often than not is only of a 30 page length. Children can only grip diminutive amounts of text. Adults can deal with much generously proportioned amounts of writing therefore Animal Farm is a much longer book than any child’s fairy story. Animal farm has approximately 200 to 250 words per page a child’s fairy story has 30 per page. Adults have a larger concentration span they are capable of concentrating for a longer periods than children. A fairy story has a smaller quantity of words per page than an adult’s book due to this. Animal Farm uses complex language ‘casting a peculiar sidelong’ on page 35, a fairy story does not use language of this sort a fairy story contains simplistic language of a young child’s capability. ‘A violent quarrel was in progress on page 95 of animal farm. A fairy story is trying to produce the impression of a safe and tranquil world. Animal Farm does not try to create a false impression of the world it portrays the exact state of affairs of the world we are in.

Up till now all the listed points above have been the ways in which in cooperation Animal Farm and a child’s fairy story contrast in both, how the ways they are written and who they aim to interest.

In most Fairy stories, animals have human capabilities they are able to speak read and build. In Animal Farm animals are also able to speak read and build, last sentence page 95. In Animal Farm, there are episodes of violence. The purges when Napoleon sends many animals to their death. In the Fairy story The Three little Pigs the wolf that climbs down the chimney falls into a pot of water that is boiling on the stove consequently he dies this is an example of violence in a fairy story. Animal farm has chorus ‘Beats of England’ just as The Three Little Pigs does ‘Ill Huff and Ill Puff and Ill blow you’re house down. These are some comparisons between Animal Farm and a Fairy story.

George Orwell wrote the book to inform the world on the subject of communism and communism will never work due to human nature. Greed is the nature of human beings the idea of communism is that people are all on the same level. People are greedy they will never want to be on the same level as others they will always want to be superior to others. George Orwell had to call the book a fairy story through fear of upsetting and antagonising the communist regime of the Soviet Union. The human nature is self-indulgence Napoleon became greedy and began to tighten his grip on animal Farm. The animals of the farm never stood up they never protested his dominant presence. Napoleon gained control of the farm and gave himself the position of being principal of the farm. The animals should have rebelled and driven napoleon away from the farm. A Fairy story is not written to inform children, it is written to embed morale point inside the child from a young age they learn how to act and remember the story for the rest of their lives. In The Three Little Pigs the morale point is when you execute a job accomplish it properly. The third pigs house was made of bricks it was hard to destroy, unlike the other pigs houses. 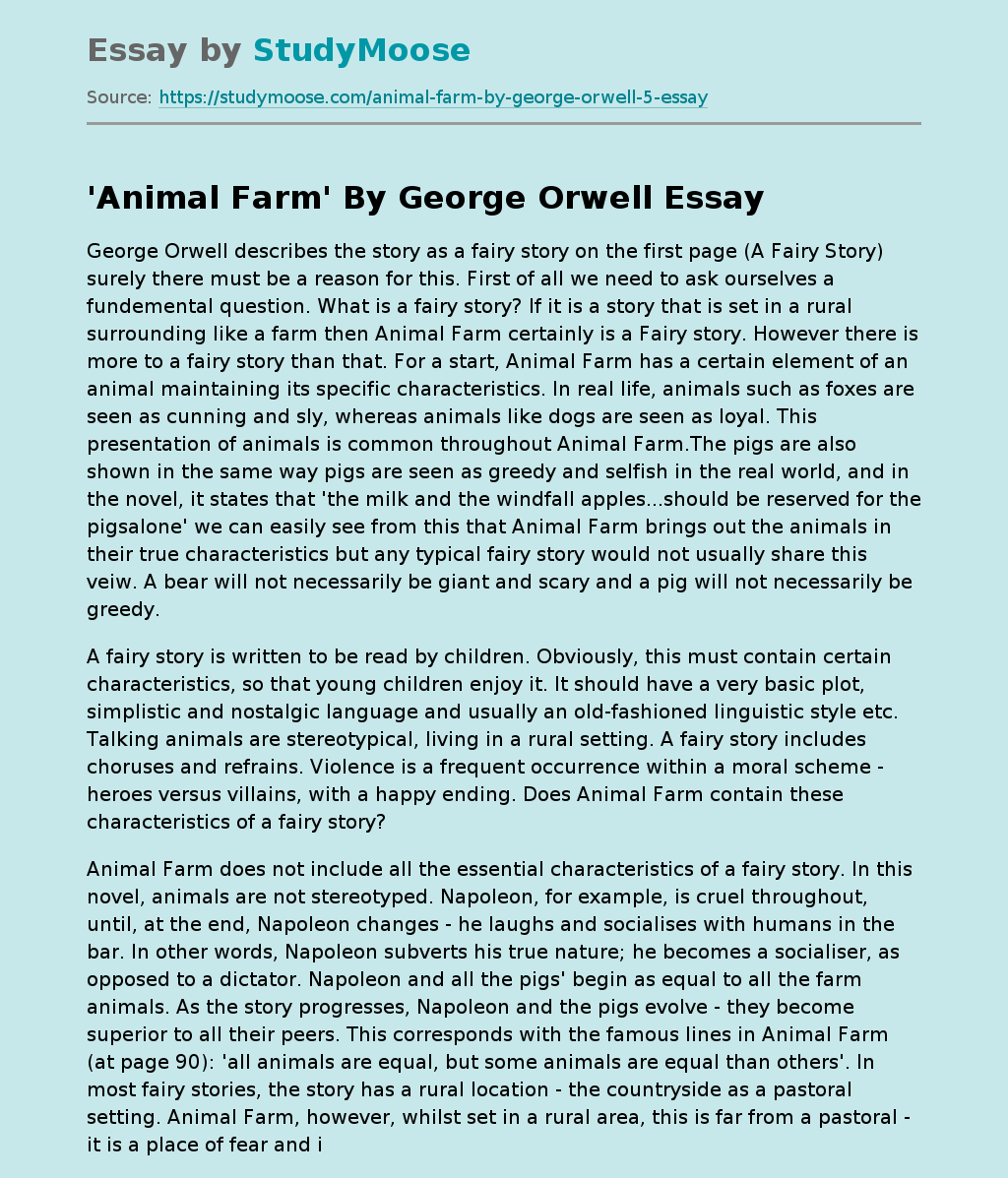