In the book Animal Farm, all the main characters are animals. The book starts with all the animals of the farm, gathering to hear the old wize pig, Old Major, telling the other animals of a dream that he has had. Not so long afterwards, Old Mayor dies. The story of Showball starts when the pigs Napoleon, Squealer and Snowball listen to the Commandments of the Old Mayor. They have just thrown out the humans, and are now very excited about their future.

Don't use plagiarized sources. Get your custom essay on
“ Animal Farm by George Orwell – A Character Analysis of Snowball ”
Get custom paper
NEW! smart matching with writer

The Commandments have the purpose to save Animal Farm from the human rulers like the previous farmer Mr. Jones. All the animals should be equal and no one is allowed to do anything that seems like human behaviour. Napoleon takes on a leading role, supported by Squealer.

Why is Snowball the biggest competitor for the power over the farm? Snowball is also a pig. All the other animals already look up to the pigs, and they are in control of the farm.

When Mr. Jones is removed from the farm, Snowball thinks they should put the ideas of Old Major in to practice, and the new Seven Commandments is the main priority. He paints the Commandments on a wall of the barn and says : `Let us make it a point of honour to get in the harvest more quickly than Jones and his men could do.Вґ Snowball also is a very good public speaker. He soon realizes that the Seven Commandments need to be made easier, so that more of the animals can understand them.

He therefore sums up all of Animalism in `four legs good, two legs badВґ which he teaches to the sheep, and writes on the barn wall. This sentence is easy to learn, but it also distorts the ideas given by Old Major, so they can be easily manipulated.

Snowball demands more food than the other animals, claiming that pigs need milk to for their brains, because they do the intellectual work. The commandments of Old Mayor are not so practical, so Snowball takes them more like moral guidelines he should try to live up to. In comparison to Napoleon, Snowball is more intelligent and a quick thinker. Napoleon knows very well how to make the other animals look upon him as a leader, and Squealer joins Napoleon helping him compensate the difference in his and SnowballВґs speaches. The farm inhabitants start thinking that Snowball is less suitable for the leader role, because he is always friendly to everyone, and has a cheerful personality. This makes him seem less of a traditional leader to the other animals.

Animals who even dream of Snowball are executed as traitors. Snowball was the biggest competitor for the power over the farm, because of his personality, his good speaches, and his thoughts that all animals should have a better life. Unfortunately Napoleon managed to convince the animals that he was a traitor. Eventually, showball was forgotten, as well as his dream that the animals would for ever live a good life. 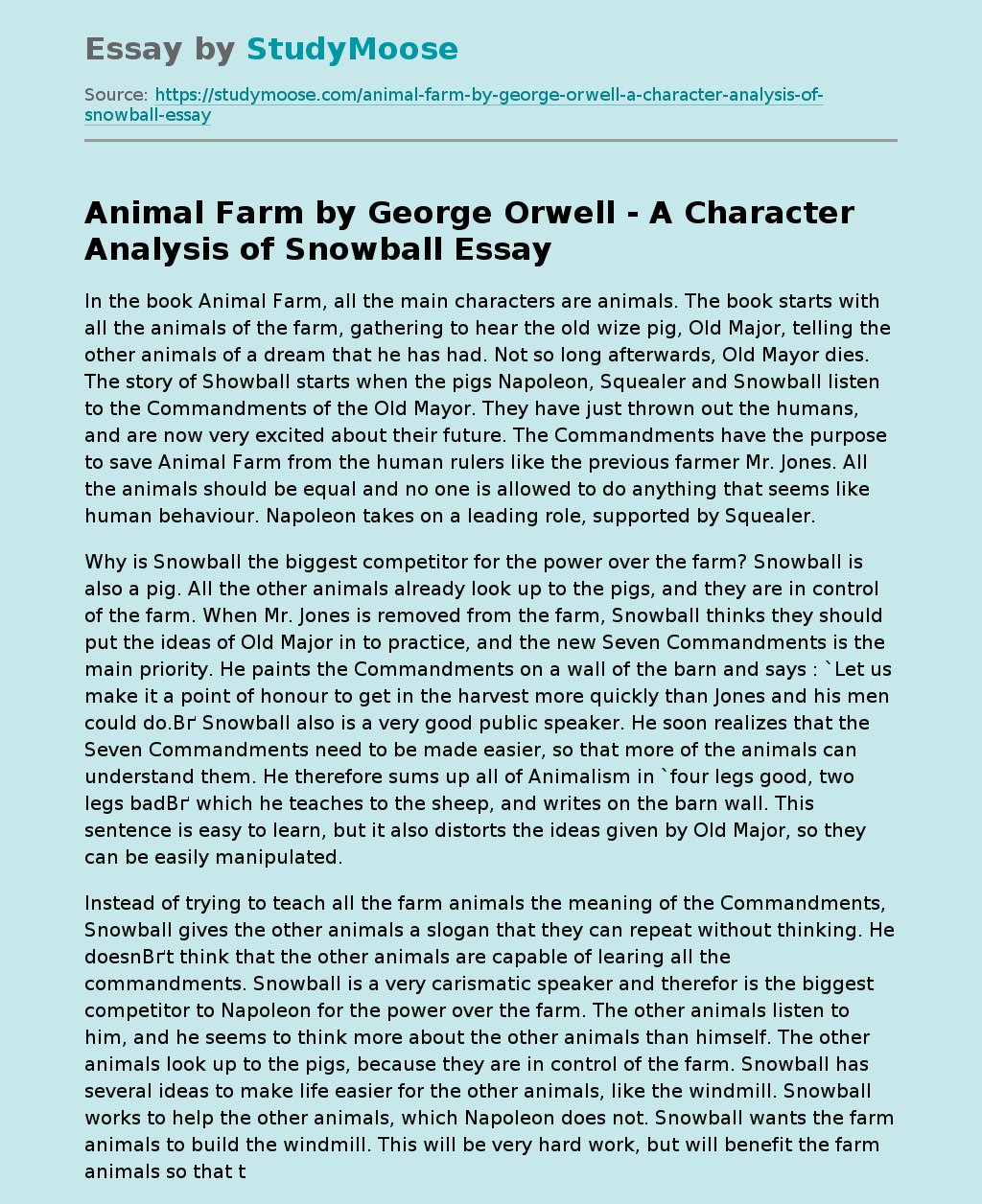