The well-known book by the name of Animal Farm, written by George Orwell, was published in 1945. Orwell’s inspiration for writing Animal Farm came from his personal experiences with class struggle and inequalities of life in England, while the actual structure of the book parallels events that were happening in Russia. The book corresponds with events leading up to the Russian Revolution of 1917 and then on into the Joseph Stalin era of the Soviet Union. Following his time in the Spanish civil war, Orwell wanted to show his strong belief that Stalin was corrupting the state and socialist ideas.

Don't use plagiarized sources. Get your custom essay on
“ Analysis of “Animal Farm” by George Orwell ”
Get custom paper
NEW! smart matching with writer

Animal Farm takes place somewhere in England and it is narrated in the third person. One day, the oldest pig, Old Mayor, calls for a secret meeting between all the animals. He tells of his dream of a revolution against their farmer, Mr. Jones. The animals soon plan an uprising and drive Mr. Jones off the farm. The animals destroy all the tools used to overpower them, including whips and reins, and created seven commandments.

The pigs become the leaders due to their intelligence and then two pigs by the names of Snowball and Napoleon take charge of everyone. What no one knows is that Napoleon had dark intentions from the start. He begins to blame all of the animals’ hardships on Snowball and then drives him off of the farm. As time goes on, the pigs move into the farmhouse, drink alcohol, and eat all the rations, while the other animals work day and night.

At the end of the novel, Napoleon invites the owners of the neighboring farm over, and when the other animals look into the window of the farmhouse, they cannot tell the difference between the pigs and the humans.

What people did not realize when the book was first published was that Orwell had the main animals in Animal Farm represent real people. Mr. Jones, the original owner of the farm, is mean, rarely sober, and signified the old government before Stalin. He would be Czar Nicholas ll, who was the last of the Czars. Old Major is a metaphor for Karl Marx. After his death, Old Major’s ideas that he preached of are drastically distorted when Napoleon and the other pigs begin to dictate. The pigs feed off of his ideas and inspirations and then use them to benefit only themselves. This is similar to when Stalin snubbed Marx’s political and social theory. Napoleon, the chief villain of the book, symbolizes Stalin. He shows what can happen to a society when the leader becomes power-hungry and full of greed. Napoleon lives in luxury while the commoners suffer, becoming more or less a dictator in the end, parallel to Stalin. Squealer is Napoleon’s personal manipulator and persuader. He somewhat correlates with the Pravda, which was the Russian newspaper of the 1930s. He spews propaganda and is the link between Napoleon and the other animals. Snowball represents Leo Trotsky, idealist, and rival of Stalin. Snowball is in constant disagreement with Napoleon and Napoleon’s private police force of dogs rid Snowball from the farm, equivalent to when Trotsky was expelled to Mexico.

Many of the other animals have a purpose too. The hardworking animals, such as Boxer and Benjamin, represent the labor class of Russian society. The lower class was especially drawn to Napoleon, or Stalin because they think they benefit the most from his system. They never experienced a good life before, so the life they have now is no different to them and they cannot imagine anything better. The importance of this lower class is shown when Boxer suddenly falls, hurts himself, and is unable to move and suddenly, there’s drastic decrease in work getting done. The pigs represent the communist party loyalists. They enjoy the benefits of the society they control, living unbothered and in luxury. They really express the unfairness and hypocrisy that comes with communism. The dogs that serve Napoleon are parallel to the KGB, the main security agency for the Soviet Union at the time. They cannot speak for themselves because they are mindless robots, completely dedicated to Napoleon, or Stalin. The pigeons symbolized Soviet propaganda directed to other countries. Other nearby farms become suspicious when their own animals begin to sing along to ‘Beasts of England’, similar to when western governments had problems with their own people supporting communism. The fear of communism became a phobia.

Many important themes come up throughout Animal Farm, just a couple being corruption and deception. Corruption shows when the inches that Napoleon and the pigs take become miles. They completely lead the other animals away from their original ideas. Deception also appears quite a bit. Napoleon, Squealer, and the other pigs deceive the animals and constantly bend history, tricking them into thinking that something that never happened, happened. Napoleon used a great deal of deception when speaking of Snowball. These themes and many more all stem from communism.

Animal Farm is a renowned book that really breaks down and studies the Soviet Union and the Russian Revolution. It is an allegory for sovereignty. It is a warning sign and depicts the dangers of a greedy, power-hungry government. Animal Farm gets at the nature of totalitarianism and shows how much power can corrupt ideals. 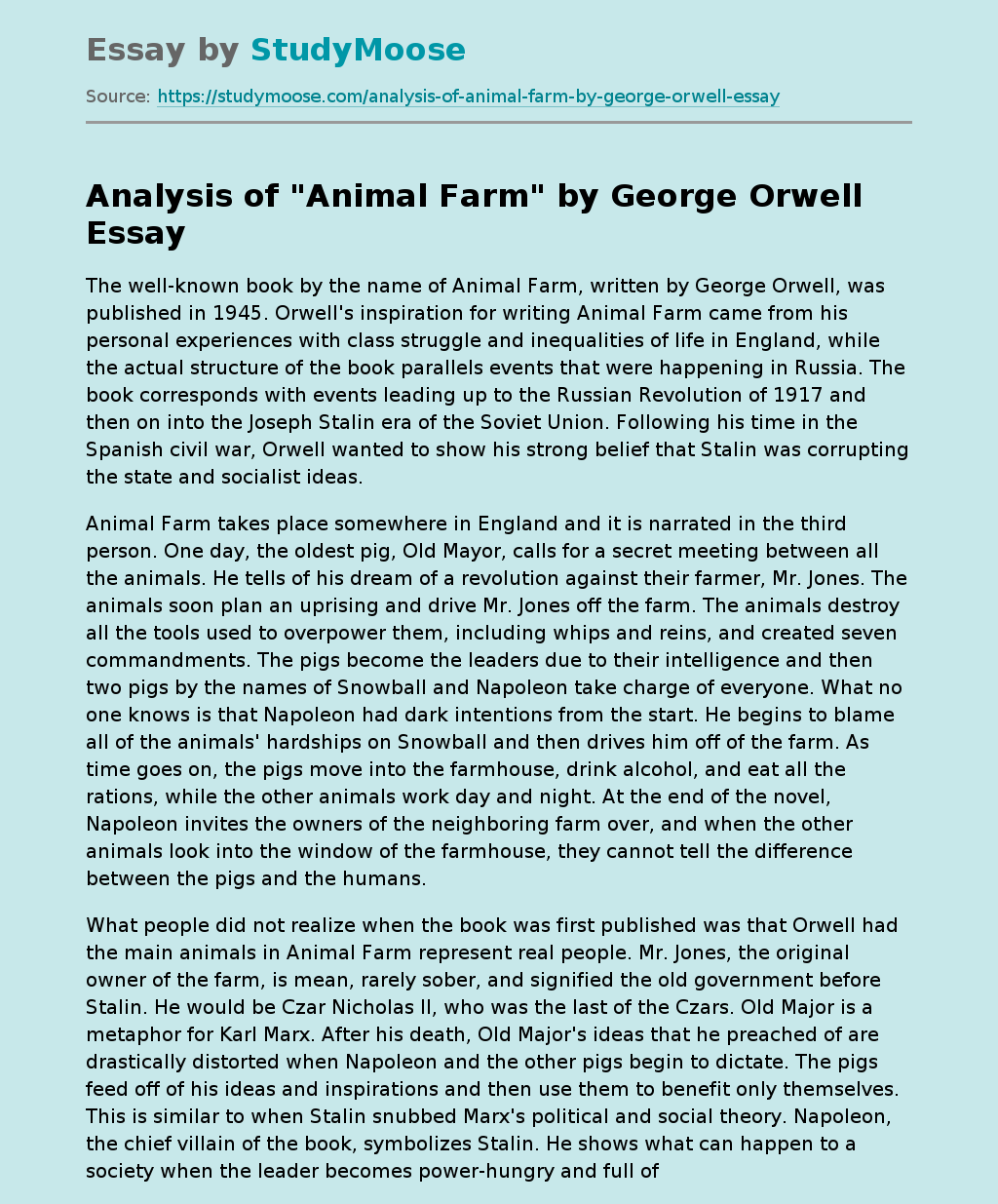