Animal Farm by George Orwell is a compelling book that represents the Russian revolution.

Although viewing through the eyes of animals may seem like a childish concept, George does well into making sure that the book carries out the message of revolution. I, t believe that George showed that Animal Farm was influence of the Russian revolution by the naming of the naming of the three pigshe condition of the farm, and because of the story’s plot.

Many of the animals in Animal Farm show some sort of connection with the Russian revolution. Most animals either represent a group of people, or an in/famous person. As the story starts to evolve from the rebellion to the Battle for the Windmill, the reader notices how the animals start to change. When Mr. Jones gets expelled for the farm, 3 smart pigs take of the farm: Squealer, Snowball, and Napoleon. These three animals all represent dictators the had a part in the Russian revolution. The most significant part about the names given to the pigs is that they all symbolize the dictators perfectly. Napoleon was a tough, fierce looking boar but was not much of a talker. This would symbolize Vladimir Lenin., the man who took the place as dictator after Tsar Nikolas II stepped down. Squealer’s name was the identity of Joseph Stalin, the man who kept on “stalling” the people by giving quick, persuasive speeches on how Lenin was improving the country. Snowball is then given to Trotsky because like Snowball, Trotsky split up with Lenin.

In Animal Farm, these three pigs basically reenact what took place during the Russian revolution: betrayal, propaganda, and communism. Perhaps the best device Orwell used here was how he portrayed the three dictators as pigs, which shows how the name and appearance of the characters in this book are significant and related to the revolution. A reason I believe Animal Farm is about the Russian Revolution, was the choice of naming for the pigs

During the whole book, Animal Farm was in very poor condition. During the beginning, Manor farm was a horrid place to live: with little food and lots of work everyday, it portrayed what Russia looked like during the time of revolution. Only during the early stages of the revolution was the economy slightly better than once before. Each time that Orwell describes the farm, it is always in a different condition, one which usually matched the condition of Russia. When Napoleon was ruling, the farm was in great economic trouble: the animals were always hungry while the pigs and dogs had enough to eat. This shows that the economy did not actually improve the animal’s lives, but instead started to benefit the other, higher members of society which is exactly what the Russian revolution resulted in. The condition of the house was a symbol of Russia’s state which shows how Animal Farm is connected with the Russian revolution.

The final way that Orwell connects both Animal Farm and the Russian revolution, was by the plot of the story. During the entire book, all of the events that took place had at least some little significance with the Russian revolution. When Napoleon oppressed the animals by killing them, it was portraying what was known as Bloody Sunday. At the beginning of the novel, when Old Major is giving the speech about rebellion, it was all inspired by the old man known as Karl Marx. Even the event in which Mollie leaves shows the connection between the two. The easiest event to determine the the two, was most likely the scene were Boxer is taking away. If you think back to the revolution and back to Boxer’s motto ( I will try harder), you can easily see the Boxer is representing Russia’s working class. Because Russia’s working class was so loyal to Napoleon, most of them ended up for worse then before, and even worse, is the fact that Napoleon tossed away these people as if they were tools. The exact same can be said for the Russian revolution. Lenin abused his people and Orwell demonstrates it very clearly and profoundly.

I believe that George showed that Animal Farm was influence of the Russian revolution by the naming of the naming of the three pigs, the condition of the farm, and because of the story’s plot. By renaming and reassigning of few characters and events, George Orwell has described the revolution into a book that can is comprehensive to both little kids and young adults. 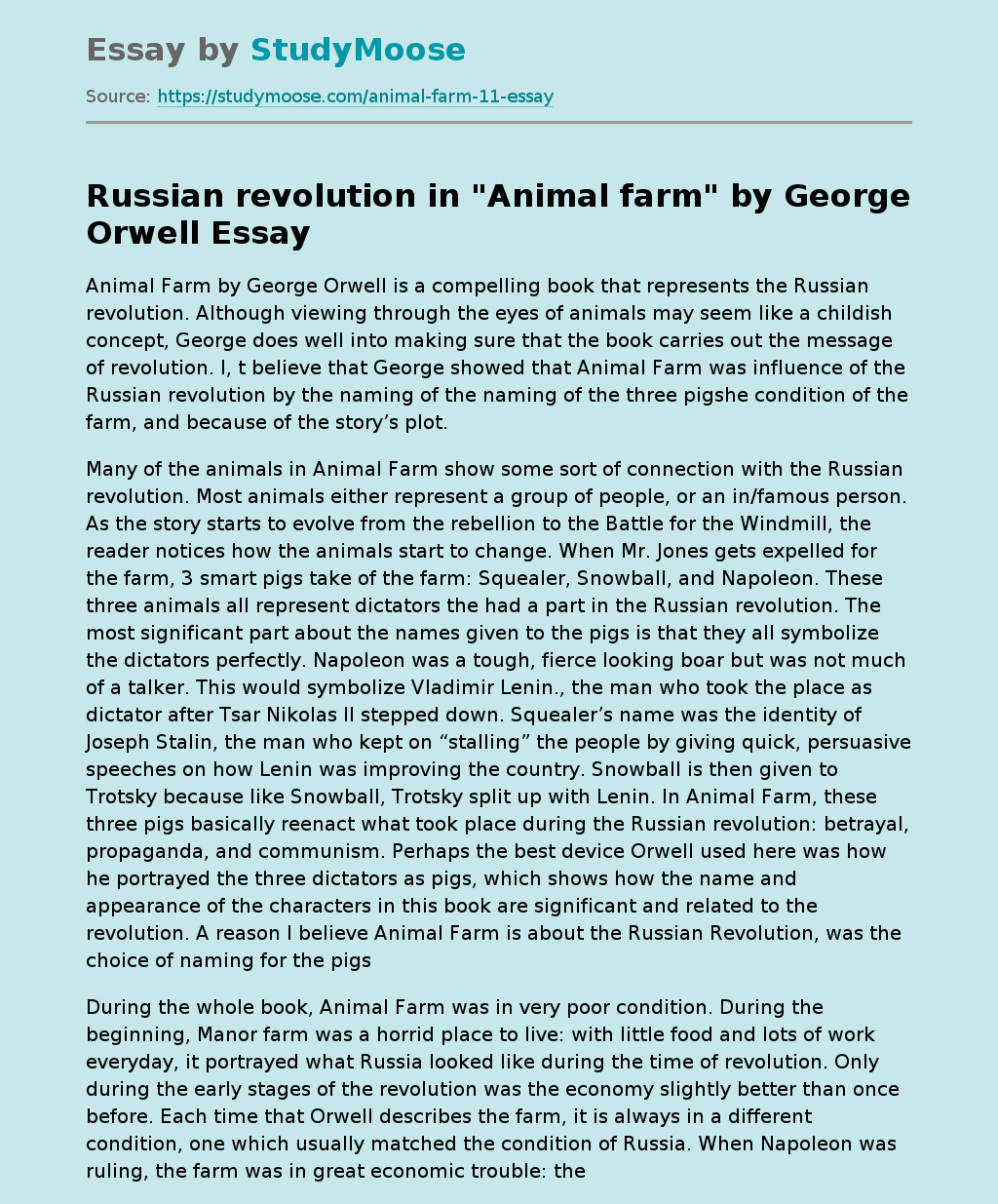