Comparing Propaganda Used in Animal Farm to the Russian Revolution’s Propaganda “Propaganda is a narrowly selfish attempt to get people to accept ideas and beliefs, always in the interest of a particular person or group and with little or no advantage to the public (“What is Propaganda… 2). Propaganda is the spreading of ideas, information, or rumor for the purpose of helping or injuring an institution, a cause, or a person. In the Russian Revolution Joseph Stalin used propaganda to his benefit and used it to usurp the people of Russia.

Don't use plagiarized sources. Get your custom essay on
“ Comparing Propaganda Used in Animal Farm ”
Get custom paper
NEW! smart matching with writer

The first propaganda technique is fear and it is used to scare the animals of Animal Farm. Napoleon uses fear by holding purges in which he accuses the animals of treason and kills anyone who confesses to working with Snowball. In the same way, Joseph Stalin uses fear by holding executions in which he accuses his enemies for crimes and forces them to admit to false confessions and then executes them (Background information…” 4). The executions are called the Great Terror of 1936 to 1939 and millions of people were killed (Joseph Stalin… 1).

Another similarity is how the dogs used fear to force the animals to work and in the Russian Revolution, the secret police forced support for Joseph Stalin. The dogs would also intimidate or threaten any animal who stood in Napoleon’s way.

The KGB or secret police would use force and would kill anyone for disobedience (Lamont, George J. 1). The second propaganda technique that is used is transfer. In Animal Farm, all of the animals are equal and that is what they call Animalism. Likewise, all people are equal in Communism, which is what was used during the Russian Revolution. In Animalism, the Animals own the farm and in Communism, the government owns everything and the people own the government (Lamont, George J. 1). Another similarity is that the raven Moses tells the animals of Animal Farm about a place called Sugar Candy Mountain and that is where all animals go when they die (Orwell, George 17). Allegorically, this represents the Russian Orthodox religion during the Russian Revolution. When the pigs let Moses stay when he returns represents how Joseph Stalin used the Russian Orthodox Church as a way to raise funds for the Russian war effort during World War II (“George Orwell… 1”).

The third and final propaganda technique is pinpointing the enemy. In the book Animal Farm, Mr. Jones is cruel towards the animals and in the Russian Revolution; Czar Nicholas II is brutal with his opponents. Mr. Jones also abused and neglected his animals and Czar Nicholas II would let his people starve and was a bad leader (Lamont, George J. 2). During the Battle of the Cowshed, Mr. Jones tries to regain control of Animal Farm and that represents the Russian Civil War in which the Western capitalist governments sent soldiers to try to remove the Bolsheviks from power (George Orwell Links… 1). Another example of pinpointing the enemy is how Napoleon blames Animal Farm’s mishaps on Snowball and told the animals that he was the enemy.

In the Russian Revolution, Joseph Stalin feared that the Trotsky supporters would try to assassinate him and he was also afraid of Trotsky gaining power. Napoleon thought of Snowball as a threat and drove him off of the farm and that represents Trotsky being exiled to Mexico (“Background information… 16”). Then Joseph Stalin shunned Trotsky from the Soviet Union and then eventually had him killed (“Joseph Stalin… 1”). Fear, transfer, and pinpointing the enemy are the three propaganda techniques that were talked about in this research paper.

Fear is used to make a particular action occur or a consequence will result of disobedience. Transfer is used to make an attempt to make the subject view a certain item in the same way as they view another item to link the two subjects in the mind. Pinpointing the enemy is used to resolve a conflict by presenting a person or group as the enemy. Therefore, the propaganda that was used during the Russian Revolution and Animal Farm had greatly impacted the people of Russia and the animals of Animal Farm. 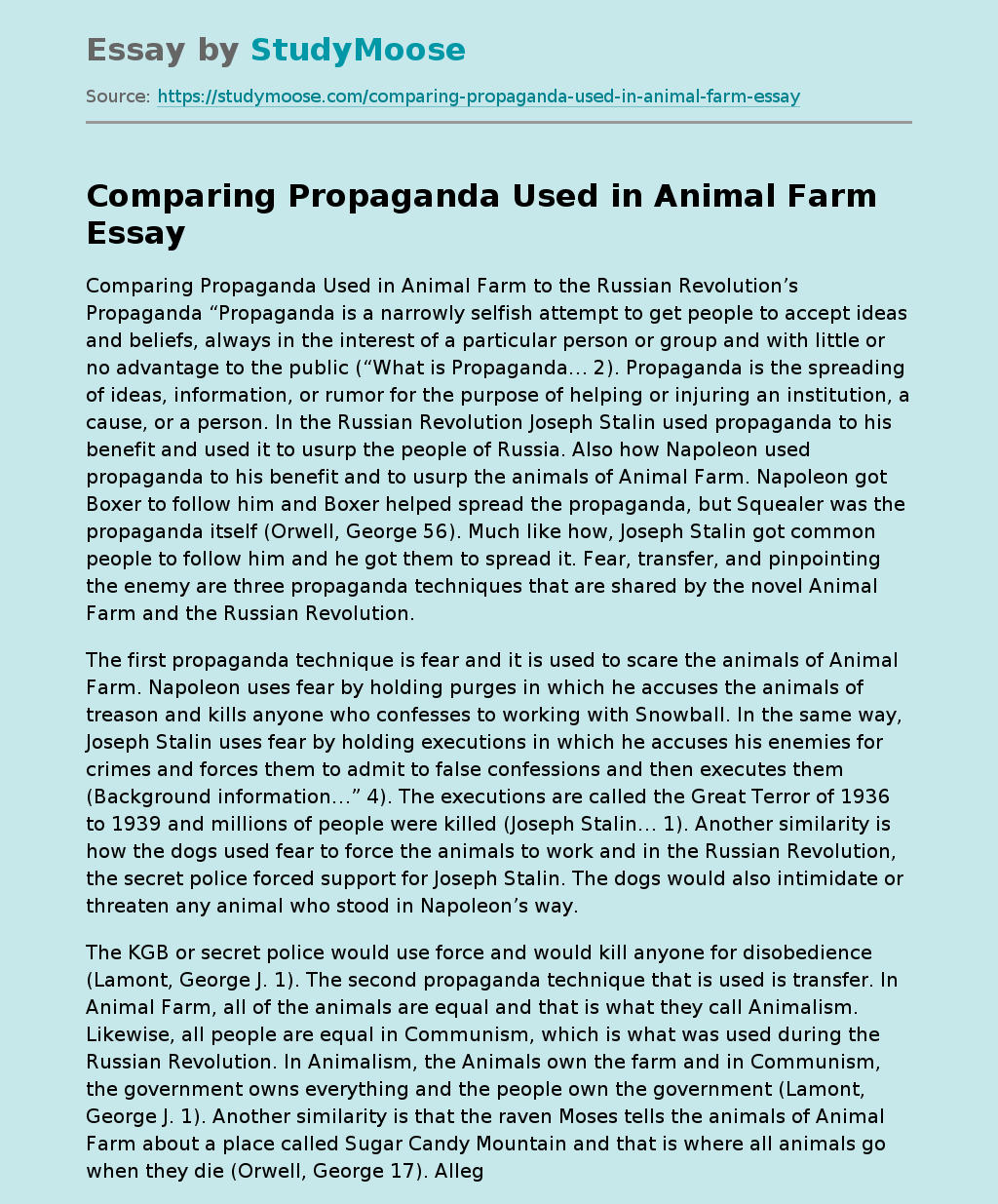