Good and Evil in Lord of the Flies and Animal Farm

Good and evil themes, in some form, exist in practically every piece of literature ever written. It is found in literature as old as the Bible to newer stories such as The Hunger Games. It is no surprise to find this same theme in Lord of the Flies by William Golding and Animal Farm by George Orwell. Golding and Orwell explore good and evil to show what effect morality, or the lack thereof, has on society. Both Golding and Orwell believe through their own past experiences that evil corrupts people.

Don't use plagiarized sources. Get your custom essay on
“ Good and Evil in Lord of the Flies and Animal Farm ”
Get custom paper
NEW! smart matching with writer

To portray this, Orwell and Golding use similar ideas with their characters and plot to show how fragile the idea of civilization is for us all. In Lord of the Flies and Animal Farm, the theme of evil is obvious throughout the development of the characters. In Lord of the Flies, the primary character, Jack, is truly evil. Jack is a brutal boy and he performs many violent acts during his quest for power.

The best example of this is when Jack encourages his tribe to participate in the slaughtering of the angelic Simon (Golding, 140).

While the tribe is having a wild, demonic ceremony, Simon crawls out of the woods disorientated after suffering a seizure. Mistaking Simon for the beast, the crazed tribe, including Ralph, brutally rips Simon apart with their bare hands and teeth. Simon falls off of the cliff and onto the beach below, where his body washes out to sea. In comparison, evil is also prominent in the story Animal Farm.

The character Napoleon is the essence of evil in Animal Farm. He is the very manipulative and dictator-like leader of the farm.

Squealer then elaborates even more and says to the animals that “it is for YOUR sake that we drink that milk and eat those apples… Jones would come back! ” (Orwell, 32). These reasons are not true, as Napoleon just wants the milk and apples because he finds them tasty and not because he needs them to manage the farm. Meanwhile, the other farm animals are left to go hungry. In an effective display of pure evil, Orwell and Golding are able to use Napoleon and Jack as villainous characters in an effort to show what happens to someone with no morals.

In contrast, themes of goodness are harder to find, yet evident in the characterization of Lord of the Flies and Animal Farm. In Lord of the Flies, Simon is the epitome of morality. For example, he appears Christ-like as he helps the more vulnerable children of the tribe that the older boys call the Littluns. Simon helps the Littluns by performing tasks that they cannot do, such as “picking choice fruit from branches they cannot reach” (Golding, 50). In comparison, Animal Farm also has characters that reflect merit. Specifically, Boxer is one character that shows his goodness through his actions.

For example, in the Battle of the Cowshed, he sees his fellow animals being injured, so he stops the fighting by kicking a stable-lad in the head. As a result of Boxer’s actions, the humans flee (Orwell, 36). Although Lord of the Flies and Animal Farm are both predominately full of evil themes, Golding and Orwell use themes of goodness in the characterization to give the reader hope that good just may prevail. Besides the themes of evil found in characterization, there are also the themes of evil in the plot elements of Lord of the Flies and Animal Farm.

Towards the end of Lord of the Flies, Simon is murdered by the rest of the boys (Golding, 142). Simon’s death is specifically the point when the evil in the story triumphs over good . Up until the point of Simon’s death, Ralph and Simon are the only characters who still have good left in them. Since Ralph participates in Simon’s murder, all of the good that exists in Ralph is gone and the last of civilization dies with Simon. A similar evil is present in Animal Farm when Napoleon tortures and executes “traitors” of the farm. The animals that are accused of treason are tortured until they admit to their crime.

Once they confess, they are executed (Orwell, 69). Most of the time, these animals are not even guilty. The animals live in a constant fear; they do not know when or if they will be accused of treason and then executed. By using themes of evil, both Golding and Orwell show that a lack of morality in society may eventually result in the collapse of civilization. In the same way, themes of good appear in the plot elements of Lord of the Flies and Animal Farm. Specifically, there is a time when Jack refuses to give Piggy any meat. Simon gives Piggy his share because he believes that it is unfair that Jack did not give Piggy any meat.

When Simon does not give Jack the satisfaction of eating his meat, Jack then gets extremely angry with Simon and throws meat at Simon’s feet yelling “Eat, Damn you! ” (Golding, 68). Simon still refuses to eat the meat. By his actions, Simon shows that even though they were living in uncivilized times, they could still remain kind to each other. Just like Lord of the Flies, Animal Farm also has themes of goodness in its plot elements. In particular, Old Major creates a spirit of kindness and enthusiasm at the farm during his famous speech. He uplifts the animals by singing them a song entitled “Beasts of England”.

The song is about animals breaking free from human control and living independently. Old Major continues to show his concern for his fellow animals when he says in his speech that “all animals are equal” (Orwell, 11). As a result of Orwell and Golding using goodness in the plot elements of Animal Farm and Lord of the Flies, they are able to illustrate their point that one can choose to be kind, no matter their surroundings. Through characterization and plot elements, Golding and Orwell use good and evil in Lord of the Flies and Animal Farm to express their fearful feelings for society.

They believe that if society loses their touch of purity and goodness then society will collapse. In other words, Golding and Orwell’s message to the reader is that it is human nature to sin and perform evil, and if society is not careful, it will eventually lead to the demise of civilization. Works Cited Orwell, George. Animal Farm;. New York: Harcourt, Brace, 1954. (11, 24, 32, 36, 69). Print. Golding, William. Lord of the Flies. New York: Coward-McCann, 1962. (50, 68, 140, 142). Print. View as multi-pages

Good and Evil in Lord of the Flies and Animal Farm. (2016, Nov 12). Retrieved from https://studymoose.com/good-and-evil-in-lord-of-the-flies-and-animal-farm-essay 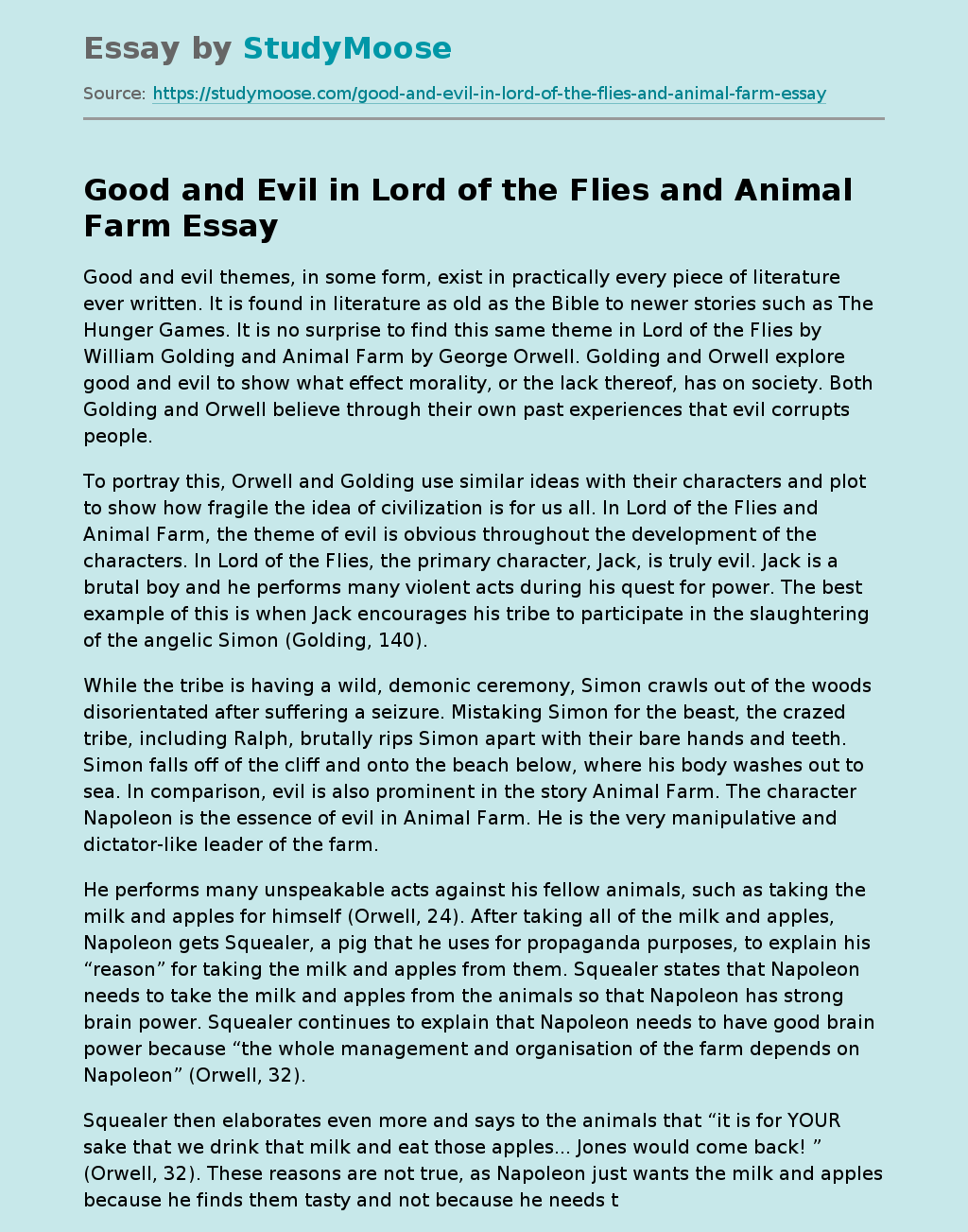