Inherent Good and Evil in Lord of the Flies

The Lord of the Flies by William Golding is tale of a group of young boys who become stranded on a deserted island after their plane crashes. Intertwined in this classic novel are many themes, most that relate to the inherent evil that exists in all human beings and the malicious nature of mankind. In The Lord of the Flies, Golding shows the boys’ gradual transformation from being civilized, well-mannered people to savage, ritualistic beasts. From the time that the boys land on the island, both a power struggle and the first signs of the boys’ inherent evil, Piggy’s mockery, occur.

Don't use plagiarized sources. Get your custom essay on
“ Inherent Good and Evil in Lord of the Flies ”
Get custom paper
NEW! smart matching with writer

After blowing the conch and summoning all the boys to come for an assembly, an election is held. “I ought to be chief , said Jack with simple arrogance, because I’m chapter chorister and head boy”(Golding 22). After Ralph is elected Chief, Jack envies his position and constantly struggles for power with Ralph throughout the rest of the novel, convincing the rest of the boys to join his tribe rather than to stay with Ralph.

Also, soon after the boys arrive at the island, Piggy, a physically weak and vulnerable character, is mocked and jeered at by the other boys.

After trying to recount all of the liluns’ names, Piggy is told to “Shut up, Fatty,” by Jack Merridew. Ralph remarks by saying, “He’s not Fatty. His real name’s Piggy. ” All of the boys on the island, except for Piggy, laugh and make themselves more comfortable at Piggy’s expense.

“A storm of laughter arose and even the tiniest child joined in. For a moment the boys were a closed circuit of sympathy with Piggy outside. “(Golding 21). The boys instinctively become more comfortable with one another after Piggy’s mockery and create a bond, leaving Piggy on the outside.

While Jack and Ralph are exploring the island, they encounter a piglet which Jack supposedly attempts to kill. After gaining the courage to kill the baby pig, Jack rectifies the situation by saying “I was just waiting for a moment to decide where to stab him (Golding 31). ” This event clearly illustrates that along with inherent evil, “man is [also] capable of being good and kind, and has to choice and free will to choose which one he will become. “(Ridley 97) Jack’s mercy is short-lived, however, and when they encounter another pig, Jack and his hunters are relentless.

They return to beach ritualistically chanting “Kill the pig. Cut her throat. Spill her blood,” where they excitedly explain the details of the hunt. “I cut the pig’s throat,’ said Jack, proudly, and yet twitched as he said it (Golding 69). Jack is internally struggling between his civilized teachings and savage instincts in this example, in which he both proudly exclaims his murder and twitches while doing so. Another example of the boy’s inherent evil is the brutal murder of the sow. Without any regard for the sow’s newborns, Jack commands his tribe to attack it.

The boys “hurled themselves at her. This dreadful eruption from an unknown world made her frantic; she squealed and bucked and the air was full of sweat and noise and blood and terror” (Golding 135). The animalistic behavior of the boys frightens the sow, and the reader as well. After the death of the sow, the boys play with its blood and ritualistically celebrate their kill. Jack “giggled and flicked them while the boys laughed at his reeking palms. Then Jack grabbed Maurice and rubbed the stuff over his cheeks” (Golding 135). The boys show no mercy for the sow and behave like savages.

The murder of the sow allows the boys to “revert back to [their] primitive instincts” (Garbarino 96) and lose all traces of guilt and conscience. In the novel, Ralph and Piggy represent intelligence, reason, and a government. They also try to abstain from resorting back to their primitive instincts and use reason to try and convince the other boys to do the same. “Which is better- to be a pack of painted Indians like you are, or to be sensible like Ralph is? “(Golding 180) states Piggy. The boys’ crazed reaction to Piggy’s question illustrates Piggy’s point about the civility of himself and Ralph, compared to Jack and the rest of the tribe.

Many times throughout the book, Piggy is the voice of reason and helps to guide Ralph along that same road if he loses his way. After scolding Samneric for being pessimistic about their fate, Ralph momentarily forgets the reasons why the signal fire is so important. “He tried to remember. Smoke, he said, we want smoke. Course we have. Cos the smoke’s a signal and we can’t be rescued if we don’t have smoke. I knew that! Shouted Ralph” (Golding 172). Ralph begins to lose his initial cheerfulness and enthusiasm and replaces it with disinterest and pessimism.

Piggy and Ralph separate themselves from Jack and his tribe and continue to maintain their “government”. However, when Jack and his tribe kill a pig and invite Ralph and Piggy to join their feast, the two accept and cannot resist the temptation of the meat. Later on in the celebration, Jack and his tribe perform a ritualistic dance, in which Piggy and Ralph later join. “Piggy and Ralph, under the threat of the sky, found themselves eager to take a place in this demented but partly secure society” (Golding 152). They realize that the dance fueled the boys to murder Simon, and later deny their participance in it.

“We left early, said Piggy quickly, because we were tired” (Golding 158). Ralph and Piggy recognize the evil in the dance, and know that if the others found out about their participance in it, then the boys would claim that Piggy and Ralph would be going against their own beliefs. Also, by not admitting their partaking in the dance, Piggy and Ralph are denying their involvement in Simon’s murder and their inherent evil. They do not believe that evil exists within them and believe that it will “disappear” if they do not believe in it.

The Lord of Flies says that the beast is not a physical manifestation that is in the form of an animal that can be hunted and killed, but resides inside the souls of the boys on the island. The Lord of the Flies even says that the Beast is part of Simon, the symbol of goodness, suggesting that all human beings are born with both some evil and goodness. Later on while Ralph is fleeing from Jack and his tribe, he stumbles upon the Lord of the Flies. “Little prickles of sensation ran up and down his back. The teeth grinned, the empty sockets seemed to hold his gaze masterfully and without effort” (Golding 185).

All of the boys on the island are tempted by evil, but not all of them give in to the craving. However, along with the evil that lies within all people, there is also a tinge of goodness, suggesting that all people have the free will to choose their destiny. The boys’ struggle between their anarchic driving force, and Ego, their sense and rationale, represent the ongoing feud between good and evil and is both exciting and emotional. The Lord of the Flies is a superbly written novel that will remain in the hearts of all who read it, and affect all who encounter it, much like the evil which it describes.

Inherent Good and Evil in Lord of the Flies. (2016, Nov 12). Retrieved from https://studymoose.com/inherent-good-and-evil-in-lord-of-the-flies-essay 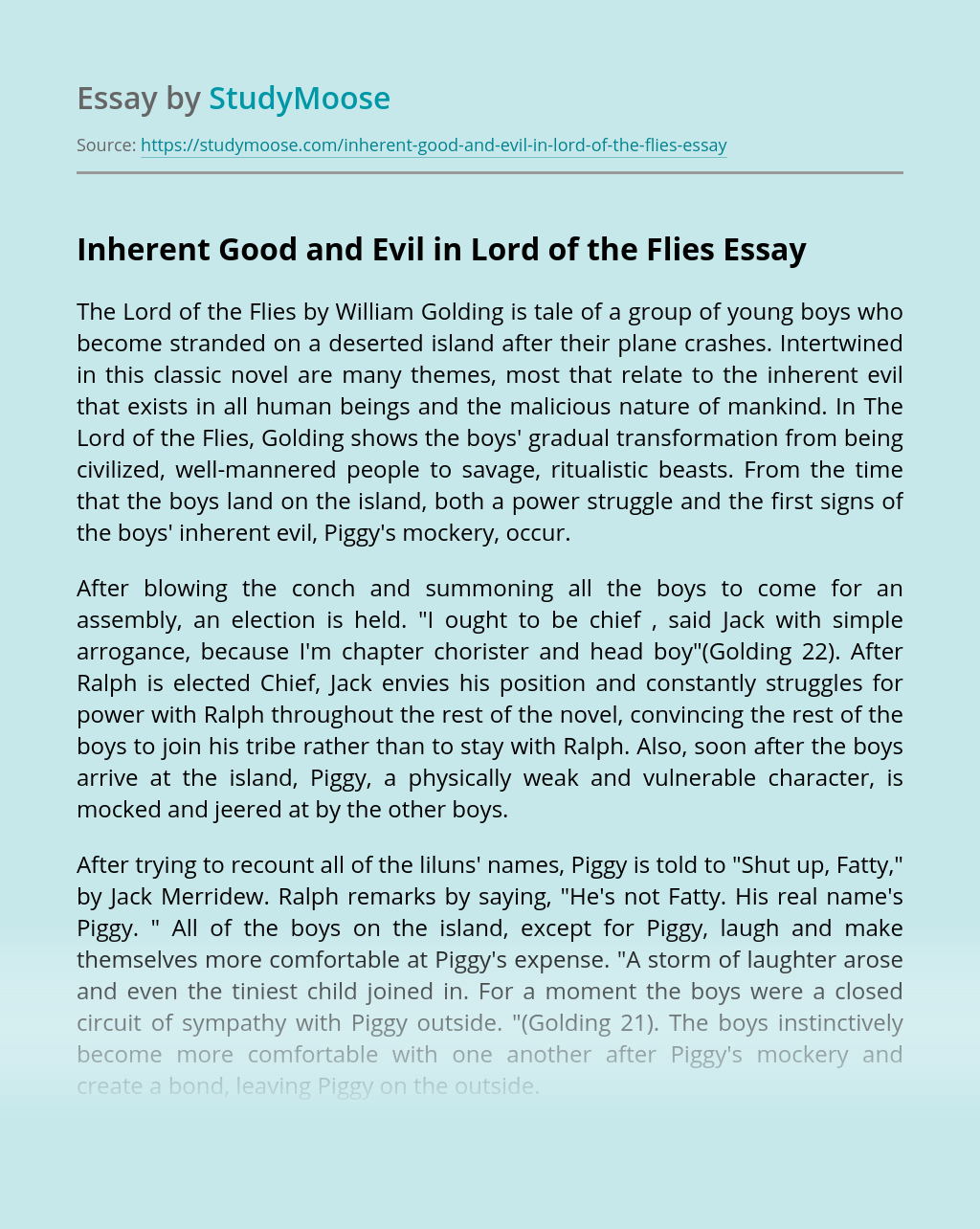