Inner evil in Lord of the Flies

Throughout literature we have seen different characters struggling with their inner evil. That inner evil can be brought out by a trigger incident or environment which drastically affects a character’s nature. In the Lord of the Flies, being marooned on the island brings out the evil and savage side in the children. It is shown through their disregard for social norms, merciless killings, and lastly turning on each other.

Don't use plagiarized sources. Get your custom essay on
“ Inner evil in Lord of the Flies ”
Get custom paper
NEW! smart matching with writer

In Lord of the Flies, the boys let out their inner beasts by showing no regard for social norms, remorseless killings and turning on each other.

At the beginning of the novel they did not lose sight of social norms. As they find that they are alone on the island, no adults anywhere, they realize the importance of democracy and order in a place where there are no rules. “I agree with Ralph. We’ve got to have rules and obey them after all, we’re not savages… ” (Golding, 47) This statement is said by Jack, who is addressing the crowd of boys during an assembly.

This statement shows that in the beginning before any talk of a “beastie”, they understood that they needed some order, some form of government that would provide them with safety and tools for survival.

Jack’s words later prove ironic because he is the one to disobey Ralph and turn his back on the rules. By ignoring the rules and their government, he leaves the civilized tribe to form a tribe with the demented rules of the wild.

As the story unfolds, they slowly move away from their government. “You see Ralph your conch doesn’t work on this side of the island” (Golding, 195). The symbol of their democracy is the “talisman, the fragile, shining beauty of the shell. ” (Golding, 200) It was used to call together the boys to hold an assembly to discuss the troubling issues being made clear by Jack’s hunters.

When Jack says this, he proved that the hold of democracy is fading away as they became more savage. Toward the end of the novel, the democracy is destroyed and nonexistent, and the conch is shattered. “The conch exploded into a thousand white fragments and ceased to exist” (Golding, 200). This moment is very symbolic because it represents the downfall of any sort of order among the children. Without any form of government the laws that had once applied in their homeland, England, have no power on the island, and in turn lead to the boys encountering their inner evils by ignoring those laws.

During the book we see that they develop a fascination and desire with blood and hunting which later lead to shameless killings. First, there is an attempt of killing a pig which drives Jack to hunt again “You cut a pig’s throat to let the blood out,” said Jack, “otherwise you can’t eat the meat. ” “Why didn’t you­? ” They knew very well why he hadn’t: because of the enormity of the knife descending and cutting into living flesh; because of the unbearable blood. “I was going to,” said Jack. He was ahead of them and they could not see his face. I was choosing a place. Next time­! ”… Next time there would be no mercy. ” (Golding, 33-34) After this encounter with the pig, Jack was obsessed with hunting and killing this pig.

When Jack and the group of hunters find a sow with her piglets, they are thrilled. This time it was for more than just food, their killing of this sow was brutish and vicious. It is described “… the sow staggered her way ahead of them, bleeding and mad, and the hunters followed, wedded to her in lust, excited by the long chase and the dropped blood. “The sow collapsed under them and they were heavy and fulfilled upon her. ” (Golding, 149) This sow was a symbol of an innocent being killed, she was a mother. She had children to look after, and the hunters deprived the piglets of their mother. The killing of Simon was done out of fear of the beast and in the darkness of the night. “At once the crowd surged after it, poured down the rock, leapt on the beast, screamed, struck, bit, tore. There were no words, and no movements but the tearing of teeth and claws. (Golding, 168)

The imagery used in this chapter is that of an animal, by using teeth and claws to describe how cruel this killing was, showing that they have truly becoming animal like and savage. Through this event it seems as they grow more savage they become a little more afraid and desperate. The murder of Piggy is not as violent as that of the sow and Simon. “Piggy fell forty feet and landed on his back across hat square, red rock in the sea. His head opened and stuff came out and turned red. Piggy’s arms and legs twitched a bit, like a pig’s after it was killed. (Golding, 200) Piggy was killed by Roger, who was throwing rocks, which knocked him off the cliff.

The savage tribe ignored what Piggy had said about choosing sides, “Which is better – to be a pack of painted [Indians] like you are, or to be sensible like Ralph is…. Which is better – to have laws and agree, or to hunt and kill? ” (Golding, 199) By Piggy saying this, it got Roger upset, because he had critized his chief and their tribe. When Roger was a part of the civilized tribe, he conditioned his arm to shoot and miss “Yet there was a space round Henry, perhaps six yards in diameter, into which he [Roger] dare not throw.

Here, invisible yet strong, was the taboo of the old life… Roger’s arm was conditioned by a civilization that knew nothing of him and was in ruins. ” (Golding, 67) As he became more savage, he had lost the conditioning and the restraint he once had to hurting someone, which is shown through his actions. They were fearful, ignorant, and desperate and with that comes violence, they felt no remorse for their actions only pride and hatred. This also proved that through killing they let out their inner beast.

In the beginning, they are not physically turning on each other, they used verbal abuse to belittle those who are younger or had no power. There are three groups of people who are frequently abused, the “littluns”, Piggy and Simon. Piggy was the major victim, Jack and the rest of the children would frequently name call him, tease him and laugh at him. “Oh, shut up! ” “I got the conch,” said Piggy, in a hurt voice. “I got the right to speak” (Golding, 49) they found him amusing, for they felt he spoke of nonsense.

Jack, as chief, decided to tie up Wilfred and beat him. “He’s going to beat Wilfred. ” “What for? ” “… I don’t know. He didn’t say. He got angry and made us tie Wilfred up. He’s been”-he giggled excitedly-“he’s been tied for hours, waiting-. ” For no apparent reason, Jack wanted to torture Wilfred, maybe to reassert himself as chief and gain more followers. The last example of turning on each other in Lord of the Flies is the burning of the jungle to trap and kill Ralph. “He swerved as a spear flew past and then was silent, running.

All at once the lights flickering ahead of him merged together, the roar of the forest rose to thunder and a tall bush directly in his path burst into a fan-shaped flame. ” (Golding, 220)In order to capture Ralph, Jack set the jungle alight to draw him out, and kill him. This is also an example of their want to hunt and kill, and in order to be rid of order and civilization Jack had to kill Ralph, but he had not succeed. In order to have peace among the children, they all needed to be supportive and understanding, but they were cruel and hurtful to each other.

This proves that thought their consequential actions, that were both cruel and unusual, turning on one another allowed the children act savage and unleash their inner evil. In the novel Lord of the Flies the children discover their inner evil by forgetting social norms, senseless and remorseless killings and lastly by turning on each other. Thought a series of events the children show these qualities that prove once and for all that all people, young and old have the ability to be savage and evil. In this particular novel, these boys encounter their inner evil by the influence of fear, ignorance, and desperation. 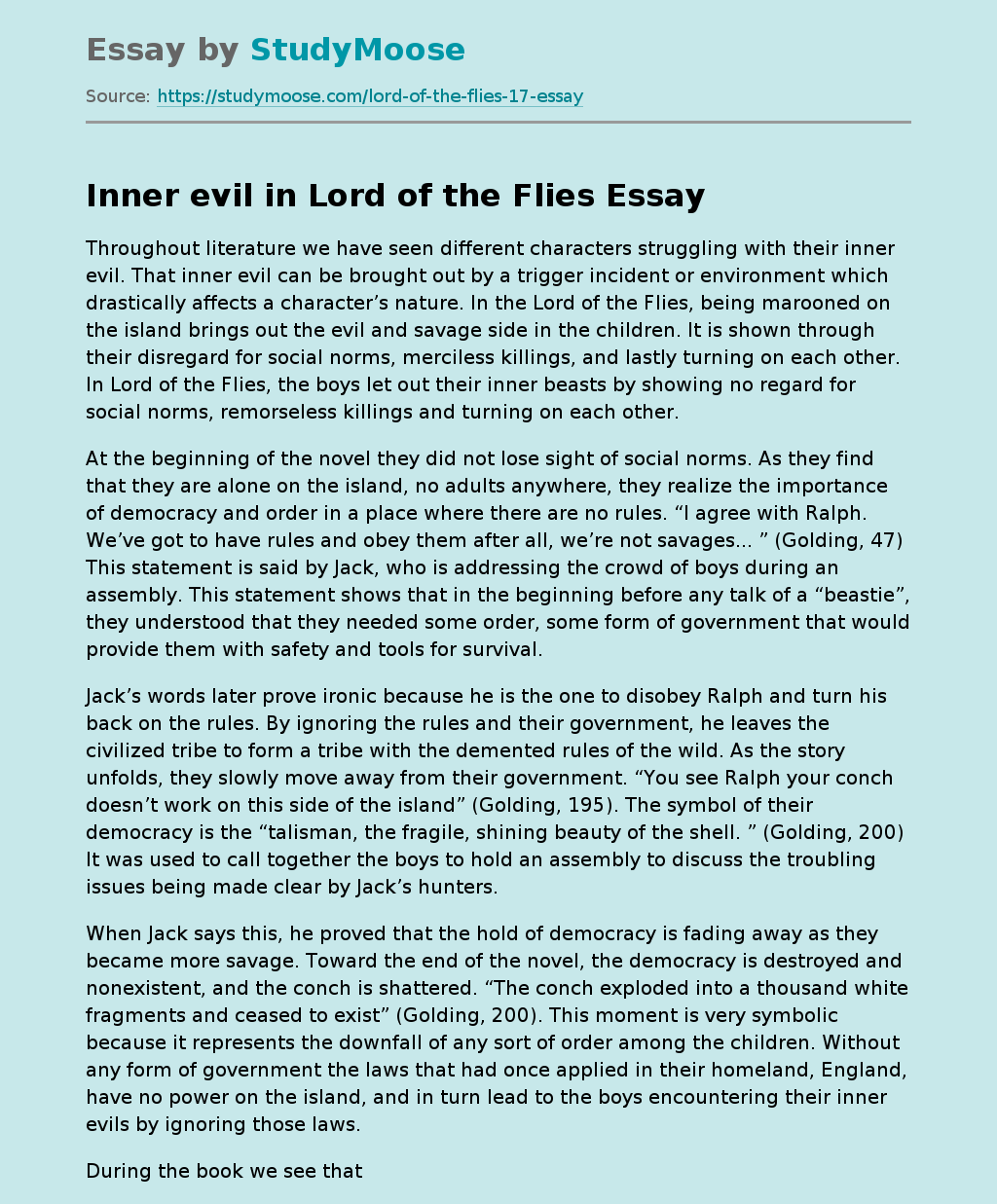