Good Versus Evil in Lord of the Flies by William Golding

Within the fictional novel, ‘The Lord of the Flies’, author William Golding effectively illustrates the idea that evil is persistent within all mankind. This skewed view on humanity drives the story to highlight the chaos and disarray within each young boy as they face an uninhabited island. Throughout the passionate scenes in the fight for survival, William Golding conveys the story through narrative allegories, dynamic imagery, and powerful foreshadowing. The book, ‘The Lord of the flies’, falls into the late 1900s modernism literary movement in which experiences are more concrete than hypothetical principles.

Don't use plagiarized sources. Get your custom essay on
“ Good Versus Evil in Lord of the Flies by William Golding ”
Get custom paper
NEW! smart matching with writer

The overarching theme of Lord of the Flies is a Good vs. Evil theme which is also in “Strange Case of Dr. Jekyll and Mr. Hyde” by Robert Louis Stevenson. This theme of Good vs. Evil is easily viewed as an allegory about the good and evil that exist in all men, and about our struggle with these two sides of the human personality. Dr Jekyll (strange case of Dr.

Jekyll and Mr. Hyde) and Ralph (Lord Of The Flies) are similar in the way that they are both the good side of the characters.

Ralph shows his goodness by caring for others when he states “What about the littluns? Someone’s got to look out for them.’-Ralph (pg. 101) and Dr. Jekyll’s goodness is seen by him trying to keep Hyde’s evil personality out of him. Then there is Mr. Hyde (a strange case of Dr. Jekyll and Mr. Hyde) and Roger (lord of the flies) who both represent the evil in each writing.

Roger loved being cruel to the Littluns and he also killed Piggy. With this act of murder, it makes it clearly show his evilness. Compared to Roger is Mr. Hyde, who also violently killed someone named Sir Danvers Carew. A good vs evil theme can easily be seen in both “strange case of Dr. Jekyll and Mr. Hyde” and “lord of the flies” with the similarity in the characters personalities and their actions. Throughout the story, there is a persistent level of symbolic meaning that contributes to the traumatizing trail of events that perpetually occur. Many of the characters contribute to the allegory in ways that expand and add underlying depth to the story. Thirteen-year-old Simon acts on a morally good compass. His kindness and goodwill symbolize him as a “Christ-like” figure throughout the novel.

In contrast to the kind and gentle spirit of Simon, Jack Merridew is all about domination. He wants to be in charge, ruling over the boys in an autocracy manner. Being the most powerful and persistently leading due to his past roles in leadership during his short inexperienced life. Jack symbolizes and effectively represents the evil in mankind as he is properly portrayed in the book as savagery. Ralph, however, has an entirely different approach. He believes and stands for democracy in which each of the young boys may have a voice in the survival approach and attempt at civilization. Ralph seems to have the most logical approach throughout the story, which is why he symbolizes order and group leadership. Lastly, the character Piggy seems to withhold much of the intelligence in the group. He is consistently portraying the need for order and great knowledge by protecting and using the conch. When the boys crash and find the conch shell laying on the shore, it is used to reconnect and locate all of the boys, the conch then also becomes a symbol itself. Piggy and the conch together symbolize a type of civilization and awareness of surroundings. The imagery throughout the novel contributes to the reader’s idea and unique self-created picture on what is occurring and the level of intensity of the situation. The young, immature boys are left bringing destruction and violence to the originally untouched island. From the start, the moment the plane crashed, Golding uses the image of a “scar” left in the greens of this paradise; an image of hurt and ruins. Much of the imagery is seen as the disturbing wreckage of the island, the waters they bathe in are “warmer than blood” and the boys leave ample of wounds and “gashes in the trees” as they travel. The vibrant and dynamic imagery through the story displays the destruction occurring in paradise due to the boys inhabiting there. The imagery presented adds depth and value to the story, where evil is adequately displayed and destruction is striking.

Multiple instances in ‘Lord of the Flies’ demonstrates foreshadowing and hinting at things later in the book. One of the main foreshadowing examples in the novel in the conch shell that piggy finds laying on the beach. He is thrilled and amazed at this find, constantly reminding the others that the conch is valuable and will be largely helpful to the boys, which is portrayed to be true later in the story. The shell is then later used as a source of communication, helping with order and the prevention of chaos. Another instance of foreshadowing in the novel is the constant mention that the “fire is the most important thing on the island,’ in which it is a resource to help get rescued, cook themselves food and a source of warmth and heat. At the first shot at creating a fire, it burns out of control, thrusting out a “savage arm of heat that crinkled hair on the instant”. This destruction of the fire is foreshadowing the destruction of the island made from the boys.

The foreshadowing throughout the novel is used as a sign of warning or as a sign of upcoming events and relevance to certain items and particular actions within the book. This literary movement of Modernism came about in the late 19th century and is a traditional way of writing in both poems and fiction writings. It came from the previous Victorian period that had a break with tradition which was very important to Victorians. Many writers noticed the world moving away from the Victorian era and made the transition towards the new literary movement. Modernism is created by experimentation and individualism which was a result from World War I and the Cold War. History is an important aspect mentioned in many Modernist Novels. In ‘The Lord of the Flies’ you can find the boys in a war which caused their plane to crash due to a bomb. Another important aspect of modernism that is present in this novel is epistemological dominance, which is just the theory of knowledge. This is demonstrated in the novel because all of the characters are eager to know everything so they start to have questions and then everyone slowly gets the answer to those questions.

Many readers have interpreted ‘Lord of the Flies’ in very different ways over the few years since it has been published. During the 19th century, many readings of this novel claimed that ‘Lord of the Flies’ depicts a dramatic view of the history of civilization. While growing up Golding had experienced much of his life in World War II which had an effect on his view of humanity and how it was capable of man evils. He creates in ‘The Lord of the Flies’ a sight of basic human life struggle, to obey rules, be moral, act lawful, and the savage instinct, and commit violence. Through the entirety of this novel, there is a constant battle between civilization and savagery. In ‘The Lord of the Flies’, William Golding proficiently tells a story of the fight for survival through strong allegories, vivid imagery and insightful foreshadowing within the novel. Throughout the time of the modernist literary movement, Golding’s writing teaches us that in order to survive we need rules and enforcement of these rules to have a properly functioning society. Golding also helps us depict that this is a modernist literary movement because of his use of experimentation and individualism with the main characters.

Good Versus Evil in Lord of the Flies by William Golding. (2021, Mar 05). Retrieved from https://studymoose.com/good-versus-evil-in-lord-of-the-flies-by-william-golding-essay 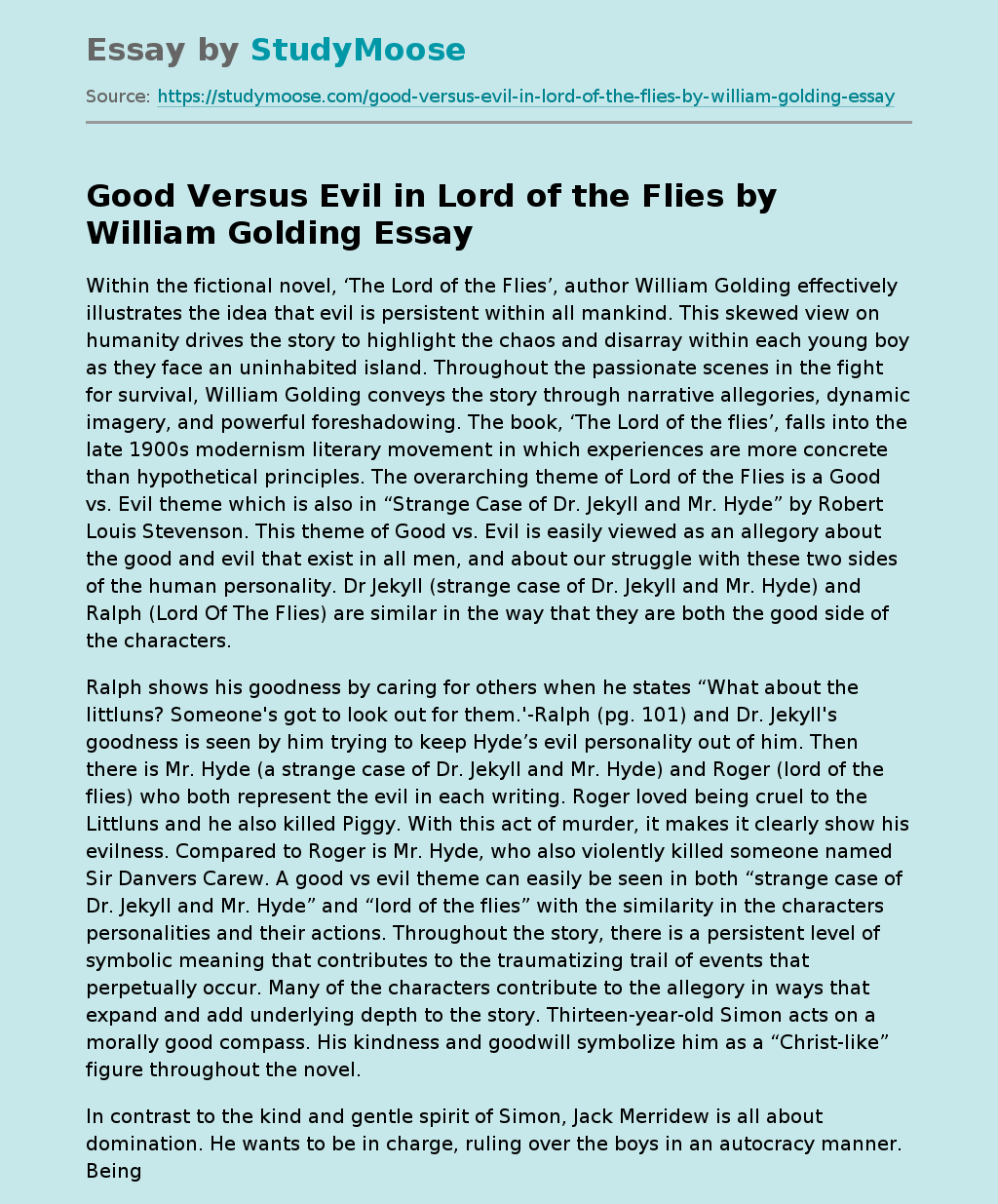