Analysis of "Lord of the Flies" by William Golding

Lord of the Flies by William Golding is a well-mentioned book. Golding writes about a group of boys, deserted on an abandoned island after their plane is shut down fleeing from the wars. The main characters Ralph and Piggy find a conch shell and decides to summon all the boys to an assemble on the beach. Throughout the book, we readers get to follow the group of boys and how they try to survive in the thought that they will be saved.

Don't use plagiarized sources. Get your custom essay on
“ Analysis of “Lord of the Flies” by William Golding ”
Get custom paper
NEW! smart matching with writer

Lord of the Flies shows us a conflict between two instincts, impulse versus reason. How will the boys act in order to survive?

The book is a dystopian novel that shows a harsh reality where children threaten, almost kill and control each other. Even though the boys are rich and on a nice tropical island, Golding displays the inevitable fact that something like this can happen to anyone. During the first days on the island, the boys play games, they are splashing in the water and enjoying life without parents and duties.

Our main character Ralph though he want to survive. He decides to start a fire to be sure that ships passing the island will see them. He makes Jack the head of hunting and starts to build shelters. Ralph becomes the leader of the group and starts deciding what people should do and not do. It will though not take long until the group disappoints his wishes. The fire that was supposed to lure ships closer to the island has burned out.

The littluns (young children) are starting to get afraid, telling their leader that they have troubling nightmares about a monster lurking around on the island. A monster that during the day hides away in the ocean. One night, the boys who are supposed to watch the fire falls asleep, missing the military planes flying above them. After explosions in the clouds, a military parachutist falls dead down to the ground right beside the boys. In the early hours when the boys awaken, they are sure they have met the monster. As the pages are turned the boys in Lord of the Flies encounter more difficulties, conflicts and disputes.

One day the boys decide to go look for the monster of the island. When they see a huge shadow from the parachutist, they believe that it is the monster that has been terrorising them. The leader of the hunters, Jack, who already have a ton of issues with his leader Ralph, has an opinion about Ralph’s acting during the discovery. This leads into a huge fight where Jack leaves the group and takes all of his hunters with him. Day by day more and more boys switch sides, from Ralph to Jack. At last, even Ralph himself does. The boys have left a gift for the monster, a pigs head. The head is described to be dripping in blood and covered in flies. Simon, another character, gets a vision and hears a voice telling him he will never escape the monster. He faints and wakes up left alone. When walking down to the beach again, the new group with Jack as the leader kills Simon brutally with their bare hands and teeth. The following day Ralph and Piggy discuss what they have done when Jack interrupts them. He is not okay with people having opinions about how he does things. This causes Ralph to be ejected by the group. And he knows that Jack is after blood, he knows he will be killed for what he said. To escape Jack, Ralph hides in the forest and Jack gets the bright idea of smoking him out. When Ralph is back on the beach, he faints of exhaustion and wakes up with a naval officer standing over him. They saw the fire and came to rescue the boys.

One important event in this book is when Simon hears this voice. “There isn’t anyone to help you. Only me. And I’m the Beast. . . . Fancy thinking the Beast was something you could hunt and kill! You knew, didn’t you? I’m part of you? Close, close, close! I’m the reason why it’s no go? Why things are the way they are?” (Page 158). The pigs head is covered in blood and flies, on a stick. Me, as a reader, believes that the pigs head is Lord of the flies. This is where the book’s name is from. This quote also confirms the fact that the monster is inside of the boys. The monster is themselves. Simon hears that he never will be able to escape the monster and later that night he gets murdered. But it is random or is it superstition? All of the things we read in the book are “normal”, not paranormal. But this event, is it paranormal? This is one of the issues that come to mind while reading. What was Golding trying to say?

The dispute between Jack and Ralph is also a huge part of the book. If they had not hated each other would the outcome of the book have been different? As mentioned in the introduction, Golding writes about two instincts, impulse versus reason. You could say Jack is impulsive and Ralph is reasonable. And this is why they can not get along, which ends in a bloody spree. When Ralph decides Jack to be the head of hunting he starts with an unsuccessful killing of a pig. “But I shall! Next time! I’ve got to get a barb on this spear! We wounded a pig and the spear fell out. If could only make barbs –” (Page 52). He comes back, feeling accused of not getting meat for all the boys. Here you get a clear look of how Jack is as a person. All he cares about is getting more deadly weapons. He does not want to build shelters, he wants to hunt. On the other hand, Ralph wants to build shelters, make a society where the boys can get along and survive. Jack and Ralph are like night and day. Their priorities are completely different, which leads to the huge battles they have in the book.

In Lord of the Flies Golding plays with the human psyche. He comes to the conclusion that when exposed to situations like this in the book, the human psyche has a tendency to become more barbaric, cruel and harsh. He made it clear to all readers that this is what happens to all the boys. He clearly portrays the darkness inside of us and how it affects us in situations. Golding nicely shows his readers that all human beings have a darkness inside of them, something that only appears during testing times. The author is also focusing a lot on peer pressure and the effects it has on the boys.

You can, while reading, see significant similizes to Romanticism. The era of Romanticism had its peak during the 18th century and the literature was very special. The authors wrote about feelings, the human mind and psyche, they wrote about why people did things, not that they did things. You can see this in Golding’s book, he is very detailed and nuanced when it comes to the feelings of the boys. All the fighting between Ralph and Jack, Simon hearing Lord of the flies and Piggy being an outsider is all examples of how much Golding wrote about feelings. You can plainly see how much romanticism has infected the book and Golding’s writing. He is very careful with his way of writing and as you switch the pages more and more opinions, feelings and thoughts are written about.

William Golding has written a barbaric novel, a realistic novel, but barbaric. I believe he wanted to show the world what it really looked like. He wanted people to open their eyes to what was going on. And Golding succeeded, everyone had an opinion about this book. He wrote a scary, harsh and eye-opening book and he did it well, really well.

Analysis of "Lord of the Flies" by William Golding. (2021, Apr 09). Retrieved from https://studymoose.com/analysis-of-lord-of-the-flies-by-william-golding-essay 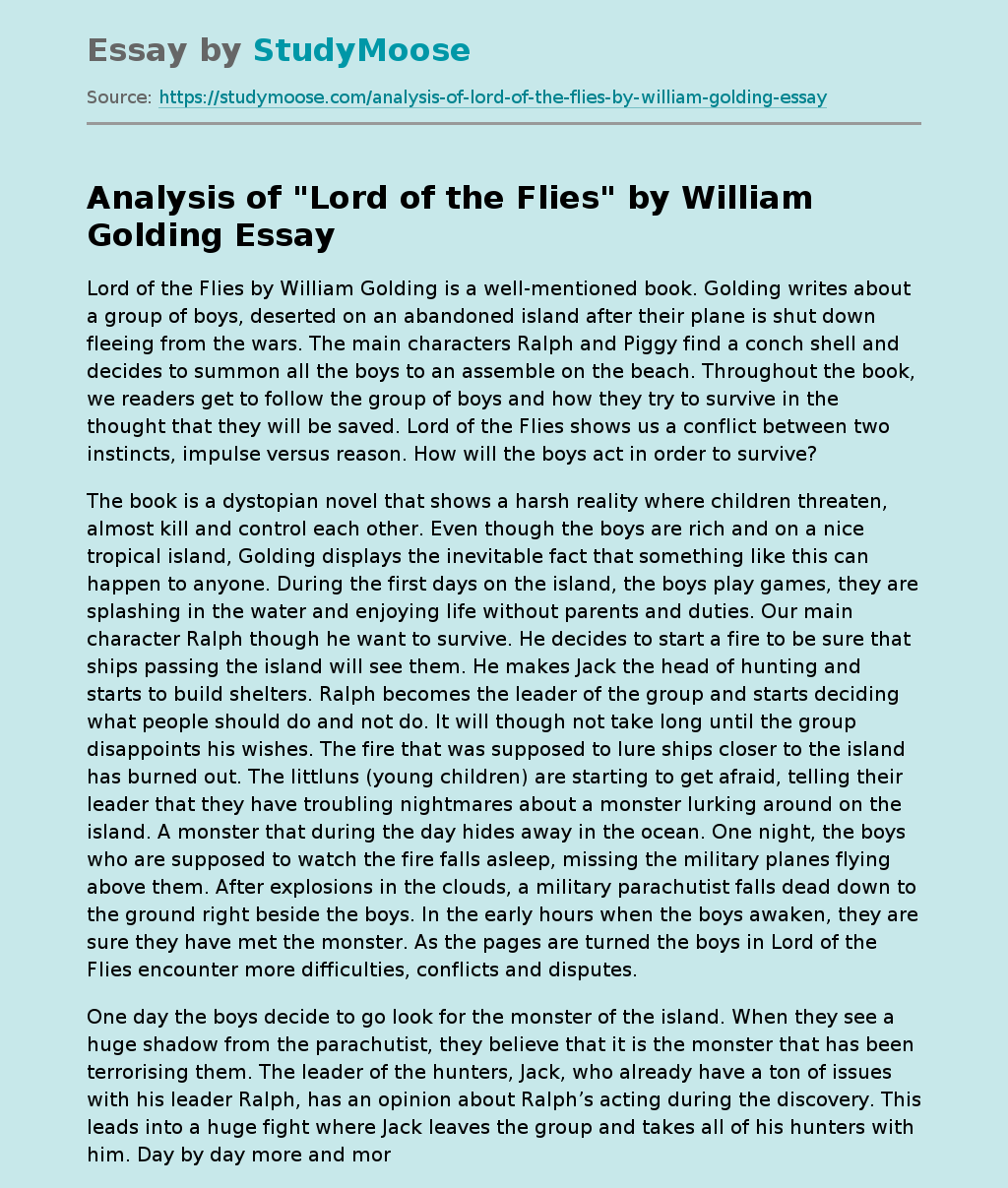