Passage Analysis Essay - The Lord Of The Flies by William Golding

“…. he was thin and bony, and his hair was red beneath the black cap. His face was crumpled and freckled, and ugly without silliness. Out of this face stared two light blue eyes, frustrated now, and turning, or ready to turn, to anger.” This is a description of Jack’s physical self. Apart from the fact that his eyes were to turn red because of frustration, Jack sounds like an adorably cute twelve year old. Just like we are always told to never judge a book by its cover, we should never judge a person based on their physical appearance.

Don't use plagiarized sources. Get your custom essay on
“ Passage Analysis Essay – The Lord Of The Flies by William Golding ”
Get custom paper
NEW! smart matching with writer

Jack Merridew is far from an adorable kid. Behind those pretty light blue eyes lies not a human being but a snake, a dog, an ape. An evil prehistoric man, as described on pages 48 and 49. This passage is important because it plays as an introduction of Jack’s true personality, element that is essential in the rest of the novel. In this passage, it is said that Jack is seduced by the sound of pig footsteps on the ground, showing how obsessed he will become later in the book about death.

The fact that in this passage he does not succeed at achieving his goal, and becomes frustrated, contributes to the brutality in his future hunts and the creation of a celebration dance. It also contributes to Jack’s realization that he cannot do this alone, bringing the rest of the hunters in to his world of mad savagery. The passage is significant to the whole plot of the book, since it explains the involvement of the other boys in the killing scenes and Jack’s blood driven personality.

The scenery described in the passage is also important. It achieves its goal in demonstrating the difficulties presented when being inside the jungle. The dense air that is trapped in between the trees, under their branches makes it a hard place to breathe in. The tangled creepers, branches and bushes in general, make the jungle a hard place to walk through.

Another important aspect of the jungle description in the passage, are the pig runs. These will be important in the future of the book since they are the only “clearing” in the thick jungle and witnesses of the deaths that will occur on them. As said before, the true personality of Jack comes afloat, for the first time in the book in this passage. The way he is described as a snake, is symbolic to the strong evil force in him. Symbolic of how, later on, in the book, he betrayes Ralph and stops at nothing to achieve what he wants.

Complete power over the island and its inhabitants. The description of him as a dog is symbolic of his actions. How he just goes ahead with what his instincts tell him, and not really thinking about the consequences of his actions. He is just driven by the fun and freedom these momentarily provide. And last, but not least, his description of being like an ape symbolizes the decrease of civilization in each and every one of the boys. It is a visual comparison of Jack to a prehistoric animal. How he is going back into the basics of mankind. In conclusion to all the reasons presented, on why this passage is significant in the story of Lord of the Flies, it is to be summarized into just one phrase. This passage is simply an excellent introduction to one of the most influencial characters in the novel; Jack Merridew.

Passage Analysis Essay - The Lord Of The Flies by William Golding. (2017, Sep 19). Retrieved from https://studymoose.com/passage-analysis-essay-the-lord-of-the-flies-by-william-golding-essay 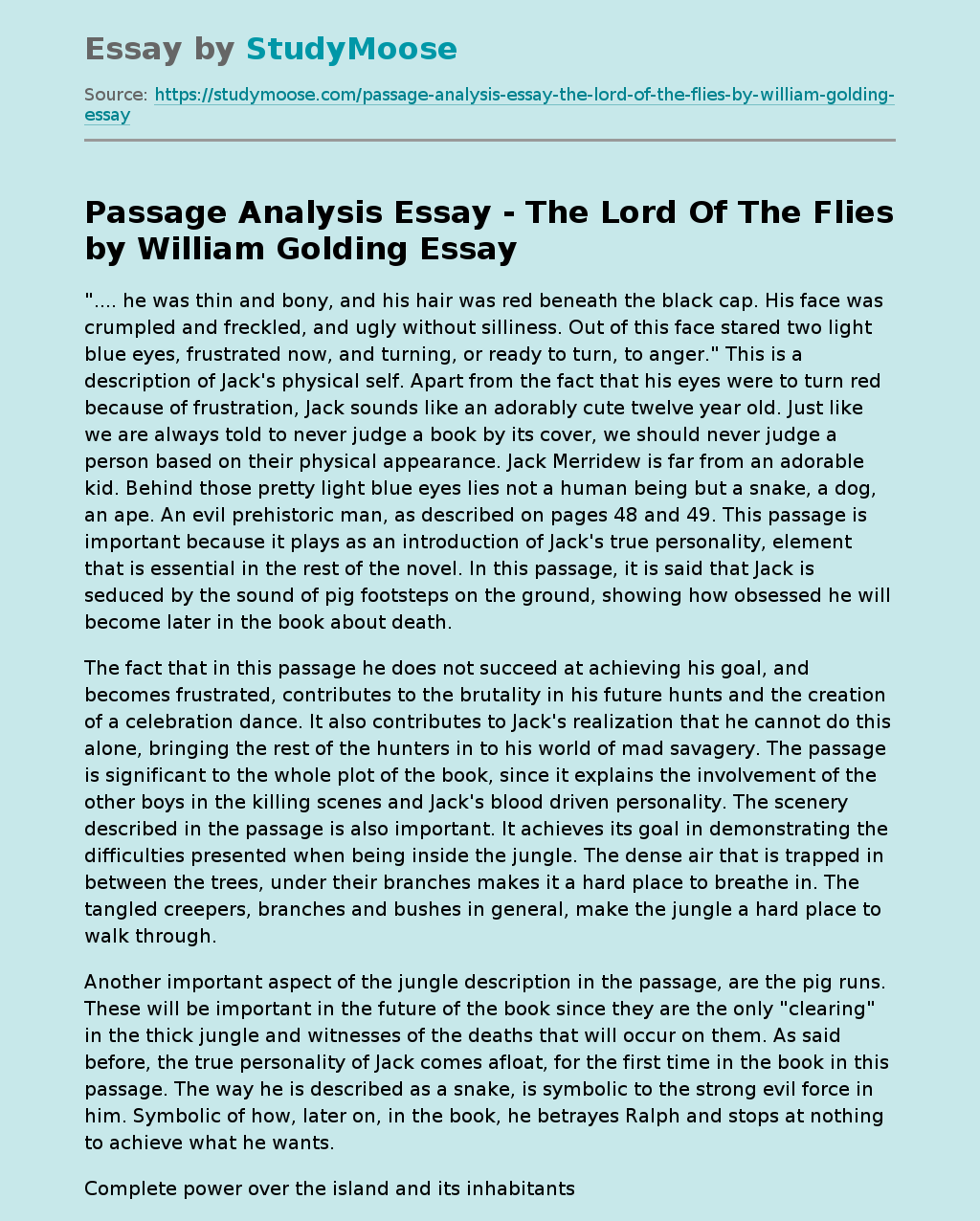