Allegory in a "Lord of the Flies" by William Golding

Allegory is ‘a story in which people, things, and actions represent an idea or generalization about life allegories often have a strong moral lesson.’ In, Lord of the Flies by William Golding, the author uses allegories to represent the cruel violence that in their time adults portrayed during World War II. It served as a role model for the young kids during that time. In the novel, a plane filled with children escaping the war crash on an uncharted island. There is Ralph, Simon, Sam, Eric, and Roger.

Don't use plagiarized sources. Get your custom essay on
“ Allegory in a “Lord of the Flies” by William Golding ”
Get custom paper
NEW! smart matching with writer

These boys must lead themselves on an island without any adults established. The only way that they can survive is if civilization is kept. But, as the order collapses conflict arises. In, Lord of the Flies, the children imitate the actions of the adults who are at war. This event impacts the development of the children through political, religious, and Freudian allegories.

Towards the end of World War II, the world was divided into two sides, the free world and the Soviet Union.

Similarly, in Lord of the Flies, Jack and Ralph represent those two divisions. This novel served as a warning to political leaders of the war, because too much power would lead to destruction. The conch kept the group from destruction. It would help maintain order and civilization. It symbolizes power and authority, and it also represents order and rule of law. For a group of people there must be a leader, Ralph represented as a good leader for the children, ‘All at once found he could talk fluently and explain what he had to say.

He ran a hand through his fair hair and spoke’ (Golding 32). Unlike the dictator, Hitler, Ralph shows natural leadership and is confident to lead the rest of the group. However, Jack and the choir represented a part of government or social organization that would maintain control, but in turn all that power could also be abused and get out of control. Jack stated, ‘“I ought to be chief,”said Jack with simple arrogance because, “ I’m chapter chorister and head boy”’(Golding 22). Jack is like a dictator that has power or seeks to have power. His ambitions leave him arrogant and selfish to only want to achieve what benefits himself . This particularly represents the Nazis of World War II. The Nazis, like Jack and his choir, would lead the group to destruction and would be the enemy of Ralph. Jack and Ralph always has arguments and come to disagreement with one another. They would eventually plot against one another.

Sigmund Freud has a theory that an “unconscious mind governs behavior to a greater degree than people suspect”(McLeod). Freudian allegory has the id, superego, and ego. The id does not think and always is eager to do things compulsively. The ego plans and thinks through the process, and the superego makes the right decisions knowing what they should and should not do. For example, Piggy is the ‘superego,’ the one who follows the rules. Piggy states, ‘“Nobody knows where we we are,’ said Piggy… perhaps they knew where we was going… but they don’t know where we are coswe never got there” (Golding 34). This shows that he was the one who followed the social norms on the island, but it’s shunned among the boys. He’s the ‘superego’ because he has a mind that wants to control the impulsive behavior in the ‘id’, he reminds the others of their responsibilities. Although the other kids want to enjoy their stay at the island, Piggy knows the real priorities, and even though the children may not listen to him, he knows for himself what is best.

Characters in allegories most often personify an abstract quality. In William Golding’s novel, allegories show the superior and the wicked that exists in human beings. What dictating power may lead mankind to be like. Like World War II, Lord of the Flies, show its good and bad environment. He uses allegories like Jack as a dictator/fascist and Ralph representing a good democratic leader. The characters portray a character that represents the political leaders of the world.

Allegory in a "Lord of the Flies" by William Golding. (2021, Feb 04). Retrieved from http://studymoose.com/allegory-in-a-lord-of-the-flies-by-william-golding-essay 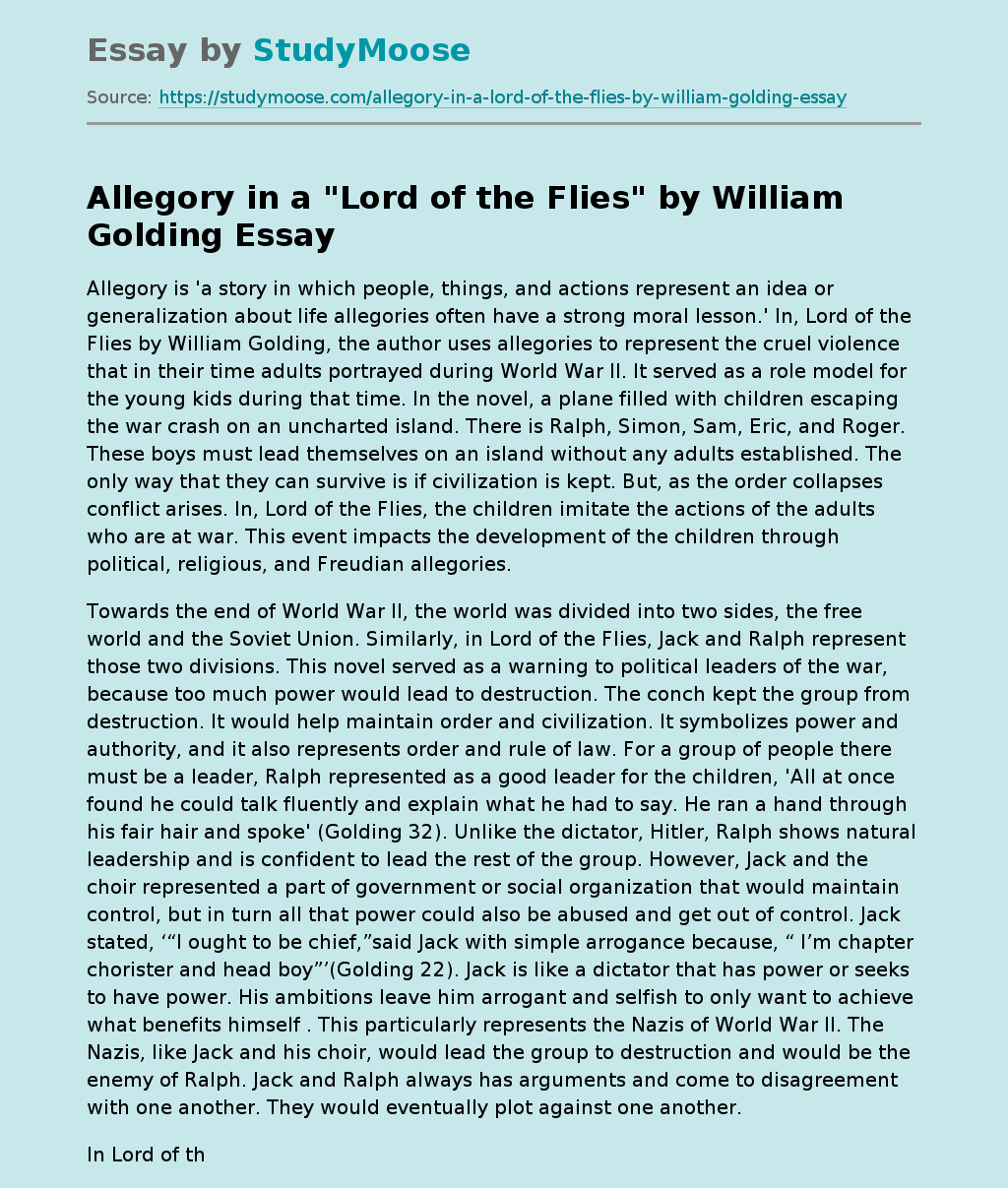